Ever since Fox News Channel fired sex creep Bill O’Reilly last spring, it has been hard to decide who is the most obnoxious “opinion host” of Fox’s prime time lineup.

Tucker Carlson is a candidate for the way he mutters under his breath and makes faces at his liberal guests—a move he pulls most often when they are on a split screen from a remote location and can’t see him.

Hannity also remains among the best at bellicose race-baiting and immigrant-bashing. But because Hannity rarely allows a dissenter to challenge him anymore, he has little opportunity to point his finger and shout “Excuse me! Excuse me!” (it means “Shut up! Shut up!”) the way he used to.

Thank goodness—or, perhaps, thank God—for Church Lady Laura Ingraham, who brings a special boil of bile to her religious fundamentalism at 10 p.m. on The Ingraham Angle, a recent addition to Fox prime time.

She proved her bona fides again this week when her screen showed the headline “Illegal Immigration and Abortion” and she interviewed the immigration lawyer Rachel Self in a remote hookup from Boston.

Ostensibly, the Tuesday night segment was to be about two teenage females from outside the country and a ruling by a federal judge that they were entitled to abortions—not paid for by the government.

But that was just the setup. Instead, Ingraham ambushed Self by turning the conversation to abortion in general. Ingraham’s producers showed on the screen a picture of an infant with a pink bonnet as Ingraham talked over her guest, shouting her down and cutting off her microphone.

“No, no, no, no, no!” Ingraham screeched when Self tried to speak. “If I can’t finish a sentence, we’re going to have to mute the mic.”

Ingraham seemed annoyed early on when Self corrected her. The two, young women in the abortion decision were not in custody of ICE, as Ingraham seemed to think.

After exposing Ingraham’s lack of preparation, Self tried to keep the conversation on a higher plane by reminding the Church Lady that “We’re here to discuss what the judge’s rulings were yesterday.”

But that’s not why Ingraham was there. She was there to propagandize against a woman’s constitutional right to choose to end a pregnancy. Her producers again showed the picture of the baby.

“You’re showing things that I can’t see,” Self said.

“I didn’t show you a hamster,” Ingraham said. “I showed you a baby. A baby. It is a baby. It’s not a hamster. It’s not a piece of tissue. It’s a baby. And it makes you very uncomfortable. That’s why you’re talking over me…A baby is not a disease. Stop talking.”

This was a lie on two levels. First, because Self couldn’t see the photo, she could not be made uncomfortable by it. Secondly, it was Ingraham talking over her guest, not the other way around.

After Ingraham ordered her producers to shut off Self’s microphone, she talked to herself while her producers continued to show Self on the split screen, moving her lips with no sound. It was a cheap shot. Ingraham couldn’t win a fair fight so she rigged it.

Earlier in the week, Ingraham attacked the Boston Globe for refusing to give up the name of a male employee disciplined for sexual harassment. In a leap of logic, she presented this as a double standard because the Globe broke the story more than a decade ago about the Catholic church covering up for pedophile priests.

“These people are phonies,” Donohue said of the Boston Globe. “They’re rank hypocrites.”

On Thursday night, wearing Christmas red to frame her gold cross, the Church Lady took up O’Reilly’s tired old “War on Christmas” crusade by showing a clip from the Charlie Brown Christmas show with Linus reading the Nativity narrative from the gospel of Luke.

When the show made its debut in 1965, Ingraham said, this scene almost didn’t make the cut because network censors were timid about religious content. (And who knew the War on Christmas has gone on since the one in Vietnam?)

Nowadays, Ingraham mourned to her congregation Thursday night, such a program couldn’t get “the green light” because “it would be deemed too offensive or divisive or non-inclusive. Atheists would probably protest or sue.”

Trump, who says he loves his evangelical voters, has tried to hire Ingraham to work at the White House. It is widely reported that Trump speaks often to Fox hosts. Certainly he praises them publicly and calls almost everything else “Fake News.” And Fox folks coo to him, too, on and off camera. It’s a closed feedback loop.

In a monologue this week headlined “How Trump Can Bolster His Popularity,” Ingraham slipped into first person and starting speaking directly to the former reality TV star, who apparently believes that the lies he sees and hears from the Fox propaganda factory are more real than reality.

“I like seeing you out among the people,” Ingraham told the loud, orange-faced, 71-year-old grifter—the kind of city-slick huckster who would pee on your leg and tell you it’s raining. (See: “Reform, Tax.”)

“I like seeing you with children, the elderly, factory workers, volunteers,” Ingraham told Trump, who watches cable TV news up to eight hours a day, according to the New York Times.

She sounded as if she were pitching scripts for TV commercials in his next campaign.

“You can be really charming and you can be warm in person,” Ingraham told Trump, “and it’s time to let more Americans see that.”

Perhaps some can say the same for Ingraham, but she rarely shows any warmth on camera. She often speaks in heavily sarcastic tones and sometimes doubles up her targets as she did with the combination of Latin Americans and a woman’s right to choose. 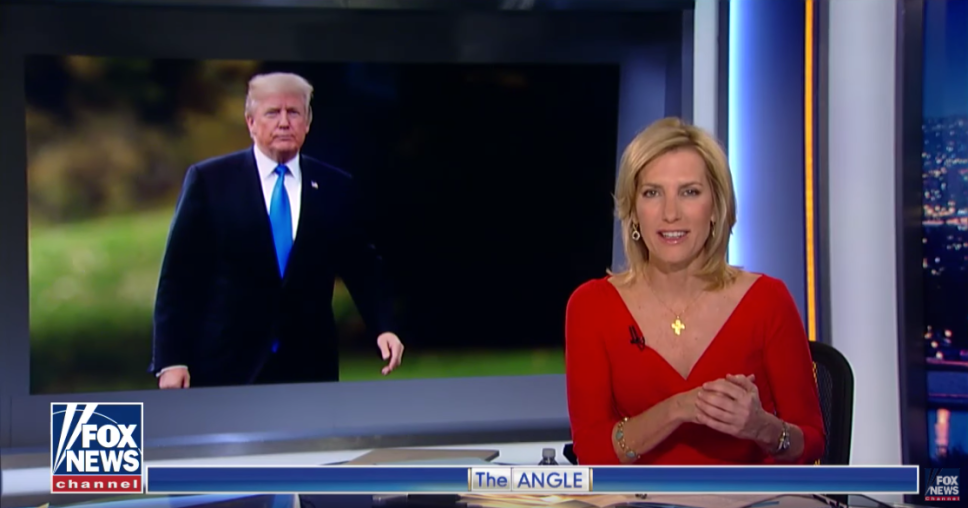