As the 10 p.m. hour played out on Fox News Channel Tuesday night, you didn’t even need to turn on the sound to know that Democrat Doug Jones had upset Republican Roy Moore in the special Alabama election for the U.S. Senate seat to replace Attorney General Jefferson Beauregard Sessions III.

You could see the result in the somber mien of Bret Baier, the primary anchor man at the right-wing propaganda factory. He threw it to the Church Lady, Laura Ingraham, who, wearing her gold cross, interviewed Ralph Reed, the founder and chairman of the Faith and Freedom Coalition.

Reed looked like a sad version of Rev. Lovejoy from The Simpsons. The Church Lady asked Rev. Lovejoy about the Christian evangelical Alabama voters who love Moore because he reveres the Ten Commandments more than the U.S. Constitution.

Even though Moore still led Jones in the vote count at this point, the margin was narrowing. It was time to turn up the sound.

“It looks like it’s going to be tougher now for Roy Moore than a lot of people thought,” The Church Lady said. “He might lose this seat.”

The long-faced Rev. Lovejoy noted that 81 percent of the evangelicals voted for Moore but he had hoped for a higher percentage. Neither dwelled on credible accusations that Moore had inappropriate relationships with several teenage girls when he was in his 30s.

“A lot of ‘em couldn’t hold their nose and vote for Moore,” she said of religious Alabamians.

An hour later—after even MSNBC got around to calling it for Jones—Moore still refused to concede, telling his supporters he hoped for a recount.

“God is always in control,” Moore said in a brief speech carried on all three cable news networks.

“Amen!” came a shout from the audience, followed by applause.

Moore recited a passage from the Old Testament, a Psalm.

“Just wait on God, and let this process play out,” he said. “May God bless you.”

Credit Fox with calling it first, followed by CNN. When MSNBC finally got around to it 13 minutes before 11 p.m., it allowed numbers-cruncher Steve Kornacki to briefly stop waving his arms and poking his finger at red and blue counties on his magic screen.

“Yes!” he said of MSNBC’s late call. “I was wondering when that was going to happen.” The delayed decision, the MSNBC crew stressed, came from their big brothers at NBC News.

The defeat of Moore was a repudiation of the hypocritical fringe of right-wing Republican Bible-thumpers who were willing to overlook accusations of child molestation to support a guy who longed for slavery days and demonized gay people.

Another big loser on Tuesday was Steve Bannon, the shadowy power broker who bet many political chips on this horse-riding, cowboy hat-wearing, pistol-toting zealot who vowed to inflict his version of Christianity on Muslims and everyone else. President Trump endorsed him.

Cable talking heads were quick to point out that this might affect Bannon’s plans to attack incumbent Republicans in 2018 primaries, overthrow the GOP establishment, capture the government, win a war against Islam, and rule the world.

“The long knives will be out for Steve Bannon,” said Joy Reid on MSNBC. “He’s gone down to ignominious defeat.”

Bannon is the former chairman of the Trump campaign and chief strategist at the White House who is back running Breitbart News. Rachel Maddow mentioned Bannon’s talent for self-promotion as the Elmer Gantry of the GOP.

“He’s still the center of conversation,” Maddow said, “even when he blows it.” On CNN, Gloria Borger said, “This political savant, Steve Bannon, has been proven wrong.”

“Steve Bannon was wrong,” Stirewalt said. “What other seats could it cost them?”

On MSNBC, early in the evening, disgruntled Republican strategist Rick Wilson offered analysis of the fissure in the GOP between the Trumpist-Bannonite radicals and the establishment people like Mitt Romney, Mitch McConnell and Paul Ryan.

He warned of “the delusional bubble around Trumpism” and he called Bannon and Trump “the cancer that’s eating them.

“Those two people… are chewing their way through the carcass of the GOP and they don’t care about the damage,” he said.

Perhaps the most unintentionally wry comment of the night came during Hannity on Fox in the 9 p.m. hour when the camera at hopeful Moore headquarters showed a supporter waving a sign that said, “In Your Heart, You Know He’s Right.”

Voters of a certain age will recall that phrase from supporters of Republican Arizona Senator Barry Goldwater, who lost to President Lyndon Johnson in a landslide in 1964. That year, Democrats trumped Goldwater’s slogan with a response that suits Moore: “But In Your Guts, You Know He’s Nuts.” 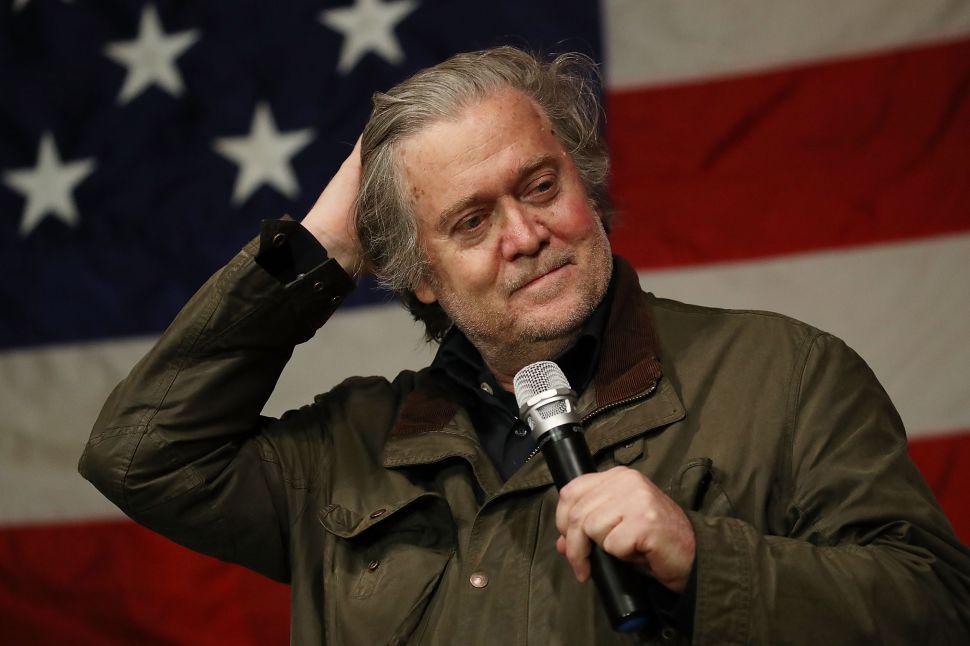