It’s a story that’s certainly shrouded in mystery, and one that has some familiarity to it.

“Yes, this is out there in a lot of forms, but it’s never been told in quite this way,” says TV producer and screenwriter Dominic Minghella.

Minghella is talking about the legend of the Knights Templar, the powerful, but much maligned catholic military order featured in the History Chanel’s new series, Knightfall.

The series begins after the fall of the city of Acre, the Templar’s last stronghold in the Holy Land, where the Holy Grail is lost. Years later, a clue emerges suggesting the whereabouts of the Grail, which sends the Templars on a life or death mission to find the lost cup of Christ. The ten-episode event moves from their battles in the Holy Land, to their clash with the King of France, to the dark events leading to the demise of the Templar Order on Friday the 13th, 1307—a date which has become synonymous with bad luck.

Focusing on themes such as belief, sacrifice, politics, love, power and revenge, the series goes deep into the legendary brotherhood of these warrior monks to uncover who they were, how they lived, and what they truly believed.

To tell this story, Knightfall showrunner Minghella and his creative team took what he calls a “bold choice” with the narrative. “We started this story near the end of the heyday of this group, so you have this sense of impending doom.”

But the story of their demise is familiar in more ways than just historically. “You also get that is quite modern in that we deal with things like the Knights having this great wealth and no real direction,” said Minghella. “They suffer from what would be considered PSTD, if they had such things in that time, and we weave a story that really shows the animosity between church and state via some very complicated relationships.”

A major part of the storyline features the Knights on a quest to acquire the Holy Grail, which Minghella realizes is an oft-told tale. But in this case, he insists, “What makes this take different is we’re telling a smarter story that pays proper respect to the big truths. Yes, they’re hunting for the Grail, which in this story it’s the greatest thing you can have and it will change everything, but we ask more questions about the why of this journey—like, ‘what are we here for?’ and ‘Why are we doing this?’ There is a lot of searching, but not all of it is simply looking for the Grail.”

In addition to taking this novel tactic with the narrative, Minghella says that the battle scenes have a unique approach as well. “When we thought about the battle sequences we really wanted to show what it was like to go fight in a first-person way. So that was the inspiration for putting the camera right into the helmet of one of these warriors; so people who watch this would actually be right there, in someone’s head. We wanted to deliver the feeling of really fighting a battle so we went for it. We didn’t shy away from showing what those guys really felt.”

But while the filming techniques may offer a new take on the age-old tale, the productions details are historically accurate to the 14th century. “We found a way to cheat the chains that they wore with rubber ones. Those rubber ones looked absolutely real to me, but then it turned out there were some lighting conditions where you would see that they weren’t metal,” Minghella related. “And, we found out that because they weren’t metal the actors moved differently, like too easily, so we decided that the best way to be authentic was to use real chains, which weighted a ton. Those poor actors were running around in those heavy pieces but we all felt it was worth it to take the audience to that place.”

This choice led to one issue that could have turned catastrophic, revealed Minghella. “I think it was on day one of shooting, we had an actor, heavy with all those chains, fall in the and it was like a minor emergency to get him out, but we did and everything turned out ok.”

Minghella says that now is a good time to queue up the series because, “You look out into the world and you see an incredible amount of religious pain and everything seems to have originated in Holy Land. It seems like all of our problems come from there. This is the kind of story—intriguing and dramatic—that resonates because of the issues that still exist. We have Trump, and his very suspect tweets, so there are definitely some similarities between the craziness that was going on then and what’s going on right now.”

Mostly, Minghella feels that viewers should tune in because, “Many people know about the Knights, but they don’t know the whole story and this series can remedy that. My hope is that people will watch this, because it really is such an important part of history and then I would encourage people to go and have their own relationship with the material, to learn more about these men, because all of it is really quite fascinating.” 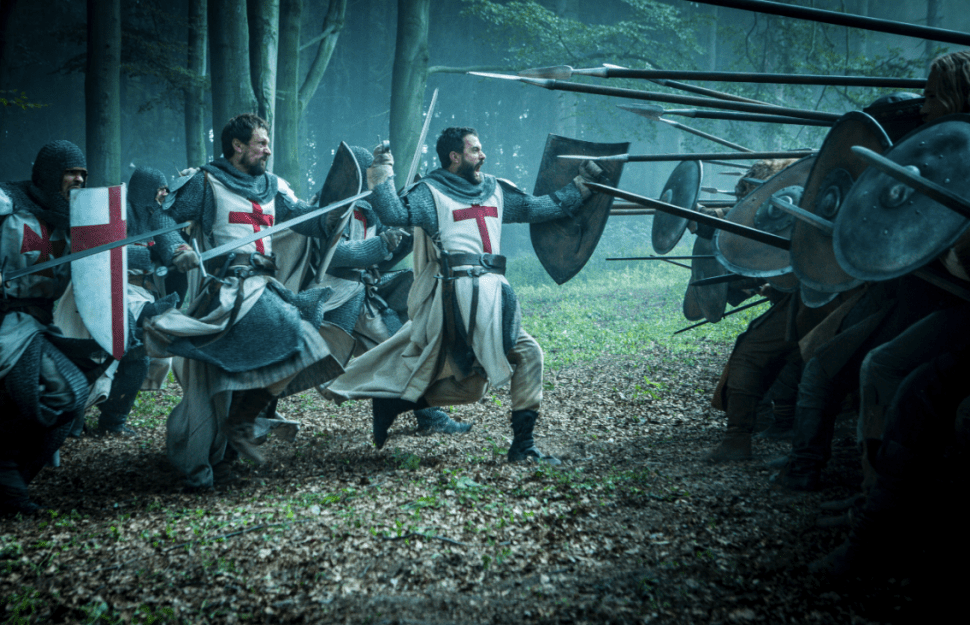