The United Nations was established as an institution that would provide certain essential services to needy people all over the world. Today, that institution is fraught with problems. Votes, resolutions and the general goings on in the General Assembly are a classic example of what is wrong with this institution.

There are 193 member nations and two permanent observers of the United Nations General Assembly. Of all those many nations, only about fifteen are real democracies and another fifty-five—sixty if you really stretch the definition—can be considered flawed democracies.

The math is as simple as it is scary. The majority of member nations in the United Nations are authoritarian, autocratic regimes that include monarchies and dictatorships. A number of democracy indexes track these issues, and verify this truth.

The venerated United Nations has become a bastion of anti-Israel and anti-U.S. sentiment. And because it is the United Nations, that hatred is given credibility; dressed up in the guise of justice.

Israel has the right to determine its capital and the United States has the right to decide where to put its embassy and whether or not to recognize a country’s capital. Had the discussion been about any other country’s capital, it would have been a blip on the news cycle. Because it is about the hot button issue called Jerusalem, Israel, the discussion has been exaggerated exponentially and reached global proportions.

The United States government is correct to feel insulted. It is understandable that one of the greatest nations in the world and by far the largest supporters of U.N. wants to “take names” in a vote against her. There is no reason for the U.S. to support countries that choose to publicly teach the United States a lesson.

At the last cabinet meeting of 2017, President Trump said, “For all these nations, they take our money and then vote against us…We’re watching those votes. Let them vote against us. We’ll save a lot. We don’t care.”

When U.S. Ambassador to the United Nations Nikki Haley said that the U.S. “will be taking names,” in essence, she was saying that there are consequences to decisions. She was pointing out that one need not agree or like what the United States does, but one cannot expect to publicly berate the U.S. for its policies and continue to expect to receive money and support from the U.S. government.

Critics of the United States may call her “patronizing.” Well, yes. That is the point.

The U.S. is a “patron” of the United Nations and of many of the countries voting on the resolutions that pass through the General Assembly. Patrons provide money and support. The word in Latin word and in English shares the same etymology, “patra” or father. The U.S. is a patron, a father figure, a supporter and a donor. The U.S. is acting the part.

So is Saudi Arabia. On Wednesday, the Saudis summoned Mahmoud Abbas, the Palestinian President, to Riyadh. They didn’t ask him to come, they summoned him to come, and he speedily did. Once in Riyadh, the Saudis gave the Palestinian leader guidance. Saudi Arabia, as well as Israel, has determined that Abbas has thrown out the playbook for peace and is walking away from the designated rules of interaction, using President Trump’s declaration on Jerusalem as his excuse. Never mind that while President Trump declared that Jerusalem is Israel’s capital, he never said that Jerusalem cannot be the capital of a Palestinian state.

The Saudis are not happy. They are pressuring Abbas to come back to the fold and play by the rules.

The Palestinian Authority and all those other nations who think they can get support elsewhere are mistaken. In 2015, under the Obama administration, the U.S. gave the Palestinian Authority nearly a billion dollars in aid. It came in the form of the standard $300 million they always receive plus USAID, and monetary assistance for development, anti-narcotics programs, education and police training. That’s a lot of money.

Other nations have promised aid, but few have come even partially through. And when they do, they rarely pay on time. The U.S. delivers on its pledges.

When the United Nations was created, real strength was given to the Security Council and to its five permanent members. Luckily for the world, that still holds. The General Assembly is a feel good assembly. It has no power and the resolutions it passes have no authority. When a majority made up of autocratic countries, dictatorships and monarchies vote, they will always band together against democracies like the United States and Israel. 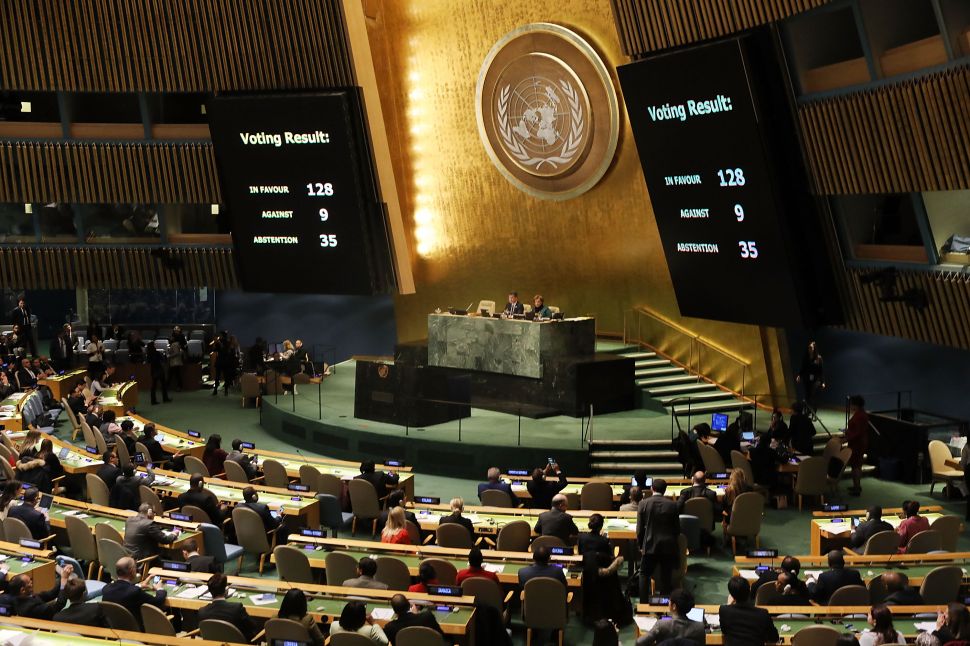