It’s a popular parlor and social media game these days to compare Donald Trump to various dictators. This is tempting, given our 45th president’s indulging in authoritarian habits like rage-tweeting at Federal agencies he dislikes, or showing disregard for the rule of law when it gets in his way. Americans are unaccustomed to casual flirtations with dictatorial-sounding memes like crushing CNN bloodily with Trump’s shoe, and many of them never want to normalize such conduct.

More hysterical anti-Trumpers jump immediately to Adolf Hitler, a ridiculous comparison as well as a violation of Godwin’s Law that says more about them than President Trump. Some prefer Benito Mussolini, who like Trump had a pronounced absurdist side as a dictator manqué who never accomplished much of substance. A more recent Italian leader, Silvio Berlusconi, seems a better comparison, since like Trump he boasted luridly of his sexual conquests and acted like the louche, ineffectual billionaire he was. However, Berlusconi never really set out to do much of anything except gain power, whereas Trump preaches nonstop about his alleged desire to Make America Great Again.

The best comparison is one that won’t be too familiar to many Americans and is frankly disturbing. The dictator whom Donald Trump most closely resembles is Slobodan Milošević, the Serbian strongman who pushed Yugoslavia off the cliff over a quarter-century ago, unleashing wars and genocide, then died in The Hague in 2006 while on trial for war crimes. Although Milošević was front-page news throughout the 1990s, since his death he has faded from Western consciousness. Therefore, it’s worthwhile briefly revisiting Milošević, since his similarities to Trump are startling.

First, let’s get out of the way how Milošević and Trump were dissimilar. While the latter is a much-married reality TV showman who lives for the camera and can’t shut up or stay off social media, the former was a colorless Communist functionary, a private man devoted to his wife and possessing a somewhat dour demeanor. As social personalities they could not be more different.

Yet a cursory look at their political personalities reveals troubling likenesses. Like Trump, Milošević made his name in finance, playing shady games with other people’s money, and got ahead in the Yugoslav system due to personal connections more than professional acumen. Milošević, like Trump, casually used people, even his closest friends, and discarded them when they were no longer needed (at the end of his regime, Milošević had his former best friend and mentor assassinated); loyalty with both is a one-way street.

Milošević’s sudden, unexpected rise in the mid-1980s would be eerily replicated by Trump three decades later. After the death of the longtime Yugoslav party boss Marshal Tito in 1980, the country entered terminal decline. Yugoslavia was deeply in hock to foreign banks, its ailing economy having grown dependent on infusions of Western cash to keep running, and by the mid-1980s Tito’s Ponzi scheme was collapsing. As a result, unemployment spiked and average Yugoslavs, who had grown accustomed to near-Western levels of consumer comfort, saw it all evaporate before their eyes. Fury followed.

Given such economic turmoil, political ferment burst forth, and in multiethnic Yugoslavia, that inevitably took on nationalist coloration. Serbian nationalism, taboo for decades under Communism, emerged from under the ice in the mid-1980s with dangerous passion. It’s difficult to rationally see why Serbs felt aggrieved. They were by far Yugoslavia’s biggest ethnic group and by any accounting they dominated the country. Despite far-reaching Communist efforts at what we would term Affirmative Action (they called it the “ethnic key”), ensuring that minorities got proportional representation in jobs and sinecures, Serbs still held most of the big jobs in the Communist hierarchy and its institutions, and they dominated Yugoslavia’s military and security structures.

Nevertheless, many average Serbs were angry by the mid-1980s, watching their economic security disappear as they faced demographic decline. This came to a head over Kosovo, an autonomous province of Serbia that between the 1950s and the 1980s went from being two-thirds Albanian and a quarter Serbian to 80 percent Albanian and barely 10 percent Serbian. Since much of Serbia’s history was tied up with Kosovo, this demographic decline was met with horror in Belgrade, where many Serbs portrayed it as an Albanian conspiracy to drive them out.

By 1987, the Kosovo issue dominated Serbian politics, and out of nowhere Slobodan Milošević, a rising party boss, jumped on the nationalist bandwagon. He had never shown the slightest interest in nationalism, personally or politically, and seemed devoid of ethnic ressentiment himself, yet he realized that the issue was his ticket to power. Suddenly Milošević made himself the public champion of the beleaguered Serbs of Kosovo, promising them he would defend their rights. Overnight, Milošević became a sensation—the first politician to break official party taboos about embracing nationalism—and a hero to angry Serbs everywhere.

He cleverly employed nationalism to take power over Serbia and eventually even Yugoslavia. By late 1989, Milošević was the master of the country, the powerbroker of a state in terminal decline. Institutions that stood in his way—Yugoslavia’s Federal political system, the military and the security services—were attacked, then purged of opponents, then re-staffed with Milošević pawns and cronies.

What the novice strongman didn’t plan on, however, was the rise of competing nationalisms against Serbia. The threat of Serbian chauvinism terrified Albanians, and soon Croats and Slovenians too. Old enmities returned. In the summer of 1991, Slovenia and Croatia declared independence from Milošević-dominated Yugoslavia, dooming the federation and birthing a series of ugly ethnic wars that plagued the region until the end of the decade. Today, most of the former Yugoslavia remains poorer, more corrupt, more ethnically divided, and more crime-ridden than it was then Milošević grabbed the axe of Serbian nationalism and used it to chop down the country.

Milošević ruined Serbia just like he ruined most of Yugoslavia, inflicting political, social, and economic wounds that show few signs of healing even now. In truth, he never cared about Serbs, he merely wanted power. Cynically donning the cloak of nationalism, he fooled Serbs by telling them what they wanted to hear: I will protect you. I will defend Serbdom. I will restore prosperity. None of it was true. His plan to Make Serbia Great Again was nothing but a charade. Once he achieved power, Milošević really didn’t know what to do; he was better at fiery rhetoric than reality. As a result, Milošević improvised crisis after crisis and left behind a broken and impoverished Serbia, smaller and weaker than it was before the First World War.

By the time Serbs figured out they had been conned, it was too late; the country was already wrecked, and Milošević managed to hold on until the fall of 2000, thanks to his control of the media and the police, enriching his family and his hangers-on every step of the way. That he was eventually extradited to The Hague to face justice seems inadequate compared to the devastation which Slobodan Milošević left in his wake.

You can understand the remarkable rise of Donald Trump in 2015-16 by simply exchanging “Serbian nationalism” for “white nationalism”: the parallels are eerie and disturbing. Trump, who never had shown the slightest interest in the plight of the white working class while he built his flimflam empire of gauche condos and casinos, suddenly reinvented himself as their champion. By telling angry and alienated people just what they wanted to hear, Trump created a political movement overnight and mysteriously rode it right to the White House.

Now that’s he’s there, President Trump has failed to deliver on his grandiose promises to his base. Chants of “Build the Wall” to preserve America’s current demographics have gone silent, while Trumpian populism turns out in practice to mean a cabinet packed with Goldman Sachs alumni and tax cuts for the rich. At this point, Trump’s manipulation of white nationalism seems every bit as cynically dishonest as Milošević’s Serbian patriot act.

So far, of course, America has avoided the fate of Yugoslavia. We’re a much bigger and richer country, and our economy, for all its structural problems, is a lot less troubled than Yugoslavia’s was in the 1980s. That’s the good news. The bad news is that Donald Trump has opened the same can of ethno-nationalist worms that Slobodan Milošević did, and if he keeps stoking those fires while doing nothing for his angry and alienated base, America could yet wind up resembling Yugoslavia a lot more than anybody sane should want. 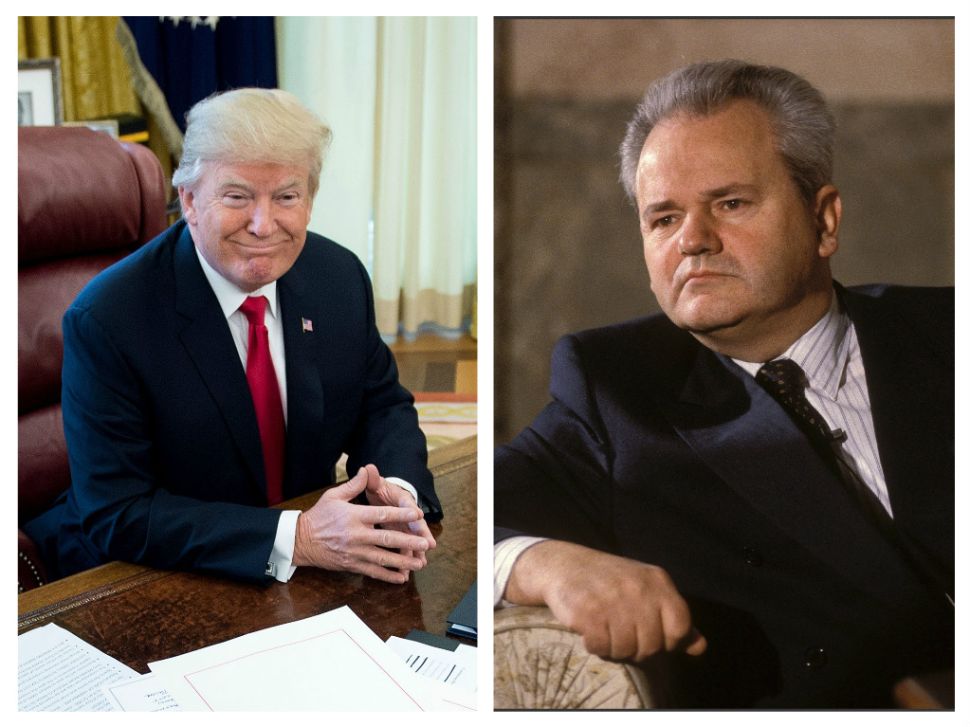