Having saved the world hundreds of times in the last fifty years, one could argue that the Justice League is pretty good at their job. But the DC universe is not what it was in 1960- or so says Christopher Priest, the writer behind a new Justice League run whose lead issue, Justice League #34, with art by Pete Woods, hit shelves on December 6. Priest spoke with Observer about TK and making comics political.

You often inject politics quite explicitly into your superhero writing. How did that start?

I started doing that because I was tasked with reconceptualizing the Black Panther character for Marvel Comics, which resulted in the more strategically capable and politically manipulative version of the character. I thought to myself, if this man is an African monarch, there are certain preconceptions the average American—white or black—will have about him and his country.

So, if this African political leader becomes embroiled in an American stateside scandal (the premise of my Black Panther launch), there would logically have to be a political component to the narrative. We chose to express that component with warmth and humor through the character of the Panther’s State Department handler. The Black Panther series was never really about the Black Panther at all. The State Department guy, Everett K. Ross, was the series protagonist, so politics was simply a logical part of the character’s tool set.

Beyond that series, I don’t think I’ve tinkered all that much in politics, although there seems to be an expectation that I will. Our new Justice League book carries a heavy political overtone. An innocent bystander is killed during a League mission, prompting a Congressional inquiry. Congress’ investigation widens as we go along, not because there’s anything to investigate really, but because our storyline wakes America up. America wakes up and realizes it’s no longer 1968, the benign Silver Age of comics where everybody in Comic Book Land was white and middle class, and the average (white) man on the DC Universe street cheered as the heroes flew by.

That world no longer exists. In our new Justice League, the heroes do a flyby to cheering crowds, but the next minute a disgruntled police officer who’d been blamed for a bystander’s accidental death leaks deeply disturbing body cam footage of the Justice League botching a rescue attempt. The video goes viral, and now the League is under pressure from social media—the tail wagging the dog of political movement.

Congress goes after the Justice League—not because they want to or even because there’s any real reason to—because their polling tells them to. And these are legitimate questions: which agency has oversight of costumed heroes? Where’s the public disclosure about their orbiting satellite weaponizing space? Who owns that airspace, anyway? Teleportation technology comes under scrutiny: if they have it, shouldn’t they share that with the government in the name of national security? Shouldn’t they install transporters in hospitals, refugee centers, etc.?

I chose that creative direction because, while it’s been done quite a bit at Marvel, this has been less explored at DC and not within the current post-Obama political landscape.

Last year your work on Deathstroke for DC, which was your first comics work for Marvel or DC in ten years, was nominated for an Eisner. How did that feel after being out of the business for a while?

I’m deeply grateful to the voters who considered my Deathstroke run. I was really, really surprised. Most people don’t realize that, when we were producing Black Panther, Quantum & Woody, and Steel, fairly few people were reading those titles. We were constantly threatened with cancellation.

Steel, particularly, was an evil little joy: The series was brilliantly drawn by artist Denys Cowan and finished by legendary inker Tom Palmer. It was, maybe, some of the best fun of my career; Denys and I kicking the shins of DC Comics and Superman in specific, and the entire genre in general. The John Henry Irons character was based on Denys’s and my good friend, the late, brilliant writer Dwayne McDuffie. I was writing Dwayne and Denys was certainly drawing Dwayne. It was poignant and hilarious, and everything in between, and nobody noticed.  I’m really not used to people paying attention to my writing. It’s a little scary for me because, now, I have to factor in the possibility someone may be reading this stuff.

You’ve said that this is the first time you’ve been offered the opportunity to write some of these “big gun” characters by DC. Why do you think that is and how did you get approached to write Justice League?

Thirty years ago, artist M.D. Bright and I produced a comic titled Spider-Man vs. Wolverine. It sold a bajillion copies, and we both thought, well, this is it, here we go: we’re in, now. But the office ramble was, “Well, anybody can sell a bajillion copies of a fight between Spider-Man and Wolverine.” And I agree with that.

Now, with due modesty, it was some of the best writing of my career. It was a very, very strong piece of work and is now an expensive collector’s item. But Marvel never offered Mark and I a sequel. And, when we pitched a sequel, we were soundly turned down. Why? Because we were not considered “name” talent. “Name” talent equates with big sales. Well, we sold half a million comic books, but then they had another excuse—anybody can sell a bajillion copies of a fight between Spider-Man and Wolverine—so we were still not “Names.” If it sounds like whining, that’s because it is. For me, for my whole career, the goal posts keep moving.

I want to be clear: I’m incredibly grateful to DC, especially, for their support and creating the opportunity for me to return to this business. I’m just saying, as a general observation, the way the decks get shuffled in this industry could bear some scrutiny. I’m 56. I’m running out of time to be taken seriously in this business. That’s a scary thing to say because, in this business, you can be punished for having said it.

As a member of the Justice League, Batman is often written as an infallible master planner but in your first issue he makes a bunch of mistakes. What made you want to take Batman in a different direction?

He makes one mistake. The other problem in the issue is caused by somebody else. I love Batman. I’ve waited my whole professional life to write Batman. But I don’t believe in this business of Batman being in the Justice League. It’s wrong for the character. He wouldn’t want to be there; he wouldn’t even like those people. Batman has a singular mission and focus: avenge the death of his parents.

So, I’m not writing Batman in the Justice League. I’m writing Bruce Wayne in the Justice League. He is Wayne on-camera more than he is Batman. And when he is Batman, he is often aloof, isolated, alone, withdrawn. He’s off somewhere thinking, strategizing. In the comics, Batman is way overexposed; he’s doing way too much. All I’m doing is writing to that reality: if Batman really were doing as many things each month as he seems to be doing, that would have a dramatic impact somewhere. Well, here it is, and it is this one mistake, in Justice League #34, that sets the dominoes falling for the entire team, changing them forever.

If you could add one DC character to this Justice League team, who would it be and why?

Well, Steel, because I’d love to write him again. It feels like they swapped Steel for Cyborg—which is just me being obnoxious because I haven’t read a lot of this stuff. But Steel was The Armored Black Guy Who Fixed Stuff. Now, isn’t that Cyborg?

Cyborg is a real challenge for me because so many black creators have my email address. There is some expectation that because I’m the first (okay, let’s not start that fight again) black writer in superhero comics—“the Godfather of Soul” of superhero comics—that I’ll have some magic formula to reimagine Cyborg the way I did Black Panther.

Aquaman can be seen driving a bus in this first issue of Justice League you’ve written. Does Orin have a bus driver’s license? Who let him behind the wheel of that thing?

Oh, I’m the one with a bus driver’s license. I quit comics in 1988 and trained as a bus driver. I used to drive those big Greyhound coaches out of New York Port Authority and down to Princeton New Jersey. It was, hands down, the best job I ever had and I profoundly regret having left it. I kept that job the entire time I was on staff at DC Comics in the ’90s. I had seniority by then and could choose a split shift that allowed me to drive the bus into the city in the morning, go to my day job, and drive the bus out in the evening. Visitors to DC Comics in those days would routinely see me dressed in my bus driver’s uniform. Which is way more than anyone ever wanted to know about me. 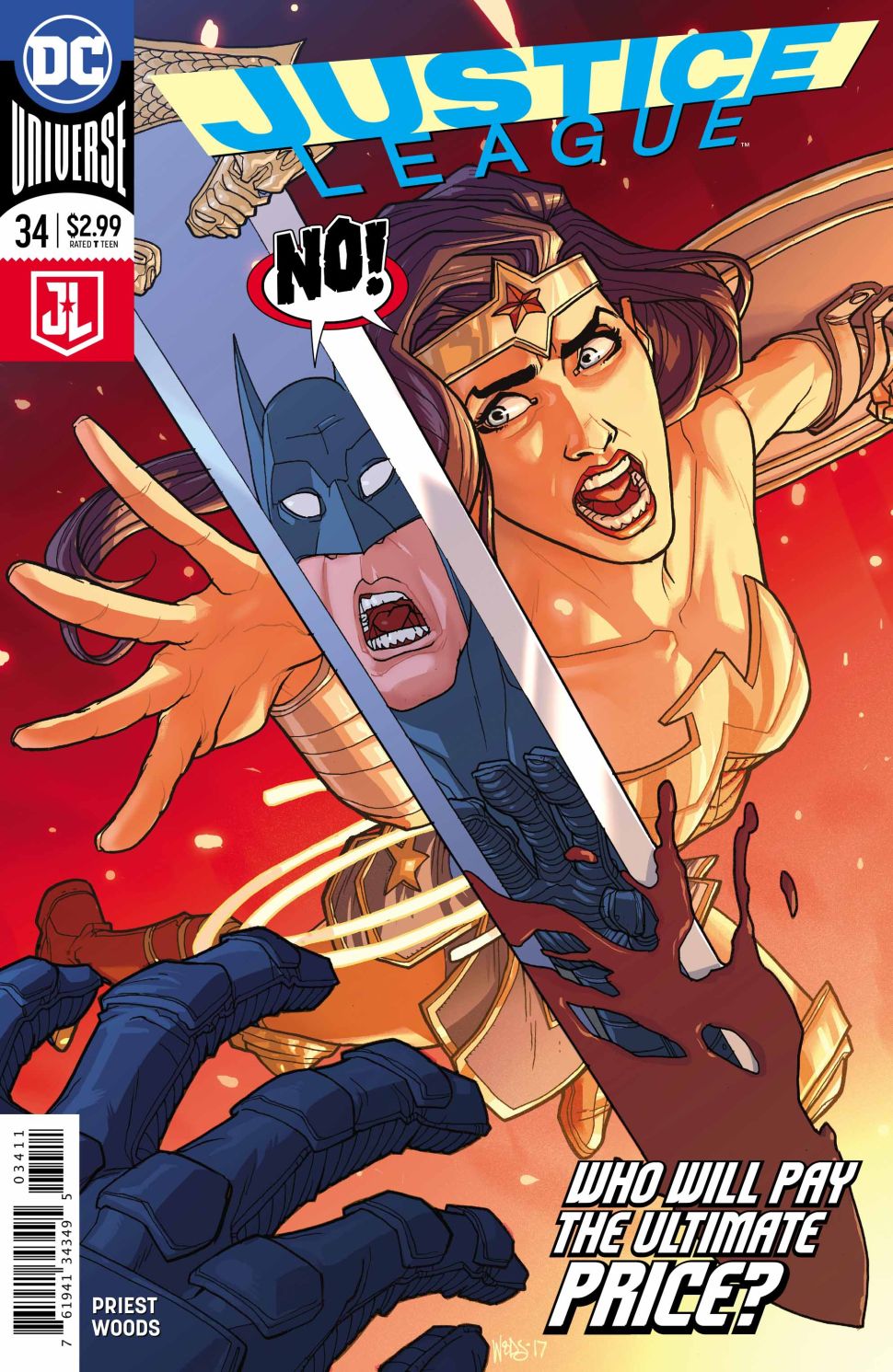