It’s said that everyone has a double somewhere. So, is there really someone out in the world that looks just like you? A new series takes this very thought and spins it into a dark, twisted espionage thriller.

Counterpart is the story of a mysterious world hidden beneath the surface of everyday existence. The series centers around Howard Silk, a lowly cop in the bureaucratic machinery of a Berlin-based United Nations spy agency.

A curious incident some 30 years ago caused a split in human existence that resulted in giving everyone a clone. The two versions of Howard have been living parallel lives, in very different universes. Not everyone is in aware of the division of worlds, with only a few high-ranking officials on either side of the divide in the know, which leads to some master manipulation on both sides.

There have been other shows about parallel lives, with the recent series Fringe coming to mind, but as creator, writer and executive producer of Counterpart Justin Marks pointed out at a recent press event, “I’ve heard this comparison and I think the reason why this feels so different is because ultimately our inspiration for this show came from a different genre which was less the science fiction side of it and more the traditional British spy fiction genre, like John le Carré or Graham Greene. So, we applied those tropes to this story and then sprinkled our science fiction over the top.”

The Berlin setting gives the series part of its le Care feel, explained Marks. “From the very beginning we knew it had to take place in Europe. We apply a bit of a Cold War allegory toward it and it just wouldn’t be the kind of thing that I would want to see in L.A. or New York or San Francisco. And, I think there’s something to be said for doing a show in an international setting, with an international cast whose faces we haven’t seen all the time in the United States that makes it stand out from the marketplace. That was a very important thing for us.”

Marks comes from the feature world having recently worked on the Top Gun sequel. Transitioning to television he says, “As a feature writer who’s used to not putting on pants to go to work and doing it all alone all the time, to come into a room with other writers of diverse genders and ethnicities and nationalities who aren’t all just carbon copies of me, I could sleep well every single night. No story problem was a problem, because at the end of the day, I knew that I had six other people who were going to help me solve that problem.”

The complicated storyline required some intricate note-taking and plotting on the part of the writers, said executive producer Jordan Horowitz. “One of the first things I remember seeing from the writers was essentially a physical handbook, that was kind of an instruction manual [for the show]. They had taken the care to photocopy it like 1500 times, and it was just kind of all beaten up. It was a physical document [of what was happening] and I remember getting it and saying, ‘oh, man.’”

Given the nature of the narrative, many of the actors play dual roles, like co-star Olivia Williams (Manhattan, Victoria & Abdul).

“There were certainly technical challenges [in doing that],” admitted Simmons. “There were scenes involving both of me—sometimes just one on one and sometimes with other actors. We ended up trying a variety of technical ways to make that work and some of them were more sort of intrusive into the process of acting, and some of them were more seamless.”

Williams talked about how she was constantly evaluating the mindset of the two individuals she was portraying. “For me, what was interesting about it was [asking the question]: what would it do to you psychologically to find that something has befallen your counterpart that is awful, and what form of empathy do you have for yourself? It raises amazingly philosophical questions that a therapist would have trouble sorting out. That was my [take].”

Reflecting on his work up to this point, and how he’s using those skills in this role, Simmons said, “Starting when I was doing summer theater in Montana when I was in college, most us got to do the leading man one night, a chorus boy the next night and a character actor the next night. So being able to do two different versions of the same guy in the same place at the same time makes for a really exciting and interesting day at the office.”

He added, “That pinching yourself thing? I do it on a regular basis. It never occurred to me when I fell in love with being on stage at the Bigfork Summer Playhouse in Montana in 1970-whatever, that I would be in front of cameras and that large numbers of people would actually be watching my work. And, yes, the offers, especially in the last three years, have increased exponentially. I get a lot of offers and this was one of the great offers that came my way. Having a real variety of opportunities is something I’ve always cherished and one of the things that makes me feel like I’m not doing the same thing all the time, even at my advanced age. It’s an ongoing thrill.”

As a final thought, Simmons uttered thoughtful comment about working on Counterpart, saying, “It was a process and a learning curve, as indeed life itself is.” 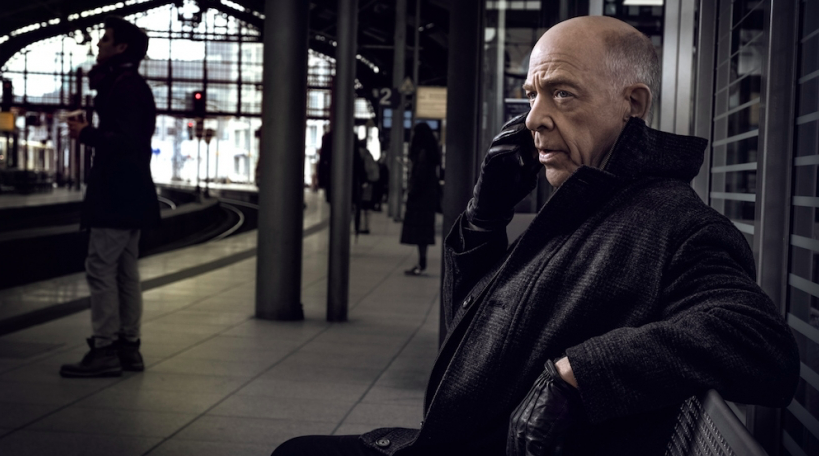