All NYPD officers and detectives on patrol will be outfitted with body cameras by the end of 2018—one year earlier than the city scheduled, city officials announced on Tuesday afternoon.

The de Blasio administration and the police department initially anticipated officers would receive body cameras by the end of 2019.

O’Neill told reporters at the 79th Precinct in Brooklyn that the NYPD looked at research and policies around the country.

“We weighed all the benefits and we did our due diligence, and I’ve been a cop for more than 35 years,” he said. “And I know that in some situations, these cameras have the great potential to de-escalate rather than to escalate. And I know that the footage that’s captured overwhelmingly benefits everyone. We’ve seen that already in the thousands of interactions these cameras record every day in New York City, and we’ve certainly seen it in camera footage we’ve released to the public so far.”

When asked how the police department was able to accelerate the program, he said they did it by placing more emphasis on it.

“We’ve made it a priority,” O’Neill continued.

De Blasio noted that it is unusual to see initiatives rolled out sooner than anticipated in government.

“You know that you’re gonna be wearing that body camera, your actions are going to be seen by all… this conforms with a bigger vision we’ve had of reform and change in this city and in this department,” the mayor said.

As of Jan. 26, the NYPD has deployed 2,470 body cameras, according to the de Blasio administration. Starting this January, the police department plans to issue roughly 800 cameras each month, increasing to 1,000 to 2,000 per month beginning in March.

NYPD also requires information technology infrastructure upgrades in facilities to make sure there is a smooth rollout, which would allow for body cameras to be charged in police facilities and extra internet bandwidth to support faster video footage uploads.

Earlier this month, the Patrolmen’s Benevolent Association sued de Blasio, looking to stop the NYPD from releasing footage from the cameras. The union claimed the release of such footage flouts state civil rights law.

De Blasio and O’Neill were quick to dismiss the lawsuit’s premise.

“We disagree,” they both said, one after the other.

“Thousands of cameras equals thousands of pairs of eyes on the street and therefore an even safer and fairer city,” Johnson said.

Brooklyn Borough President Eric Adams, a former cop, insisted the cameras do not hurt police officers and that it will save the city “millions of dollars.”

“What happened in Staten Island clearly showed us something was wrong,” Adams said, referring to Eric Garner, a Staten Island man who was killed in a police chokehold in 2014.

Queens Councilman Donovan Richards, chairman of the Council’s Committee on Public Safety, said the combination of body cameras, the Cure Violence program spearheaded by local leaders, and the neighborhood policing program will help reduce crime in the city.

“It is working, certainly,” Richards said. “Today is truly a real game changer in New York City policing, in particularly for black and brown communities who historically had mistrust with the department going back decades.”

Brooklyn Councilman Robert Cornegy, chairman of the Council’s Committee on Housing and Buildings, said the cameras are an “important step” in increasing police transparency.

He noted the fatal shooting of Officers Wenjian Liu and Rafael Ramos as they sat in their patrol car in Brooklyn in December 2014—which occurred in his district—was a “low point” in the area.

“The police and civilians alike have come together in a profound way since that day,” Cornegy said.

But Communities United for Police Reform was not enthusiastic about the announcement, arguing that capturing police brutality on camera “means nothing” if the NYPD refuses to hold officers accountable.

They referred to the continued employment of police officer Daniel Pantaleo, the white officer who killed Garner.

“Studies have shown that BWCs have not delivered those results, and the NYPD’s policies on the cameras, lack of discipline for police misconduct, and refusing to release basic information about the status of police brutality cases undermine any stated goals related to police accountability and transparency,” Griffith continued. 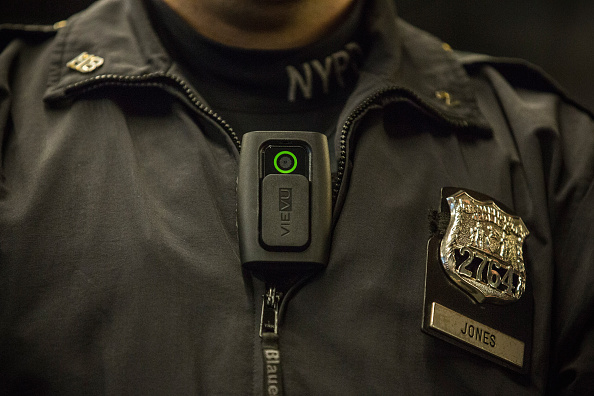