This weekend, it’s the U.S. versus Russia in an election in the small East European country of the Czech Republic. The contest is another battleground in this new Cold War, where conflicts are waged not in armies and walls, but on social media, in propaganda, and especially in votes. And unlike the static borders of NATO and Warsaw Pact countries of the old Cold War, the battle lines seem to move with each ballot box.

From Communism to Capitalism and Civil Liberties

As the concrete and rebar came crumbling down on the Berlin Wall, old Communist regimes also crumpled throughout East Europe. The country of Czechoslovakia was no different, as the peaceful Velvet Revolution ousted the repressive regime of Gustav Husak and his ineffective successor Milos Jakes. The new leader, former imprisoned playwright Vaclav Havel, became an international sensation, the symbol of a new era of East European freedom.

Even as it split from Slovakia (a peaceful separation that became known as “The Velvet Divorce”), the Czech Republic became a key U.S. ally, joining the North Atlantic Treaty Organization (NATO) in the 1990s and entering the European Union in 2004. Many thought the country would be more like its western neighbors, having banished its legacy of being a conquered in World War II and a Communist lackey, embracing free markets and free elections.

It’s hard to pinpoint where things began to unravel in the Czech Republic, which is at risk of sliding back into its old authoritarian ways. Could it be the autocratic tendencies of Havel’s successor, Vaclav Klaus? Seen as an ally, the West did little to press him for a more democratic style of governance. As a result, his successors learned the wrong lesson, that illiberal behavior would be tolerated by North America and Western Europe.

In fact, America and the European Union generally turned their attention away from East Europe. Concerns about terrorism from the Middle East in the 2000s made countries like the Czech Republic less interesting in terms of foreign policy.

By the end of the decade, the Czech Republic began to suffer the same “3 R’s” as everyone else in Europe: recession, Russia and refugees. The “Great Recession” of 2007-2008 battered every European country, undermining faith in the free market economics of the West. No longer did America and the EU look like the model to be followed in the Czech Republic.

Into the void stepped Russian President Vladimir Putin. Having replaced the aging alcoholic President Boris Yeltsin, the ex-KGB agent sought the twin strategies of consolidating his authority and rebuilding Russia into a military and energy powerhouse. Pro-Putin propaganda, absorbed by American and European press, portrayed Russia as a superpower, instead of its reality as a “Potemkin Village,” the fake façade of thriving villages used by Czars to show the country was doing better than it really was.

Finally, there were the Syrian refugees, who fled the Middle East and arrived in Eastern Europe. EU policy was to accept and integrate these foreigners, which didn’t sit well in a country where nationalism matters because such an identity has historically been under siege for much of the region. Putin’s anti-terrorism talk helped woo the Czechs, as many Europeans believed that refugees would possibly become Muslim radicals.

The Emergence of a Pro-Putin President

Thanks to recession, Russia and refugees, the Czech Republic turned to Milos Zeman, a former prime minister (1998-2002) and Social Democrat leader, in 2013. But like many ex-Communists and former Socialists, Zeman rebranded himself as a populist nationalist, a new way of playing to the crowd.

Zeman is strongly pro-Putin and advocates eliminating sanctions on Russia. He is also building a “strategic relationship” with Communist China, and has blamed the EU and Western economics for the recession, leading pundits to label him a “Euroskeptic.” And he rode opposition to Middle Eastern refugees to his first victory as the country’s president.

Normally, the Czech presidency wouldn’t mean much. The office has some symbolic functions and appointment powers but little else. Yet that leadership perception counts for much in this country. And we’ve seen in places like Turkey how a “ceremonial president” like Recep Tayyip Erdogan can turn a figurehead position into a dictatorship. Waving a rifle at journalists he dislikes might foreshadow how things would look if Zeman was leader for life.

And Putin has gone all out to ensure that his Czech ally remains in power. Pro-Russian propaganda and “fake news” has flowed from Moscow to Prague, seeking to sway the election and give Zeman another five years to consolidate his authority and party power to become as solid an ally as any Warsaw Pact Communist country during the Cold War.

Could This Election Be a “Czech” on Putin’s Power?

But there are some who would resist this move by Zeman to bring the Czech Republic into the Russian orbit and have cried foul about meddling from their powerful neighbor to the East. Though Zeman is leading the polls, he has a narrow 47.6-44.9 percent edge over Jiri Drahos, who used to lead the Czech Academy of Sciences.

Drahos is an American dream for the leadership, one who supports the American Dream. He wants the Czech Republic to remain firmly with NATO and EU—and not to befriend Russia and China, as Zeman has done.

And Drahos is not the only candidate running against Zeman. There’s also Mirek Topolanek, a former prime minister from the right who seems to be trying to emulate Donald Trump. Topolanek was critical of Barack Obama’s and the EU’s policies, but only to be more strongly pro-business, it seems. And he wants a missile defense system so that the Czech Republic can defend itself from Russia and perhaps the Middle East, which Obama was wary of allowing. And who knows what wild card role businessman Michal Horacek might play in this weekend’s election.

There could be more at stake in the country than just the presidency. With the anti-establishment ANO 2011 party unable to create a majority (they only took 78 of 200 seats in the 2017 election), a new legislative election could emerge after the presidential battle, allowing the pro-USA/EU faction an opportunity, or a similar chance for Putin’s allies in the Czech Republic to solidify their control and create another Russian satellite, just like during the Cold War. 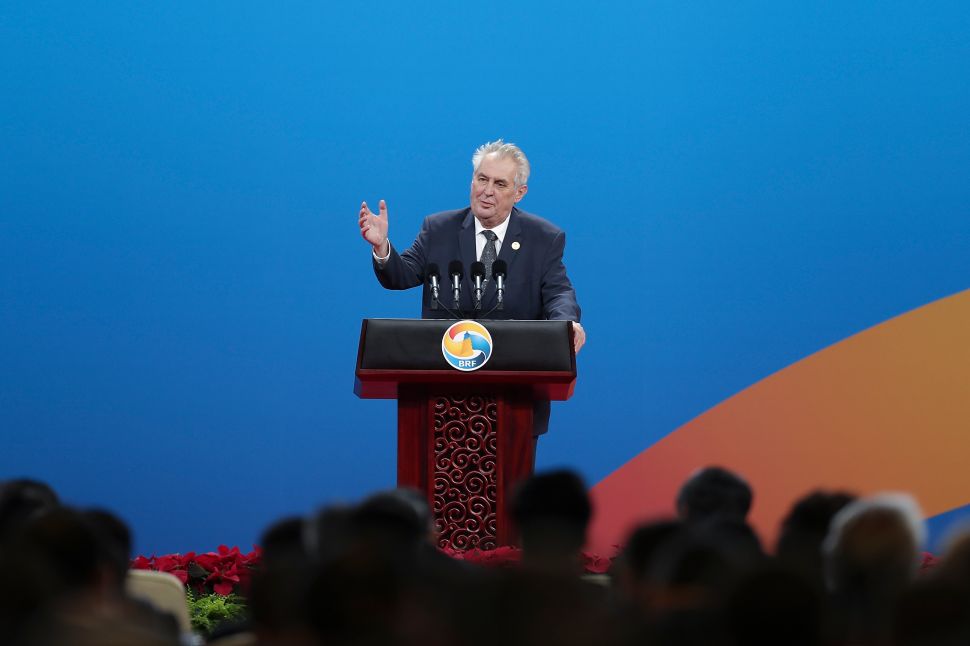