A panel convened by Gov. Andrew Cuomo last year has proposed charging drivers $11.52 in the most traffic-heavy parts of Manhattan, which would make New York City the first city in the United States to implement a congestion pricing system.

In a report released on Friday, the 16-member panel—dubbed Fix New York City—has proposed a one-way pricing zone E-ZPass charge of $11.52 for passenger vehicles once a day, Monday through Friday, between 6 a.m. and 8 p.m. within Manhattan’s central business district. That district is bounded by 60th Street on the north and Battery Park on the south, the Hudson River on the west and the East River on the east.

Buses, taxis, for-hire vehicles and drivers using the FDR Drive from the Brooklyn Bridge to 60th Street would be exempt from the zone charge.

Cuomo formed the panel in October and directed it to come up with strategies for tackling traffic congestion problems in the district and to identify revenue sources to help fix the city’s struggling subway system.

“This is a smart, comprehensive plan to address the challenges in New York, while taking into account the interests and needs of all New Yorkers,” Sam Schwartz, CEO of Sam Schwartz Engineering, a congestion pricing advocate and a former city traffic commissioner, said.

He also touted a subway action plan unveiled by MTA Chairman Joe Lhota in July, arguing it is “already producing positive results.” Lhota proposed that the city and the state split the $845 billion cost of fixing the city’s subway system. Cuomo committed to his half in his recently unveiled fiscal year 2019 executive budget, but Mayor Bill de Blasio said there is already money available in the state budget.

“A fully funded subway action plan is what we need and we’ll find a way to do it,” Schwartz continued.

Still, Schwartz noted Cuomo has yet to review the panel’s recommendations.

“None of us has talked with the governor about this report… the way this worked is we get the report, give it to him and the legislature, and we’re urging him to support it,” he added.

In a statement released following the panel’s conference call, Cuomo said he received the report and plans to “review it carefully” and discuss the alternatives with the legislature over the next several months.

“The report accurately points out that the objective is not to raise tolls entering the borough of Manhattan, but more specifically those trips adding to the congestion in a defined central business district,” he said. “But, as a born and raised Queens boy, I have outer borough blood in my veins, and it is my priority that we keep costs down for hard-working New Yorkers, and encourage use of mass transit. We must also find a way to reduce the costs for outer borough bridges in any plan ultimately passed.”

In the report released on Friday, the 16-member panel recommends a first phase that kicks off investments to improve transit connectivity between the central business district and the outer boroughs and suburbs and calls for more NYPD enforcement of existing traffic laws.

The next phase suggests a surcharge on taxi and for-hire vehicle trips in the district at the end of a 10-month period to enable transportation service companies to install the appropriate GPS technology in all vehicles. And the final phase includes the installation of a zone pricing program—starting with trucks and then for all vehicles—entering the district below 60th Street.

The panel recommends evaluation of the congestion reduction program’s metrics twice a year, which would be published in a report that evaluates the effectiveness of the surcharge and zone pricing programs.

Other members of the panel said the recommendations are the best way forward.

“For 14 years, I proudly represented the Bronx as borough president, and I’m proud that this report really addresses the needs of the boroughs outside of Manhattan… a critical change that’s desperately needed and one, however, that’s going to have to be done thoughtfully and gradually,” former Bronx Borough President Fernando Ferrer, the MTA vice chairman, said.

He urged Cuomo and the state legislature to follow the panel’s recommended phase schedule. And he dismissed critics of a congestion pricing plan, insisting the funding would not be diverted from the MTA.

Kathy Wylde, president and CEO of Partnership for New York, made a similar assessment.

“This distinguishes it from the effort that was made in 2006, 2007, where we didn’t have the dual partnership with the MTA, and I think that is a very important distinction because the two prongs [are] getting the resources for the MTA and reducing traffic congestion to reduce the costs and to restore productivity to the central business district,” Wylde said.

When asked about lack of city government representation on the panel, she noted that there are a number of members who represent New York City interests.

“It’s an independent group taking a look at these issues,” Wylde continued.

On Friday morning, de Blasio told WNYC’s Brian Lehrer that he has not received the formal plan and that he needs to “know a lot more.”

He said the plan shows improvement over previous plans given that taking bridges “out of the equation” creates fairness for Brooklyn and Queens. But he said that unlike his proposed millionaires tax on the wealthiest New Yorkers to fund subway repairs and reduced fares for low-income New Yorkers, the congestion pricing proposal does not include fair fares. He also said the plan does not include a guarantee that funds for the MTA will be diverted for other purposes.

“A lockbox guarantee that the money would go to our subways and buses in New York City is a major fundamental matter,” the mayor said, when asked what would make him back the proposal. “Obviously, I wanna see the fair fares question addressed, which my millionaires tax addresses… and there’s still equity issues that have to be addressed here, too… when there’s hardship cases, people having to get to medical care and other needs.” 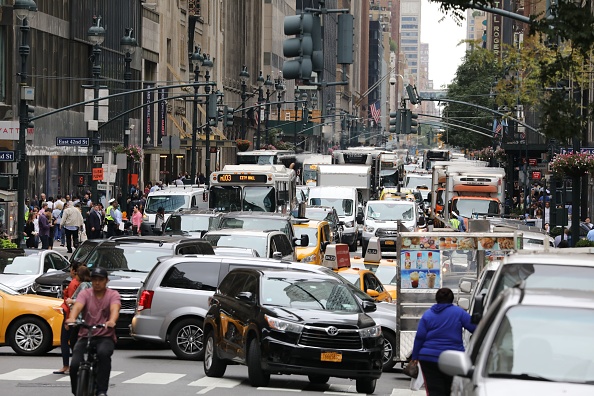