Apple wants to prove that girls run the world—with help from Malala Yousafzai.

Last night, the tech powerhouse announced that it was partnering with the Malala Fund, which is run by the Pakistani girls’ education activist. With Apple’s support, the fund will be able to scale up its efforts, doubling the number of grants it awards and adding programs in India and Latin America to support secondary education for more than 100,000 girls.

According to a press release, Apple will also provide technology to the Malala Fund and research policy changes needed to help young women succeed. As part of this initiative, Apple CEO Tim Cook will join the Malala Fund’s leadership council.

The exact amount of Apple’s donation was not specified.

“My dream is for every girl to choose her own future,” Yousafzai said in the release. “I am grateful that Apple knows the value of investing in girls and is joining Malala Fund in the fight to ensure all girls can learn and lead without fear.”

“We believe that education is a great equalizing force, and we share Malala Fund’s commitment to give every girl an opportunity to go to school,” Cook added. “We are honored to help [Yousafzai] extend the important work she is doing to empower girls around the world.”

Cook and Yousafzai met last year at Oxford University, where the activist is currently studying. They finalized the partnership in Beirut last week, according to Business Insider.

Yousafzai, the youngest Nobel Prize winner ever, co-founded the Malala Fund with her father in 2013 after being shot in the head by a Taliban gunman for the “crime” of going to school. The fund currently supports girls’ education programs in Afghanistan, Pakistan, Lebanon, Turkey and Nigeria.

Yousafzai will continue her crusade for girls’ education when she speaks at the World Economic Forum in Davos, Switzerland on Thursday.

Apple is getting more serious about girls’ education at a time of increased calls for gender diversity in Silicon Valley. A 2016 government filing showed that 81 percent of Apple’s senior officials are men, while only 23 percent of its technical staff and 33 percent of its global workforce are women.

Apple did not respond to an Observer request for comment. 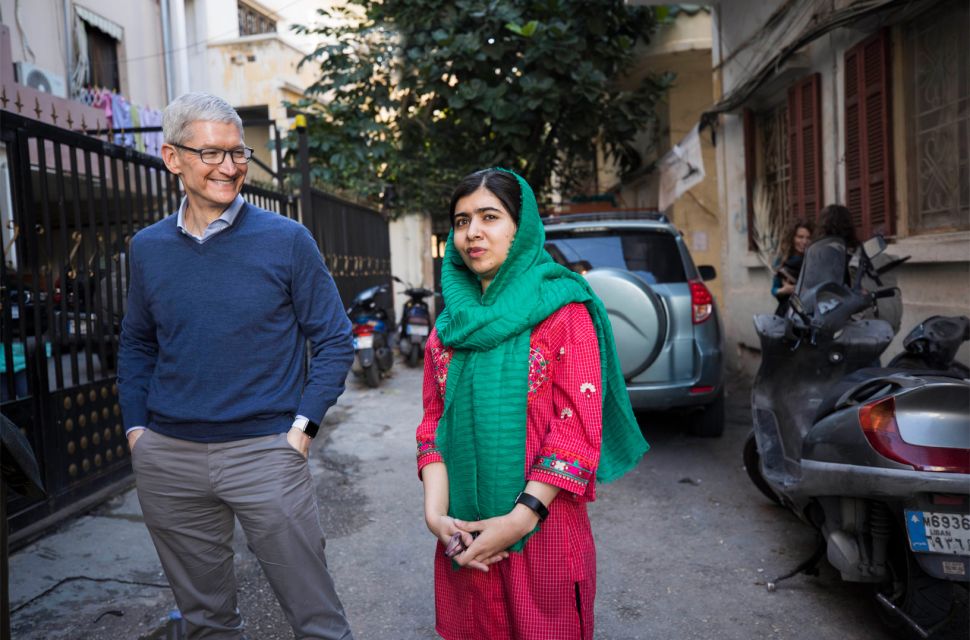