From the very first it may have been about former Maricopa County Sheriff Joe Arpaio. Back when Governor Sarah Palin suddenly rose out of the Alaska wilderness to excoriate the “Eastern Establishment” and send New York’s and Los Angeles’ late night pundits to the fainting couch. Back when Texas Governor Rick Perry stood at the steps of the Alamo and declared to a horde of anti-Obamacare rebels and Tenthers, “States rights, states rights, states rights!”

Suddenly, revolution was in the air. Futurist Gerry Celente declared it to be the awakening of the “Second American Revolution.”

And it seemed almost overnight that the states suddenly came to realize that they didn’t have to do what the federal government told them to do anymore. They could do whatever they liked, and it would be hard to stop them. Today it has even morphed into blue states like California declaring themselves to be a sanctuary state. And 15 liberal states are following California in regards to the Paris Climate Accords, ignoring Washington entirely.

“Not since the Civil War has anything like this happened,” wrote Celente in 2009.

Perhaps without Arpaio there will be no “Second American Revolution.”

He may not be among the best of public men but neither was John Brown.

When he announced his candidacy for Senator Jeff Flake’s Senate seat, Evan McMullin, a moral voice of mainstream conservatism marginalized today in Trump’s Washington, wrote in his newsletter, Stand Up Republic, “According to a report from the U.S. Department of Justice, Arpaio punished Spanish-speaking inmates for their inability to speak fluent English, routinely violated the 4th Amendment rights of detainees, and detained Latino drivers at up to nine times the rate of other drivers. He fails to meet even the most basic criteria for public service.”

But there is something else about him. Like Ho Chi Minh, Pancho Villa, Nathan Bedford Forrest and Che Guevara, he is a warrior true to his core beliefs—whatever they may be. And like so many warriors before him, he got in trouble with the law for his political beliefs. He “willfully violated an order from the court,” wrote U.S. District Judge Susan Bolton. It brought him the status of hero to the faithful, although he was quickly pardoned by President Trump.

It may even be safe to say at this point that Arpaio is a revolutionary and that we are just rising today to Celente’s “Second American Revolution.” His race to the Senate will tell us. If he wins the race, he will get the heroes welcome.

He may not. But the timing may be right for him if there is to be a rebellion. For it will not begin with Steve Bannon. He is, or was, a visionary, and more able than he has now been set up to appear. He was right about China, for instance, and other writers like former Senator from Virginia and former Secretary of the Navy Jim Webb and former Supreme Allied Commander Europe for NATO Wesley Clark have been calling the warning for a decade.

Michael Wolff’s book, Fire and Fury, has taken Bannon out of the picture while Trump, the intended target, still stands. And Trump today increasingly moves himself into the mainstream, proving himself to be “normal” and mentally intact to the cameras by televising a long staff meeting, which seemed staged in a Hollywood studio for that purpose, and deciding to go to Davos. But from day to day, there is no telling. This existential uncertainty is unprecedented in the annals of American history.

This is likely the real Trump; not a revolutionary, but one who plays angles and compulsively strives to find a place among the great women and men of his times. A complicated impresario from Queens still painfully striving for a seat at the best tables in Manhattan, still critically uncertain of his place in the world and unsure of his footing in it at age 71.

Trump’s lack of rebel chops was clear when he supported Judge Roy Moore’s Senate bid in Alabama only reluctantly and because he “needed the vote” in the Senate. However, he actually went to Alabama to save the mainstream and conventional Luther Strange, who was running against Moore.

Trump is clearly no more a revolutionary than Phil Robertson. And he is losing his soldiers in the press.

As The Wrap reports, Tucker Carlson, editor of the Daily Caller, all but called him a Swamp Thing, accusing Trump of giving away the farm on immigration and warning that the president was coming dangerously close to blowing the signature issue of his campaign.

“The president held a televised meeting with the very swamp creatures he once denounced. He told them he trusted them to craft immigration policy without his input. Then he suggested he’d be willing to accept any deal they produced, even a bad one,” said Carlson. “So what was the point of running for president?”

This is Arpaio’s issue, and in contrast it is clear to all that he will not compromise, will not deal, will not back down. Like so much in this chaotic administration, Trump’s staff meeting, conspicuously arranged for the cameras, unintentionally opened the gate for Arpaio.

Anyone who has never seen Arpaio on Carlson’s show or elsewhere may be surprised to find that Arpaio comports himself well. There is no reason why he should not be a competitive candidate. It may even be, as The Atlantic reports, that the Republican Party is “Joe Arpaio’s party now.”

And it may be that if there is no Joe Arpaio, there will be no revolution and it was all in with the dust and gone with the wind. But Joe Arpaio will not go away. He is only 85. And oddly enough, he could conceivably be joined in the Senate next year by former Massachusetts Governor Mitt Romney.

Generational historians like Steve Bannon’s favorite writer, Neil Howe, make the case that historic eras run from around 60 to 70 years and then come to a turning. We are at such a turning today, and Donald Trump is at the turnstyle. These two today, Arpaio and Romney, may well represent America at the crossing.

It could be their fate to meet together in the Senate in a match to tempt the world’s fate: The upright, sane, steady and honorable Mormon Romney, last man standing of the long, quickly-fading epic of the post-war West, and Sheriff Arpaio, a desert gunslinger with fire in the belly, pledging his time, fearless and alone, before the revolution. 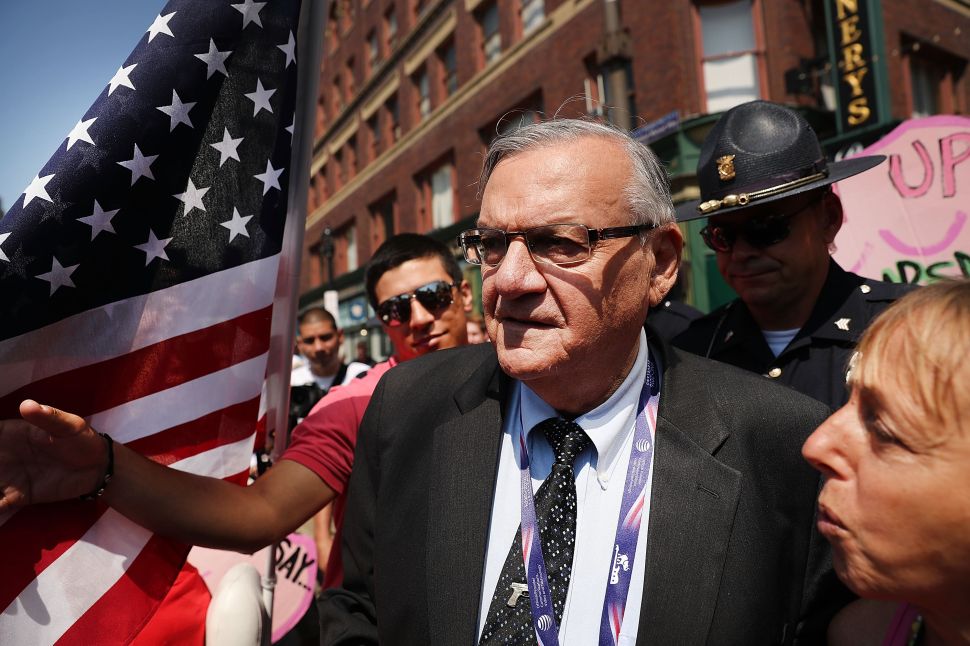