With the influx of massive wealth creation stemming from Silicon Valley, many young entrepreneurs and new money billionaires are following in the footsteps of Larry Ellison and Mark Zuckerberg in purchasing their neighbors’ homes—while continuing to prove that money is no object. They’re also teaching us all an important lesson: the only thing better than a friendly neighbor is no neighbor at all. This practice, it seems, is seeping into wealthy zip codes beyond those located in the tech-obsessed enclaves of Northern California, currently taking place in Manhattan, Malibu and beyond.

Two years ago, Daren Metropoulos, the co-owner of Hostess, ponied up $100 million to buy his next door neighbor’s fixer-upper, also known as The Playboy Mansion. However, the sale came with one major condition: Hugh Hefner was allowed to reside in the 20,000-square-foot mansion for the remainder of his days. The two happen to go way back, at least in terms of real estate transactions; in 2009 Metropoulos bought the property next to mansion from Hefner for $18 million. Now that Metropoulos combined the two neighboring lots, he owns one of the largest private estates in Bel Air, which has put him on the map as a major player in the real estate game. Following the passing of Hefner this past September, rumor has it that Metropoulos is planning on demolishing the home and combining the lots to enlarge his existing mega estate.

In 2013, Mark Zuckerberg spent more than $30 million to purchase four neighboring properties surrounding his Palo Alto residence. The Zuck supposedly took action after he discovered an opportunistic developer had wanted to purchase one of the neighboring homes with the intent to enlarge the property and advertise it as being adjacent to the Facebook mogul’s home. This prompted Zuckerberg to purchase all four surrounding homes, ensuring he and his family had complete privacy for the foreseeable future. For Zuckerberg, the decision was likely less about ego and more about privacy and security, as well as avoiding opportunists who might seek to profiteer from his name.

Recently, Sean Parker of Napster fame (and the first president of Facebook), purchased both homes neighboring his $20 million Greenwich Village townhouse. Whether or not he intends to combine them into one gigantic mansion, or keep them for increased privacy, is unknown. Elsewhere in Manhattan, Russian billionaire Roman Abramovich spent approximately $78 million for three contiguous townhouses on East 75th Street. Despite permits being notoriously difficult to obtain, Abramovich somehow received approval to combine the separate homes into an 18,255-square-foot mansion with a pool, only to purchase a fourth property a few months later.

Meanwhile, on the opposite coast, non-billionaires are cashing in on the practice, too. Jimmy Kimmel is believed to have paid a little over $1 million for a tear-down property next to his $6 million contemporary home located behind the Chateau Marmont. And over the hill, Hollywood gossip columns reported that Toronto-born rapper and tabloid mainstay Drake acquired his neighbor’s home in Hidden Hills after they continuously complained about the noise. In fact, he prophesied about that very move in Future’s Where Ya At, when he rapped: “I’ll buy the neighbor’s house if they complain about the noise.” The nearly $3 million property is located next door to the sprawling, $7.7 million residence Drake purchased in 2012, proving money really can buy happiness—or at least the right to crank up the volume.

When did the trend first catch on? No one can say for certain, but business titan Larry Ellison got the memo many years ago. He currently owns 12 properties on the shores of Malibu’s Carbon Beach—often referred to as Billionaire’s Beach, for the obvious reasons—including neighborhood institutions Nobu Malibu, Nobu Ryokan (formerly known as Casa Malibu Inn) and Malibu Racquet Club. And his shopping spree hasn’t ended just yet. One of the most recent additions to his collection is a $48 million home designed by Getty Center architect Richard Meier, previously owned by Lisette Ackerberg, widow of real estate developer Norman Ackerberg. Sources claim that Ellison’s massive Malibu portfolio and his real estate decisions are actually affecting the market as a whole.

The bottom line? Guarded gates and manicured hedges may bring peace of mind, but when money is no object, you can’t put a price tag on the luxury of space and seclusion. As Silicon Valley entrepreneurs become household names and inventory in historic neighborhoods like Zuckerberg’s hood of Palo Alto gets tighter by the day, tech titans and celebs alike are willing to dish out top dollar to ensure their neighbors are more than shouting distance away. 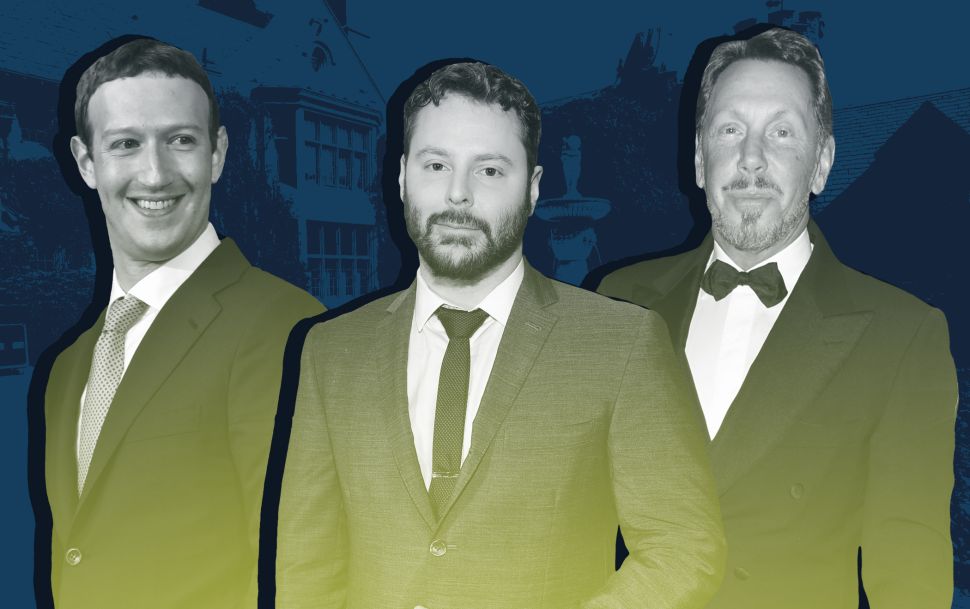