Oprah Winfrey gave a genuinely moving speech at the Golden Globe awards about the #MeToo movement. Now pundits are floating her name as a possible presidential candidate in 2020, and CNN reported that she is “actively thinking” about running. Is Oprah the right candidate to take on Donald Trump? Probably not. But whether it’s Oprah or someone else, Democrats are far better off with a non-traditional nominee than yet another career politician.

Trump won in 2016 in large part because he felt authentic. Even if some of his voters knew he was authentically awful, they felt they knew what they were getting. They made that same choice in 2008 when they chose Barack Obama over Hillary Clinton (while John McCain is certainly authentic, the Democratic nominee was bound to win after eight years of George W. Bush). They also made that choice in 2004 by choosing Bush over John Kerry and yet again in 2000 by choosing Bush over Al Gore. Voters have made themselves abundantly clear: Stop sending us career politicians who’ve been preparing to be president since the third grade. Given the stakes in 2020, Democrats can’t afford to make the mistake of not listening to them.

That’s why many of the names being floated as potential Democratic nominees for 2020 are alarming. Take Kirsten Gillibrand, for example. Like Oprah, she has been a true leader of the #MeToo movement. Her words and actions have been powerful and moving. But is she really that different from Hillary, Kerry or Gore? Like them, she’s a career politician (other than a few stints as a corporate lawyer at firms like Davis Polk and Boies Schiller, which doesn’t inspire confidence in anyone). Like them, she’s known for putting her finger in the wind to decide what her positions should be. She may be more appealing than the last few Democratic nominees (other than Obama), but she is still a variation of the same losing theme.

I read Michael Wolff’s book over the weekend, and while I enjoyed every word of it, I know better than to expect Trump to be booted out of office by impeachment or the 25th Amendment. Of course, I’d love to see either happen, but neither seem likely. And as much as I can’t conceive of Trump winning re-election, I couldn’t conceive of him winning last time either. Assuming we’re not in a ground war in 2020 and the economy remains strong, what incumbent president overseeing peace and prosperity ever loses? None. Trump is so idiosyncratic that the normal rules—good and bad—don’t apply, but Democrats still have to find a candidate who heeds the lessons of the last few elections and isn’t just a re-tread of what we already know doesn’t work.

If the definition of insanity is trying the same thing over and over again and expecting different results, nominating anyone who has spent the majority of their career running for office is insane. Democrats need to think differently this time.

The stakes are too high to follow conventional wisdom, even if that’s all party leaders, consultants, major donors, unions, and other interest groups know. Their comfort is not the goal. Victory—and salvation—is. That may not mean Oprah, but the reaction to her speech should tell us what voters want. It’s time to give it to them. 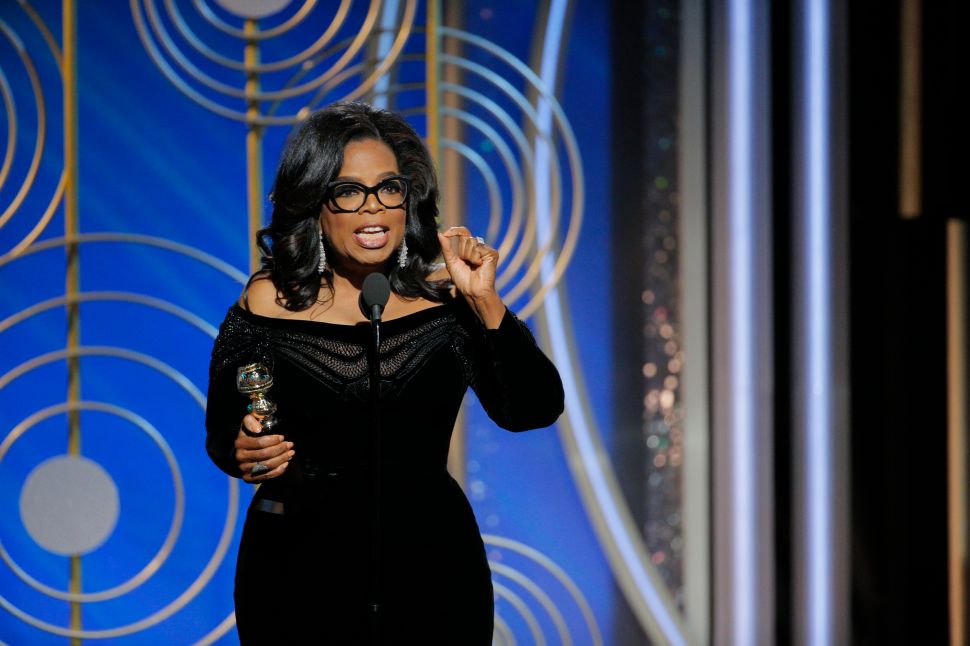