Carl Bernstein is windy with words but the breeze is clean and refreshing and it blows away the smoke.

As a guest of Brian Stelter on Reliable Sources on CNN Sunday, Bernstein gusted for as long as two minutes at a time about the investigation of President Donald Trump and his cronies by special counsel Robert Mueller.

Bernstein also spoke of the pretend journalists at Fox News Channel who protect the amateur president and distract the right-wing audience from the truth.

Rather than mock Fox and poke fun at its obvious obfuscations and false framing, Bernstein focused on the sinister ability of the right-wing propaganda factory to sway a committed base of supporters with a convincing version of alternate reality.

“Fox is hugely important,” Bernstein told Stelter. “It is a political force in this country such as we’ve never seen in the last 40 years, maybe the dominant political force in many ways of changing our politics. We should not minimize them.”

Acknowledging the force of Fox is like admitting the destructive power of a hurricane. You might not like that weather, but you’ve got to deal with it. While some may find Fox’s skillful distortion of facts and truth to be laughable journalism, Bernstein sees a serious purpose.

He called the current political climate a “Cold Civil War” and called Fox staff “the shock troops” of one side.

“We need to look, as we do, at what their agenda is, which has nothing to do with the news,” Bernstein said. “And, yet, there are some good reporters over at Fox… They will tell you this investigation is serious business.”

The Mueller probe is closing in on Trump’s inner circle, including some family members and top aides in his campaign of 2016 and in his White House since January 20, 2017. In recent weeks, Fox hosts—particularly Sean Hannity in the middle of prime time—have portrayed Mueller as corrupt and biased against Trump.

Hannity and his prime-time flankers—Tucker Carlson and Laura Ingraham—say Mueller leads a rogue cabal of the FBI aligned with the Democratic Party and the major news media to lead a coup against Trump.

Therefore, the Fox agenda is to attack Mueller’s objectivity and credibility to delegitimize his final findings as what Fox and Trump call “fake news.”

Bernstein knows about real news. In the early 1970s, Bernstein and Bob Woodward of the Washington Post led the reporting of the Watergate scandal that ended the presidency of Richard M. Nixon in 1974.

There are differences between then and now. Republicans have a stranglehold on Congress now but didn’t then. Republican power brokers have a major TV network now to distract from the presidential scandal.

Unlike Watergate, three current congressional committees have dragged their feet and created sideshows.

For instance, House Intelligence Committee Chairman Devin Nunes of California—Trump’s top tool on the Hill—recently cherry-picked intelligence information to concoct a “secret memo.” It claims the real scandal is how the Justice Department under President Obama got FISA clearance to investigate the Trump gang.

Hannity, Carlson, Ingraham and other Fox disinformers have helped Nunes and other right-wing fire-breathers frame the debate as:

On Stelter’s screen, the banner headline said, “Conspiratorial Feedback Loop Between Fox, GOP and Trump.” Bernstein said Republican leaders need to stand up and say, “Mr. President, you’ve got to stop demeaning and undermining this investigation.”

Although Trump seems to trust what he sees and hears when he binge-watches Fox, Bernstein suggested Sunday that Trump’s top aides are not fooling themselves about the seriousness of Mueller’s investigation of Trump’s associates and his family.

Much of the coverage in recent days flowed from a New York Times report that Trump wanted to fire Mueller last spring but backed down when White House counsel Don McGahn vowed to quit.

Trump foes say it shows a pattern of Trump obstructing justice. Trump defenders say he has the right to fire Mueller and he didn’t, so what’s the big deal?

Like many weekend shows, Stelter used the video of Hannity double-talking his way around the story when it broke Thursday night and everyone but Fox covered it seriously. To be fair, in other breaking news that night, Carlson learned that immigrants are bad and Ingraham learned that God is good.

Bernstein wondered aloud if Trump might try “whipping the country up” if he feels cornered.

“He’s certainly the kind of person that thinks he might be able to,” he said.

Indeed, Trump has hard-core support that includes folks who phone in death threats to CNN and those who march with torches for Confederate statues and oh-so-many others in so many red states who attend large rallies to chant and cheer menacingly to support a 71-year-old, orange-faced, yellow-haired demagogue-in-chief who—15 months ago, according to the conservative Wall Street Journal—paid a sex film actress $130,000 to keep quiet about their tender romance right after Trump’s third wife gave birth to an heir.

“Follow the money,” Bernstein said. “Follow the lies. This investigation has reached a point of real peril for the President of the United States.” 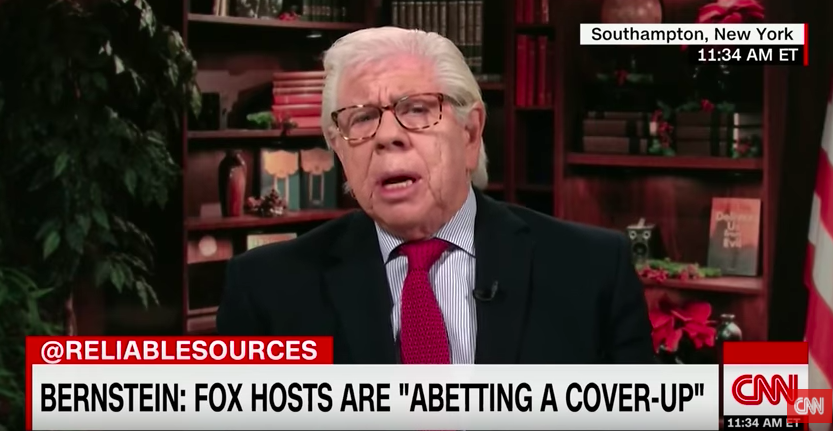