Craig Kauffman helped put Los Angeles on the art world map in the 1950s and ’60s with his bright and punchy plastic wall-mounted sculptures. Despite his long-standing association with California’s so-called “cool school” of the time—which counted other now-major artists like Robert Irwin, Ed Moses and Billy Al Bengston among its crew—Kauffman had numerous personal and professional ties to New York and beyond where minimalism was creating a sea change in modern art.

“Many of the history books want to posit Kauffman as a regional artist,” art historian and Kauffman scholar Frank Lloyd told Observer. The artist’s involvement with L.A.’s infamous Ferus Gallery—which helped launch Andy Warhol’s Pop art career—in the 1950s and his influence on significant artists of the Light and Space movement of the late 1960s and early ’70s make it easy to package the artist simply as one of the SoCal bros. From 1966 to ’71, however, Kauffman took to incorporating industrial materials in his work, like his signature use of polished plexiglass to make candy-colored shapes, marking a significant shift away from his earlier abstract canvases. “These works have little to do with the Southern California scene then, they were created in direct response to an international, intellectual art movement,” Lloyd explained.

This unique moment in Kauffman’s career correlates with the artist’s introduction to New York in 1965 when he had his first show with Pace Gallery, through which he began to show with the men driving minimalism, Donald Judd and Robert Morris. It’s precisely this brief but significant creative exchange that’s explored in the exhibition “Crossroads: Kauffman, Judd, and Morris,” opening January 19 at Sprüth Magers in London.

The show marks the first time works by the trio have been shown together in Europe. Indeed, London audiences may well be better briefed for a show on a these three foundational figures in midcentury American art given that the city has played host to several major shows dedicated to myriad other American modernists over the past year, namely Robert Rauschenberg at Tate Modern and Jasper Johns at the Royal Academy of Art.

This was a time when so many artists, especially those trained in the tradition of painting, were experimenting with the limits of the medium and, according to Lloyd, Kauffman was no exception. “He started integrating plexiglass and industrial materials into his work around the same time Judd did,” he said, noting that during that period Morris and Kauffman—who had already met in San Francisco in the 1950s—were both increasingly interested in the process of making work, rather than how the object looked upon completion.

Like Judd and Morris, Kauffman used plastic and other mass-produced materials to create objects that could sit on the ground, hang on a wall, or even be suspended from a ceiling, thus complicating their status as a painting or sculpture and playing with the viewer’s perception of space around it. This is perhaps best exemplified by Kauffman’s gradient acrylic works from the late 1960s that hang like clear bright textiles, casting colorful shadows on the wall and floor around it. These are juxtaposed with Morris’s 1968 Two Grey Felts, actual upright, twisted textiles that spill onto the floor, their monotonous darkness absorbing light rather than casting it, but nonetheless appearing to shift in form as one moves around it.

“There are certainly similarities in their use of materials,” Lloyd said, “but what really comes to the fore is their shared interest in how those materials make the artwork a perceptual object in its own right without needing to visually reference anything in the outside word. It stands alone as its own unique experience.”

This trio of artists shared more than just ideas within these five years, however. In 1970, Morris and Kauffman bought farmland in Upstate New York near New Paltz, where the former still lives. And Judd and Kauffman amicably swapped work with each other in the late 1960s. In fact, Judd kept his bright orange vacuum-formed, lozenge-shaped, wall-mounted plastic sculpture in his personal collection until his death. The work was sold off by the Judd Foundation in 2006, but it’s on view in “Crossroads” thanks to a generous lease by the current owner.

Judd and Morris continued to probe the experiential and environmental aspects of art, ultimately creating a minimalist philosophy that remains unshakably influential and borderline dogmatic. But, by 1971, Kauffman abandoned his use of industrial materials and shifted his focus back to painting, creating colorful geometric canvases of various shapes. “Kauffman wasn’t a theoretician, and the other two certainly saw themselves as such,” said Lloyd. “But that doesn’t mean he wasn’t part of the conversation.”

Had Kauffman continued down the road he was forging in tandem with Judd and Morris in the late ’60s, inevitably he would have moved into more immersive, environmental installations, not unlike his friend and fellow Southern California artist Robert Irwin did with his light and scrim works that encompass entire rooms. “I think ultimately he embraced his love of a solitary studio practice and realized he was much more invested in the history of painting than some of his peers,” said Lloyd.

Despite the divergence in their work, Kauffman’s experiments with Judd and Morris reveal a pivotal moment in modern art that determined the trajectory of their careers. “They may have each arrived at vastly different outcomes,” Lloyd explained, “But this was ultimately a moment that bridged between a number of distinct concerns in contemporary American sculpture at large.” 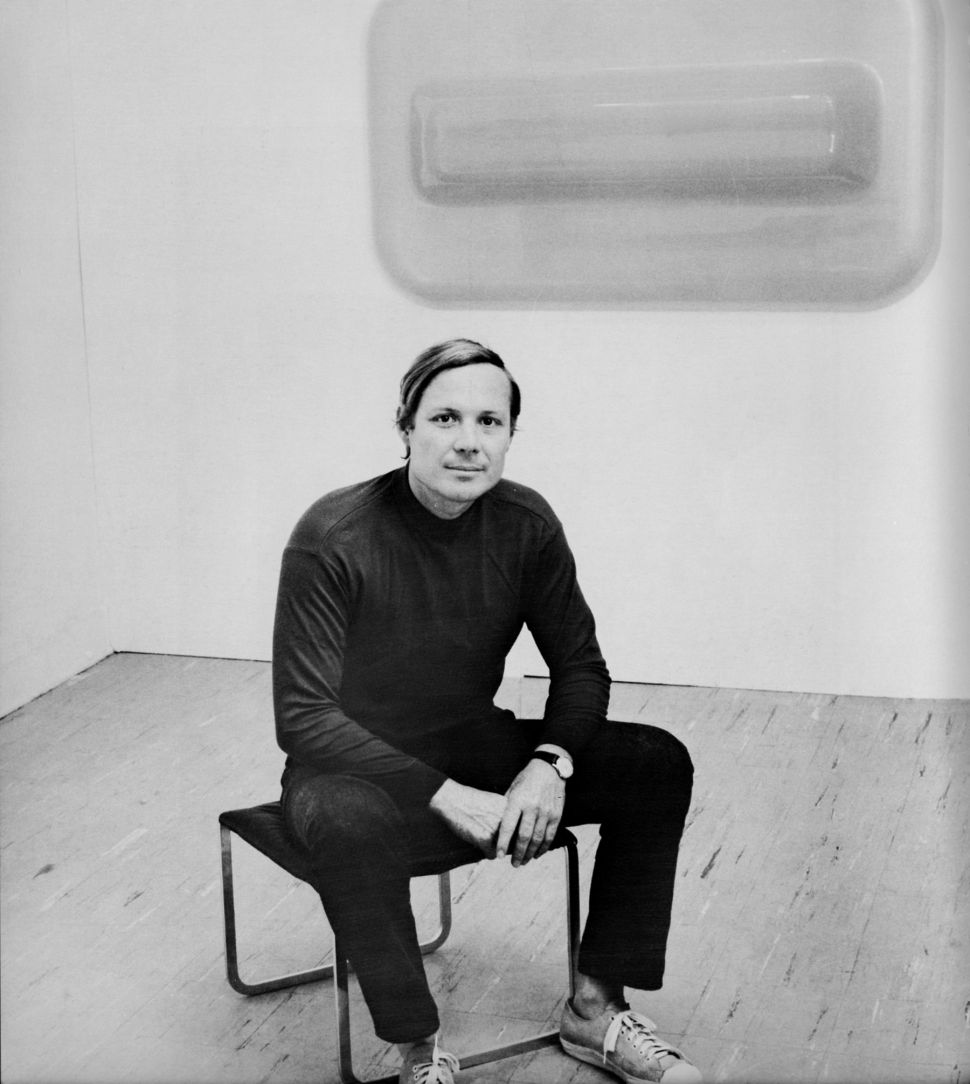