I went to the same high school that Stranger Things star David Harbour graduated from. That little tidbit makes for a solid story at parties and is my one claim to fame. Harbour’s claims are a bit more… impressive.

He’s been a working actor for almost 20 years and has a new Super Bowl commercial coming this weekend, he stars in Netflix’s biggest show and he’ll also be headlining his own superhero franchise come this time next year. But legacy and fame aren’t exactly squatters in his headspace at the moment, he’s just happy he can “pay my rent doing what I do.”

Harbour was 41 when Stranger Things hooked us like a drug in summer 2016, a late stage to be getting your biggest mainstream break. It wasn’t as if he was toiling away in a cliched vortex of failed auditions until then—he was nominated for a Tony in 2005—but it’s fair to say he was more of a “that guy” than a household name.

Coming from an affluent suburban bubble, it couldn’t have been easy to see former high school classmates join law firms and Fortune 500 companies, while he was still making single episode guest appearances, no matter how big of a Law & Order fan one might be.

But surprisingly, Harbour sees his slow and steady climb up the Hollywood ranks as his greatest professional and personal asset, a rare grounding experience in an industry drowning in hollow scripts, CGI-infused chaos and fake smiles.

“It’s great,” he said of breaking into the game later in life. “I highly recommend it. Sarah Paulson once said, ‘Don’t be successful early.’ I don’t take it that seriously, you know, because it’s so fickle. I don’t associate success with happiness, and I don’t take it to heart like, ‘Oh, I’m so special.’ The 20 years I’ve been working in this business has allowed me to make mistakes and hone my skills. I’m not acting for you to like me, I just want to express something that hopefully moves you.”

“The perils of success at a young age is being afraid to make a mistake,” he added.

And the benefit of age is wisdom. Harbour is an artist whose goal it is to “create a fun and compassionate society” influenced by his entertainment. But he’s also not blind to the realities of the industry.

Over the last two decades, Hollywood has moved away from the holistic approach of making films for everyone—mid-budget, star-driven genre fare, adult-skewing dramas, etc.—and adopted a model centered around repetitive cash flow (i.e. sequels). With the decline in home entertainment revenue and the rise of streamers and television quality over the last 10 years, the major Hollywood studios have doubled down on that strategy, elevating branded entertainment and IP titles above all else and rolling back production on anything that can’t be franchised.

Right around the new millennium, the major studios were releasing 200-plus films a year combined. Now, that number has shrunk to around 150.

So, when Lionsgate came calling about a reboot of Hellboy, the popular superhero comics property that Guillermo del Toro spun into a successful two-film franchise in the mid-2000s, Harbour listened.

Rather than resort to the tried and true PR-tested regurgitations, Harbour admitted that the commercial aspects of headling his own superhero franchise played into his decision-making. As he explained it to me, paraphrasing a Julius Erving quote, if you want to change the game, you have to get off the bench.

“The mythos of superheroes is our mythos today,” he said. “They are American myths. Captain America, Iron Man, Hulk, these are the biggest movies in the world. But sometimes superhero movies can be a little bit thin… I want to be part of the dialogue. I like the grand stage, I like talking to younger people, and I want my artistry to be seen by people.”

“I love the material, I love Hellboy,” Harbour continued. “I want to be part of this discussion and help turn superhero movies into more of what I grew up with in the ’70s and ’80s when it felt like movies had a little more magic to them. Part of this move is to see what I can do with it. How can I make an impact?”

It’s kind of incredible that Harbour, who is set to appear in a new Tide commercial that feels like a “little indie movie” and will air for 100 million people during the Super Bowl (“no pressure,” he joked), has even reached this point in his career.

Short of Harrison Ford, the list of leading actors who successfully hit it big after 35 is a short one. But through a variety of roles in interesting projects and a steady on-screen presence, Harbour is finally poised for his coming out party as a movie star and the start of his chance to make an impact.

How did it happen? How did a seemingly kind guy raised in a wonderful area and who makes people’s dreams come true on Twitter manage to transform himself into a dark and hardened superhero or a corrupt Fed or a broken small-town police chief seeking redemption?

“I think that a lot of it is internal work, and so the feelings I have throughout my life—growing up in Westchester, wanting this larger experience, feeling like an outcast—informs my characters and a lot of what I do… A lot of the characters I gravitate towards feel like outsiders,” he explained.

“F. Scott Fitzgerald said everyone has one story to tell. But I think we all may have more than one.”

We’re looking forward to your next one, David. Plus, it makes my claim to fame all the cooler. 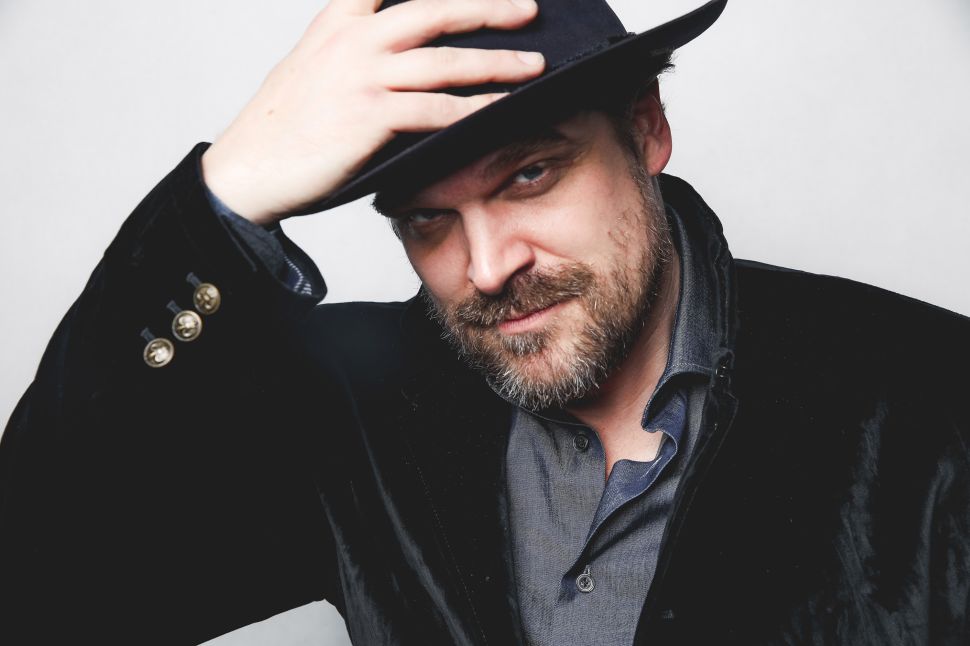