New York City Mayor Bill de Blasio’s administration is lashing out at Gov. Andrew Cuomo over language in the state budget that pressures the city to dole out more cash to fund its crippling subway system.

In his fiscal year 2019 budget address, Cuomo committed to his half of the $836 million short-term plan unveiled by MTA Chairman Joe Lhota in July to fix the subway system and called on the city to fund its half of the plan. De Blasio has maintained there is already money available in the state budget, pointing to $456 million in state aid he says has been diverted from the MTA since 2011.

Cuomo’s budget also states the city would have to pay for the capital needs of the New York City Transit Authority and includes a value capture provision which creates a special property tax district in the city to solicit property taxes to finance local transit projects.

“We are objecting strongly to language that was inserted into the budget that would both create a new capital liability—a new capital commitment liability on the part of the city for New York City Transit, which is breaking a long-standing history of how the MTA is funded,” First Deputy Mayor Dean Fuleihan told reporters during a conference call on Tuesday.

And he expressed concern about the value capture proposal, as well as the terms of the subway action plan.

“We certainly object to the arbitrary nature of the value capture proposal, which targets in a way that’s unprecedented for local governments, that targets specific projects in New York City and takes most of what they claim would be of value… determined without any local input by the MTA,” Fuleihan continued. “And, third, of course, our objection continuing to the way the action plan is funded, as well as more accountability that we want to see out of the MTA.”

Zachary Carter, the city’s corporation counsel, said Cuomo’s proposal for legislative action is a “tacit admission” the city has no legal obligation to make a capital contribution except for the $5 million capped by state legislation in 1953.

The only provision for funding since the original bill, he explained, was the authority the state legislature granted to the NYC Transit Authority to raise funds by issuing bonds.

“In the 65 years that has passed since the ’53 legislation, any contribution by the city has been voluntary and/or the subject of political negotiation between the city and the state,” Carter said. “There is no legal obligation on the part of the city to contribute more.”

The de Blasio administration also took issue with how the agency allocates its funding.

“The reason we gave is, at this point, again, as obviously the funding situation for the MTA is acute—we all agree on that—that taking in the aggregate what’s going to be nearly a billion dollars to spend on stations that are not… the highest priority in terms of ridership and where the city’s going to grow,” Polly Trottenberg, commissioner of the city’s Department of Transportation, said. “To not put accessibility elevators in any of those stations is not the best use of those precious funds at this point.”

Ahead of the conference call, de Blasio—who accused the MTA of creating “false blame” by driving up the number of power-related subway delays as revealed by the New York Daily News—told reporters the city sought to bring home the point that “we don’t like the direction the MTA is taking.”

He blasted the MTA for funding countdown clocks, Wi-Fi, painting and lights on bridges, arguing the money should be used to address the subway crisis.

“It should not go to amenities or things that are nice to have but less essential,” the mayor said.

In a statement, Lhota—who, along with MTA President Patrick Foye, held their own conference call on the issue—said the city is required to fund the capital needs of NYC Transit Authority under the law—a law, he noted, that goes back to 1953 and “was reiterated in 1981.”

The city, he argued, is fully protected because it has sole approval of the NYCTA Capital Plan above $5 million. He noted the state has committed $8.6 million to the capital program, as well as to its half of the action plan.

And he denied the mayor’s repeated claim that the state diverted $465 million in state aid, saying it went toward paying debt service to MTA bonds, directed capital assistance to the MTA and additional operating aid. He added that it included savings to the agency by removing capital projects “dictated by the [state] legislature but paid for anyway in MTA state funding.”

“We know the mayor has always been more comfortable with political rhetoric rather than governing, but his mistruths about the MTA and his disregard for the riders is growing,” Lhota said.

Lhota noted the value capture proposal is subject to the city’s approval and that Con Edison has done “extensive work” for months to upgrade the old electrical system in the subway without help from the city.

And he took a jab at the mayor’s proposed millionaires tax on wealthy New Yorkers to fund reduced fares for low-income New Yorkers and subway repairs, calling it a “nonstarter in the real world.” A panel formed by Cuomo unveiled its congestion pricing proposal last week.

“The city claims no financial responsibility for the subway system that it owns and polices and is the lifeblood of the city’s economy,” Lhota continued. “The mayor’s answer is simple—and he should just say it—he doesn’t want to fund the subways and help riders. So be it.” 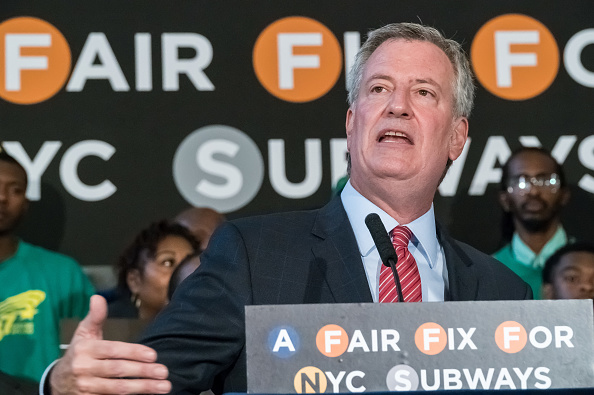