It has not been a good month for Democrats. The economic news is through the roof. Trump’s pro-business policies have had an immediate and profound effect. The unemployment numbers are the best in years. The stock market is booming.

The Republican tax cuts have yielded immediate benefits, as corporations are giving back in the form of higher wages, bonuses and expansion. We are in the midst of the Trump-boom.

Democrats have staked their credibility on the Steele dossier, something so far-fetched and clumsily worded that nobody could possibly believe it. It sounds like one of those Nigerian prince emails that anyone should know is laughably ridiculous.

It uses the awkward formulations of a Russian trying to pull off English, like “Speaking to a trusted compatriot” instead of “According to a reliable source.”

There are the other Borat-esque flourishes:

Trump gave the Obamas, “whom he hated,” the what-for by, “defiling the bed where they had stayed on one of their official trips to Russia by employing a number of prostitutes to perform a ‘golden showers’ urination show.”

Ahhh, the ol’ poorly conjugated golden showers urination show. Attributing to an American hotelier, no less, the old-world sensibility that a bed is defiled when errant sex acts are performed on it.

Trump probably read that part of the Dossier and thought, “That’s why our laundry detergents contain the maximum federal level of disinfectants at all Trump properties.”

Obviously, this is not the work of a sophisticated British spy. It is low-level Russian disinformation packaged and sold as actual intelligence to Hillary Clinton’s campaign for something like $12 million.

You can almost see the dossier’s real author in his worn sheepskin coat and ushanka-hat looking at his bag of loot saying, “Now I buy dacha on Black Sea and many nice thing for wife.”

The long-haul truckers who voted for Trump always knew this Russian collusion stuff was bunk, but in one of history’s greatest examples of confirmation bias, President Obama’s Harvard-trained intelligence community fell for it.

Within a few weeks, a memo will likely be released that shows not only did Democrats and their bright lights in the FBI and CIA believe the phony Russian kompromat that made its way into Democratic opposition research, they cited it to a federal judge as actual intelligence to get FISA wiretaps. If so, wow.

Either that or they didn’t believe it and just used it as an insurance policy to thwart Trump, which FBI text messages that Congress has been able to recover seem to suggest. That is even worse.

With their world crumbling, Democrats needed a distraction.

So they shut down the federal government. There is no way, if they were defeating Trump in the other thousand ways they are trying, they would have pulled that kind of stunt.

The Democrats were reduced to delaying Social Security checks, streamlining services at VA Hospitals, and suspending weapons maintenance contracts in the pitched battle against ISIS.

They tried to blame President Trump for the shutdown. Amazingly, CNN and The New York Times refused to play along. They ran pieces that attributed fault to the Democrats.

How could they not?

Back in 2013, Republicans filibustered a continuing budget resolution and shut down the federal government to gain concessions on Obamacare.

There were some, including a certain opinionated reality show host, who blamed the shutdown on President Obama.

But the arbiters of fair in the media rejected that position and set the strike zone: a shutdown is the fault of the legislators who stand in the way of a continuing budget resolution.

There was no toleration for—even hostility to—the “on the other hand President Obama is responsible for the shutdown for failing to make concessions on Obamacare” argument.

The media had no choice but to apply that standard this time or risk being excoriated in next year’s Fake News Awards.

And Democrats are going to need CNN, The New York Times, the Harvard faculty—pretty much all hands on deck—to extricate themselves from this hole.

They somehow must sell America on the idea that Obama’s 2009 trillion-dollar stimulus and eight years of anti-business policies are finally paying off with an economic boom; and that Trump’s deregulation and tax cuts have nothing to do with it.

Good luck. At some point, voters are going to stop believing the grainy voice on the camp loudspeaker repeating, “Trump is finished and will be impeached.”

Democrats can keep telling themselves they’ll win back Congress in November because look what happened in Alabama. But with a strong economy they won’t—unless Steve Bannon picks all the Republican candidates. 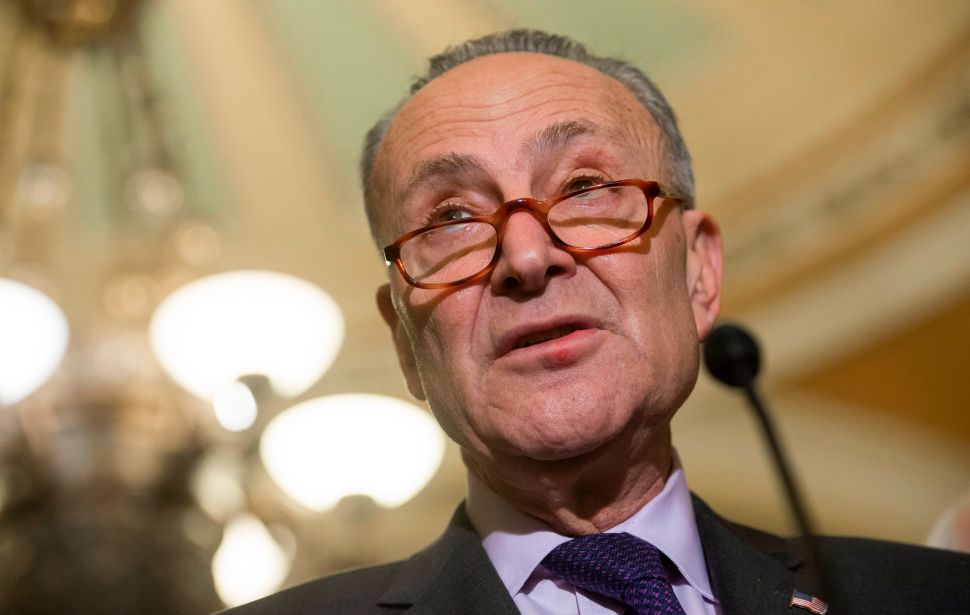