David A. Clarke, Jr. is vicious former cop with a mean mouth. Like President Donald Trump, Clarke often shoots from the lip on Fox News Channel. No wonder Clarke admires the amateur president so much while Trump loves him back.

Like Trump, Clarke also sends out incendiary Twitter messages. Some of them got Clarke suspended briefly this week because they broke a Twitter rule against making “specific threats of violence” or wishing for “serious physical harm, death or disease of an individual or group of people.”

Clarke wrote about the media.

“MAKE THEM TASTE THEIR OWN BLOOD,” Clark wrote. “Give them a taste of their own blood.”

The former Milwaukee County Sheriff returned to Twitter Tuesday after deleting his most offensive recent tweets.

But what about Trump, who—later Tuesday evening—responded to the nuclear bragging of North Korean leader Kim Jong Un with a “specific threat of violence” of his own.

“I too have a nuclear button,” Trump wrote, “but it is a much bigger & more powerful one, and my button works.”

Lawrence O’Donnell read the words Tuesday night on The Last Word on MSNBC.

“That,” O’Donnell added, “is exactly what diplomats and adults around the world consider insane.”

Indeed, it appeared as if the President of the United States had threatened on Twitter to use nuclear weapons in a way that could cause “serious physical harm, death or disease” to many people.

Perhaps Twitter users will petition the internet company Wednesday morning to suspend Trump’s tweeting privilege, just as they did with Clarke. Twitter at first was not going to ban Clarke until more Twitter users complained about Clarke’s posts like:

“Nothing like getting under the skin of lefties like I did today. I fight to win. You come at me libs you better bring a hard hat, some aspirin and your veggie wrap because it’s going to be a long day and I’m going to smack you around until you crawl back to your mom’s basement.”

And then Clarke wrote about poking the media “in the eye with a sharp stick,” as he so gently put it.

“Bitch slap these scum bags til they get it,” Clarke wrote.

You’ve probably seen Clarke from time to time even if you’re not a right-wing Fox nut.

He’s the black guy with the goatee, the stern face and the cowboy hat to keep the TV lights out of his hard, cold eyes, pardner. He’s Trump’s kind of cop, sort of like Joe Arpaio, the racist Arizona sheriff pardoned by Trump after a career devoted to profiling, persecuting and humiliating undocumented immigrants.

Under Clarke’s supervision, according to Newsweek’s reporting, four people died in one year in the Milwaukee County Jail. One was mentally ill and died of dehydration after being refused for seven days.

Clarke resigned from his job last summer about the time he was sued by a fellow airline passenger who charged that Clarke had him detained at the airport because the man—named Dan Black—shook his head at Clarke when they traveled on the same plane.

Deputies questioned and hassled Black when he got off the plane. Clarke was rumored to be up for a job in Trump’s administration in the Department of Homeland Security. Clarke said he turned it down; the administration never confirmed this.

But Trump sent out a tweet plugging Clarke’s book, Cop Under Fire: Moving Beyond Hashtags of Race, Crime and Politics for a Better America.” Trump—who brags about not reading books—called it “a great book by a great guy, highly recommended.”

Now that he is no longer a real cop, Clarke can’t appear on Hannity wearing his dress uniform decorated with ornaments like those of a Fifth Avenue Christmas window. He works for something called “America First Action,” a political action committee on the radical right-wing fringe.

Clarke showed up in Alabama last month to rally support for Roy Moore, the accused child molester and true Republican “conservative” who almost got elected to the U.S. Senate despite favoring the Ten Commandments over the U.S. Constitution.

It might not be too far-fetched to imagine Clarke back in line for another position in the Trump administration. Now that the reality TV star Omarosa has been booted after fighting with the National Association of Black Journalists and the Congressional Black Caucus, Trump no longer has any African-Americans at the White House, and Clarke is Trump’s kind of black guy.

Clarke said Black Lives Matter, which protests police violence, was conspiring to destroy the nation with what Clarke called “hateful ideology.” Of the “Dreamer” immigrants hoping for legal status in the U.S., Clarke said “many are straight up thugs.”

He said some black people sell drugs “because they’re uneducated, they’re lazy and they’re morally bankrupt.” Trump rewarded Clarke’s prejudices by letting him speak as a warm-up act at the Republican National Convention in 2016.

After Trump praised white supremacists last summer as “some very fine people” who demonstrated in Charlottesville, Va., Clarke tweeted that he was proud of Trump because he “didn’t take sides.” One woman protesting the neo-Nazis died when a right-winger ran her down with his car.

Clarke’s timing may be perfect.

He has just the sort of kick-ass, tough-guy demeanor that Trump tries so hard to fake. If Clarke doesn’t get a White House job, look for him to back right-wingers in the coming Congressional election. In the meantime, you can dial up his Twitter tantrums or catch his rancid act on Fox. 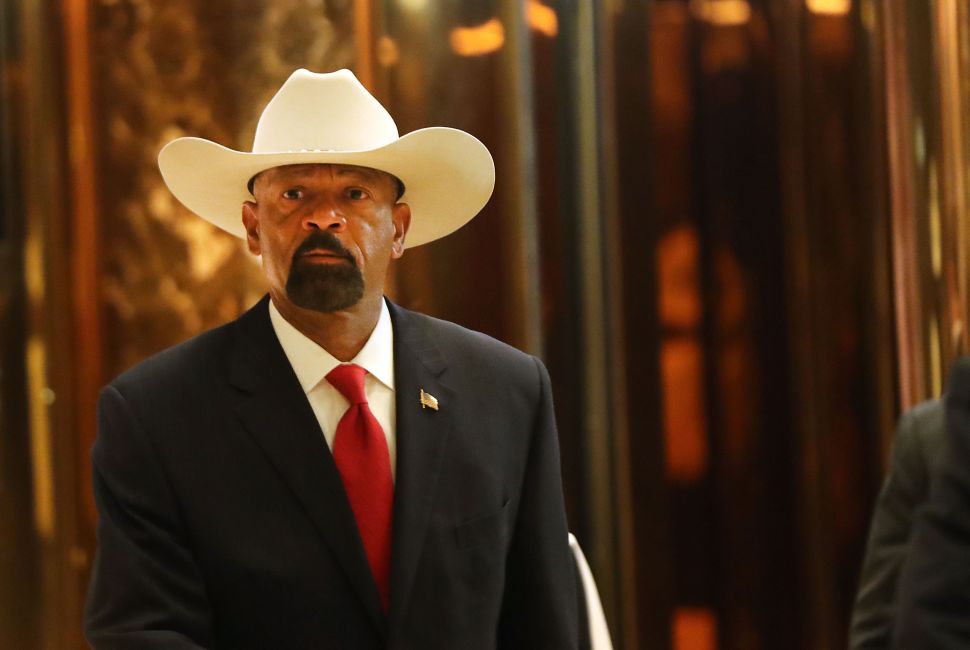