If you believe immigrants are the lifeblood of this country, as I do, you want the Dreamers to stay, you want more immigrants to come each year, and you hate the idea of the wall. The opposite is true if you believe that legal and illegal immigration is killing this country. Each view is strongly held by tens of millions of Americans. So let’s call it even, move past morality, and start answering the real question at stake for Democrats: Are they willing to pay $25 billion to build a wall to help keep future immigrants out in order to keep 1.8 million current immigrants in?

If you divide the number of immigrants allowed to stay under Trump’s immigration plan by $25 billion, Democrats are effectively paying Trump and the GOP a little under $14,000 per immigrant to allow them to stay. Is that a good deal or not?

According to the U.S. Census Bureau, New York State spends more than 1.5 times that (a little over $21,000) on each public school student every year. The results, as we all know, are not exactly world class. According to the federal Department of Health and Human Services, average health care spending in the U.S. is $10,345, a little less than the per immigrant saved cost of the wall. According to the AARP, the cost of a room in a private nursing home averages close to $100,000 per year. Keeping one senior citizen in a nursing home for a decade is roughly equal to keeping 71 Dreamers here for life.

So is it worth spending $25 billion to allow 1.8 million immigrants—all of whom were brought here as children—to stay in this country? If they produce more than a $14,000 net benefit in economic gain to the U.S. over the course of their lives, then yes, it is.

Trump likes to paint a picture of immigrants as people who impose great costs on society, who suck up a vast amount of social services and public safety funding. But that idea simply doesn’t square with the facts. According to the left-wing Center For American Progress, deporting the Dreamers would reduce GDP by $433.4 billion over a decade. And according to the right-wing CATO Institute, Dreamers have a lower incarceration rate than native-born Americans (.98 percent compared to 1.12 percent). In other words, Dreamers have a positive economic impact on society, and if anything, impose fewer societal costs than people who are born here.

The federal government wastes billions of dollars on unnecessary things—like bridges to nowhere and $700 toilet seats—all the time. According to the Watson Institute for International Studies at Brown University, the Iraq War, which has accomplished nothing, cost taxpayers $2 trillion. Twenty-five billion is a little more than 1 percent of that amount.

And the wall itself, while likely yet another example of money being flushed right down those $700 toilet seats, will create some jobs and economic benefits. Assuming the government runs the procurement and construction process properly and ethically, they should be able to reduce the ultimate cost of the wall through taxes paid by the firms and people working on the wall and all of the indirect spending associated with their employment. That brings down the per immigrant cost even more.

Should Democrats accept Trump’s initial offer? Of course not. It’s worth bargaining for much more. Will hard-core immigration opponents look at the same math you just read above and decide that $25 billion isn’t nearly enough for allowing 1.8 million Dreamers to stay? Probably.

But when you get past the emotion and the base politics on both sides, this is an economic question and an economic choice. Are the Dreamers worth a little under $14,000 each? By my math, they certainly are. 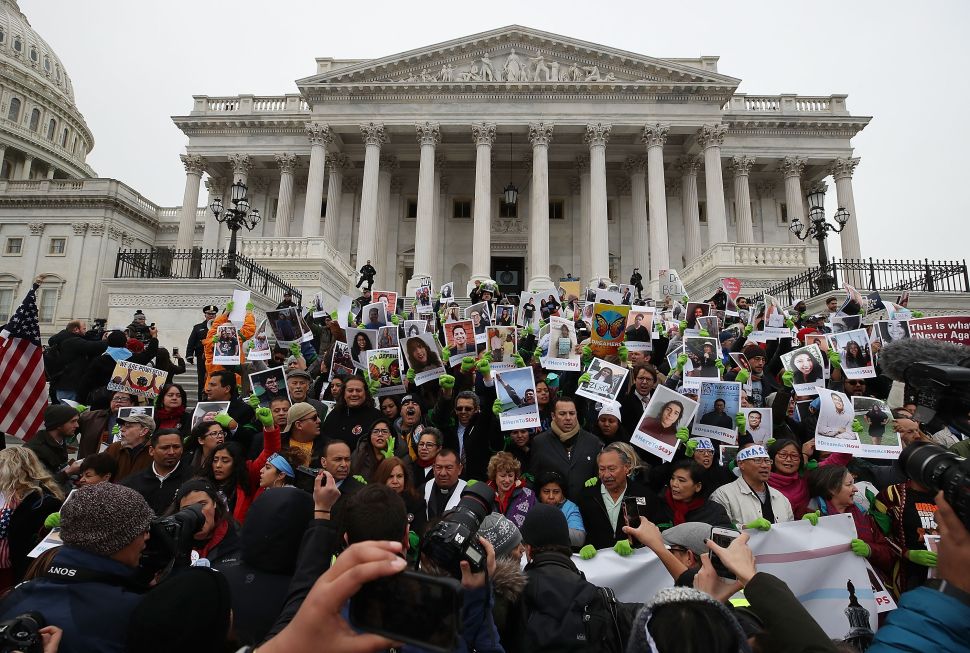