Just as the art world starts to swing into high gear after the haze leftover from December’s Miami Art Week and holiday hoopla, Untitled, San Francisco launched its second edition this past weekend. Over 50 exhibitors from 11 countries participated, with the notable addition of powerhouse New York and London gallery David Zwirner joining the lineup this year, an indicator of maturation for the budding Bay Area edition of the fair, which originally started in Miami Beach in 2012. Running January 12 through 14, the curated art fair touted a new director, former Simon Lee gallery director Manuela Mozo, and a new location at the iconic Palace of Fine Arts, a monumental gem of neoclassical revival architecture in the city’s Marina District.

If proper heating is any benchmark of success, then this year’s Untitled, San Francisco was leaps and bounds better than the inaugural iteration last January, during which exhibitors shivered next to space heaters hastily couriered via Amazon Prime to the original Pier 70 location. “The infrastructure of the building and its location in general is much better, simple as that,” Lisa Carlson, senior director of New York’s Jane Lombard gallery told Observer, noting that the Palace’s proximity to FOG Design+Art fair prompted more visitor crossover this year. The five-year-old FOG seems to have finally rooted itself in the San Francisco culture scene, if its sold-out gala las Wednesday is any indication.

The advent of fairs like Untitled and FOG, along with the major re-opening of SFMOMA’s updated building and the recent installation of blue chip gallery outposts like Pace Gallery and Gagosian in the area over the past couple of years indicate that the Bay Area art market may well be growing. This, of course, is spurred in large part by the blossoming bank accounts of those in the tech industry—the region consistently boasts one of the highest concentrations of billionaires per capita in the world. Yet dealers say they are still trying to figure out how best to appeal this new collector demographic, which is often younger and greener in the realm of art buying.

According to Carlson, that’s the big difference between the San Francisco and Miami editions of Untitled. “The Miami scene is already all built-in, you have all the major collectors, curators, writers coming there. It’s an essential stop on the art world map at this point,” she said, explaining that it’s easier to take a few liberties with what they show in Miami. For their booth at San Francisco, the gallery spotlighted works by Kristin McIver and James Clar, both of whom riff on digital culture and social media in their work, as evidenced in McIver’s cheeky Facebook selfie series made up of simple text descriptions of people’s profile photos mounted on clayboard and backed with mirrors so viewers catch glimpses of themselves at the same time. “We wanted to show some younger artists with a digital slant with works priced in the $5 to $25k range,” she said.

Chicago-based dealer Monique Meloche agreed with this approach. “We’re showcasing newer emerging artists that have a few lower price points here,” she explained. Her booth featured works by up-and-coming artists Sheree Hovsepian and Ben Murray, as well as Brendan Fernandes and Nate Young, who she featured last year and brought back to jog visitors’ memories. “It seems like the crowd here is slower to make purchase decisions,” Meloche said. “We knew that going into it though, and we made some good sales last year, which is why were willing to try the fair again this year.”

Yet Carlson notes that tastes still seem a bit more regional in San Francisco, despite the fact the tech crowd is not only younger but also very international. Carlson grew up in the Bay Area and her parents were dealers of California modernism, a poppy yet pared down aesthetic that permeated the West Coast in the mid-century as seen in works that range from the hard-edge painting of Karl Benjamin to the sculptural works and installations by Craig Kauffman and Robert Irwin.

More than one booth seemed to take this historical moment as its inspiration and, on the whole, the works on offer were relatively tame in subject matter and medium across the board. This perhaps underscores that the fair is still trying to pin down its audience leading exhibitors to err on the safe side with the work they showed. There was a strong preference for painting—not unusual for fairs generally speaking—with notable works by emerging U.K.-based artist Xiao-yang Li at London’s Narrative Projects and a selection of lesser seen works from the 1960s by Photorealist painter Howard Kanovitz at East Hampton’s Eric Firestone gallery.

At the close of the fair, the Chinese Culture Center was pleased to report that an unnamed major institution picked up their three-channel video installation by Chinese-born, San Francisco-based artist Zheng Chongbin. “We’ve participated in a handful of art fairs over the years, but it’s expensive and a lot of work to pull together for already cash and staff strapped nonprofits,” assistant curator at the Chinese Culture Center Ziying Duan told Observer. Untitled was a good opportunity for them to spotlight an artist they’ve been working with for over a decade and showcase the work they do to highlight artists who are part of the global Chinese diaspora phenomenon in art.

Indeed, the number of area non-profit organizations, institutions, and local galleries at Untitled could be seen as the thing that sets it apart from other fairs. “We’re grateful to Untitled for the way they’ve proactively reached out to us and a number of other nonprofits to exhibit here,” said Sarah Pritchard of SOMArts, one of six city-supported cultural centers in San Francisco that exhibited at Untitled. A lot of nonprofits and artist-run spaces are currently at risk in the Bay Area because of skyrocketing rents and aggressive gentrification spurred by the influx of giant tech companies and their comparatively high-rolling staff.

Other nonprofits represented included CCA Wattis Institute for Contemporary Arts, exhibiting a selection of works from their prints and editions program, and Minnesota Street Project, a warehouse compound of galleries, artist studios, storage, and production facilities located in the city’s Dogpatch district.

“Exhibiting the artists that we work with and promoting what we do in this type of commercial setting makes us visible to a lot of people who may not have otherwise known about us,” Pritchard told Observer. “Ultimately nonprofits and small spaces are a vital part of a city’s cultural scene and it’s good to see some of what’s actually happening here reflected in a major fair.” 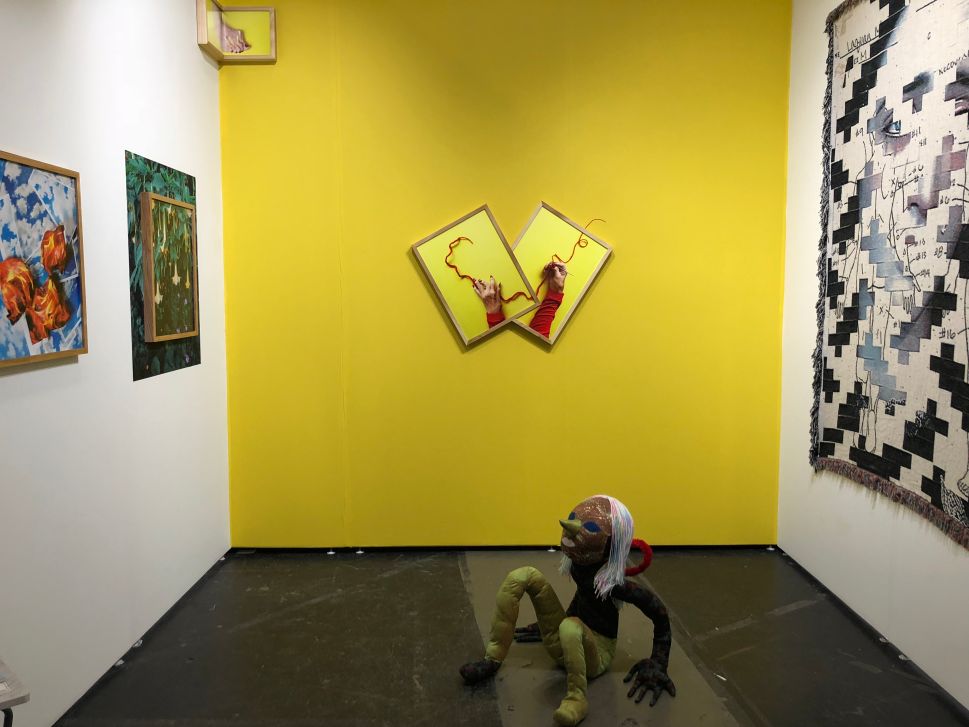