It’s happened to everyone—you’ve woken up from a dream feeling totally shook. But you can’t really put your finger on why it has affected you in this way. Though it’s a universal experience, it’s also a very isolating one; you can’t share it with another person, because your dreams are your own.

But, what if they weren’t? What if you discovered that your dreams were linked to someone else?

This is the premise of Falling , a series about people who have no connection to one another, and yet who slowly realize they’re all dreaming separate pieces of a single story. Not only that, but the visions they’re seeing could hold the key to the world’s fate.

“We call this an exciting and odd existential drama,” showrunner Remi Aubuchon told Observer. “It’s really about people trying to figure out who they are and where they belong in the world. What’s fun about this genre is that you can talk about real human issues and you have cool stuff like people dreaming.”

Aubuchon explained the transition from the first season of the series to the motivation behind the current story arc. “It felt that the first season was an intellectualized drama and we wanted to put some adrenaline in it and open up the world.”

The series was created by Henry Bromell, who worked as a writer and producer on Homeland and Homicide: Life on the Street. Sadly, Bromell passed away unexpectedly before the second season. Aubuchon felt comfortable picking up the reins from Bromell, referring to him as a mentor. “I know his themes well, which are all about contemplating existence.”

About the characters’ trips to the subconscious that take place on the show, Aubuchon revealed, “Last season it was hard to tell when people where dreaming and when they weren’t. This season we made a choice to really distinguish what’s a dream and what isn’t. One of the fun things is figuring out how to do that. We had to really think about what kind of dream deserves what kind of treatment. That’s been one of our favorite things this season.”

The dream sequences aren’t all about using visual effects, said Tim Andrew, a director on the series. “One of the great things is that we can have every dream look different. We challenged everyone in every department to make things more interesting. We do things that defy the laws of physics, like having it rain inside. The simpler [these effects]are, often the more impressive.”

He insists that the dreams aren’t just to make the show more visual, that each sequence has a distinct purpose. “It’s all story driven and it’s all information, even if [the characters] don’t know the information that they’re getting in that moment.”

As for more about narrative of this season, new cast member Sepideh Moafi, who portrays Detective Alex Simms, revealed, “We have a serial killer who goes into people’s dreams and gets them to commit crimes. Now we’re trying to make a case with what we can use in court.”

Will Yun Lee who plays Taka, Moafi’s partner in the precinct, says, “In season one, I was alone a lot and I didn’t do a lot of detective work. [This storyline] ties into our characters and it gives the show an active boost for some adrenaline, fun and horror.”

On a character level, David Ajala, who plays fellow dreamer Burton, said, “I call it teething problems. [The characters] have these abilities, but they’re not sure how to use them. They’ve become like a mini-family in working out their skill sets. Then there’s the next stage of learning the rules and then once we learn them something happens that just flips that up and the jeopardy increases. That takes us to a primal place because we’re always just trying to survive.”

Working on a show with such deep themes has affected the actors in interesting ways, many of them say.

“I go through phases where I’m aware of my dreams,” said Moafi. “I’m doing a workshop on the weekends where I play this character and just the other night I had a dream where I was entirely in character. I can’t help but to think that has to do with this [show]. I absolutely think this show has had an impact on the way that I receive my dreams.”

Ajala added, “[This has made me realize that] the scope of the dream world is expansive and it’s encouraged me to use my imagination more.”

Laughing a little, Aubuchon added, “We’re a show about dreaming, so everyone starts talking about their dreams. Sometimes they tell you something and you think, ‘I wish you hadn’t told me that!’”

Giving his best sales pitch for the show, Ajala says that he hopes viewers will tune in because of how the show might actually affect their own dreams. “What’s going to be really cool is when people watching see how tangible the concept can be and how you can lucid dream. So the moment you take a concept that feels like it’s out of reach and bring it into their hands, not only will people become more engaged, they’ll be more invested because they can actively tap into it.”

Aubuchon added, “And there’s a ton of action and people will love that.”

Moafi confirmed this as she said, “I have a pulled muscle in my right leg [because of the action scenes]. I love the action of it!” 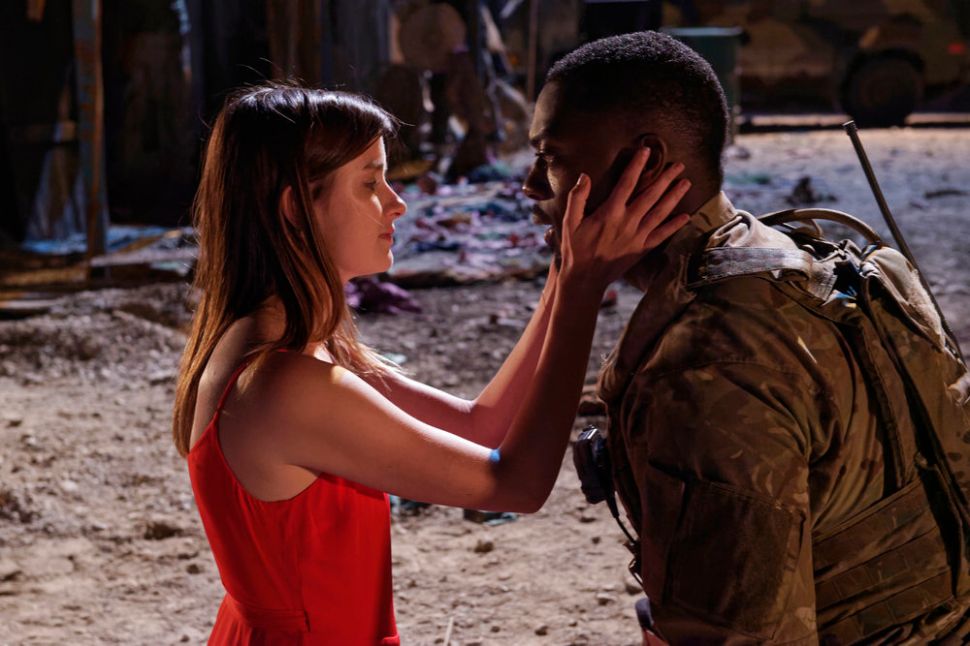