In yet another batch of immigrant-bashing last week, the insolent Tucker Carlson of Fox News Channel attacked Phoenix City Councilwoman Kate Gallego with “questions” that were really taunts.

“How many illegals do you need in your city to make it richer?” Carlson demanded. “Would more be better? How about 10 million? Would that make it even richer?”

His guest tried to tell Carlson that immigrants helped build the American tech industry. The host didn’t care to hear it from this elected official with her Hispanic surname and her empathy for people who lack Tucker Carlson’s white skin.

“How many big tech companies were started by people from Central and South America, Latin America?” Carlson asked. The meaning of Carlson’s “question” was clear: Brown-skinned, Spanish-speaking people are inferior to bigoted sophists like Tucker Carlson.

He’s in his glory these days because immigration debate is all the rage. Carlson and Fox’s other prime-time hosts are drawing big audiences by pushing a line of fear and hate against DACA Dreamers, Democrats and decency. It is toxic, offensive and effective.

At the start of this ad, the screen shows a big, mean Hispanic man who killed two cops. Pictures of the uniformed dead men appear. The killer speaks words printed on the screen.

“The only thing I f***ing regret is that I f***killed just two,” the man says. “I will break out soon and I will kill more.” It is up to the viewer to realize this man represents all immigrants and, perhaps, everyone in Latin America.

The ad’s message is one preached well by Brother Tucker. He’s so blatant he’s become the justified target for backlash from liberals. And he’s not happy about it.

On Monday, Carlson attacked Joy Reid of MSNBC for something she said Saturday.

One of Reid’s guests was an ethnologist who traced Carlson’s American roots back to a great-grandfather—Cesar Lombardi—who arrived in the United States in 1860 from Switzerland and left his writings.

Lombardi wrote that he came to the United States because of the “narrowness of opportunities” in Europe and a “violent desire” to “seek my fortune in foreign parts.”

Reid reflected on the irony.

“Tucker has been one of the most aggressive at putting forward what a lot of people have seen as a pretty blatantly white nationalist view of what immigration should be like,” Reid said.

She chuckled while she said it, but not in good humor.

Much offended, Carlson whined for a few minutes at the beginning of Monday’s show. Curiously, he claimed he had no knowledge of his ancestor.

“I had zero interest in the subject,” Carlson insisted.

After accusing Reid of race-baiting, Carlson turned to one of his base arguments: Immigrants are poor and, therefore, not welcome.

“We’re suspicious of efforts to remake our society wholesale,” Carlson said, “especially so a small group of tastemakers can feel virtuous and have cheaper nannies.”

One such guest last week was Rebecca Kaplan of the Oakland City Council. She referred to the increasing pace under Trump of ICE deportations of long-time residents who have committed no crimes.

“Oh, come on,” Carlson said. “This is bigger than whether a family in Oakland was hassled by ICE.”

Another such guest, on Tuesday night, was Albany Mayor Kathy Sheehan. Carlson introduced her segment with a video report of DACA Dreamers peacefully protesting outside Disneyland.

“Not grateful,” Carlson called them. “Angry, entitled… They have no right to be in America… Menacing demands… and all the free stuff that goes with it… These people… Track every one of them down and boot them out of the country for good.”

When Mayor Sheehan mentioned how some coverage of immigration results in a polarized conversation, demonization of foreigners and an “us-versus-them” mentality, Carlson interrupted her.

She was in the studio with Carlson so he didn’t treat her as disrespectfully as he does those on split screens from remote locations.

Those “guests” can’t see him at all or hear him so well, so Carlson mutters insults under his breath, giggles like a child and makes faces.

It matters little to him that some points contradict. All excite the hard-core Trump base of angry white people. Among them are those who march with torches and those who chant hostile threats at Trump rallies.

That side includes the NRA gun guys, too, and all “my generals” around Trump. Plus, Trump has at his disposal a craven television network built around hate-mongers like Tucker Carlson.

Imagine what the backlash would have been like if the shooter who slaughtered 58 people in the Las Vegas gun massacre had been an “illegal immigrant” or a “radical Islamic terrorist” from far away.

Demagogues make bad blood boil. People like Carlson and Trump are masters of the kind of propaganda that incites the worst emotions in the worst people. Before this all gets better, it may just get much worse. 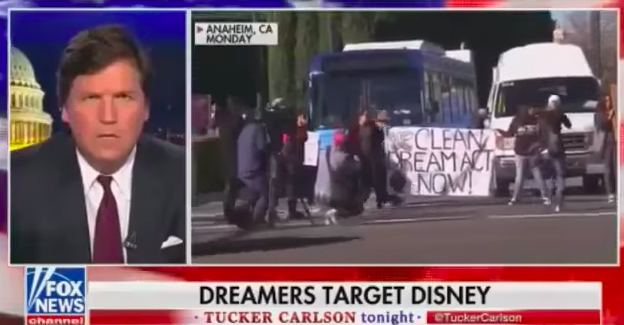