When it was announced that Johnny Depp would retain his role as the evil wizard Grindelwald in Warner Bros.’ Fantastic Beasts franchise following domestic abuse allegations, it sparked a considerable amount of controversy among fans. We even argued that WB should just go back to Colin Farrell, who played the role in the first film, if for nothing else than avoiding a public relations headache.

But then director David Yates came out in defense of Depp as did J.K. Rowling and the studio and, well, here we are with Depp set to reprise the role in November’s Fantastic Beasts: The Crimes of Grindelwald.

But what does Harry Potter himself think?

Actor Daniel Radcliffe recently opened up about the matter to Entertainment Weekly where he admitted that “it’s a very hard thing for me,” while also acknowledging that the film’s producers “gave me a great start in life and an amazing job.”

However, he realizes it’s a complex issue.

“I can see why people are frustrated with the response that they were given from that… I’m not saying anything that anybody hasn’t already said—and this is a weird analogy to draw—[but] in the NFL, there are lots of players arrested for smoking weed and there is other people’s behavior that goes way beyond that and it’s tolerated because they’re very famous players. I suppose the thing I was struck by was, we did have a guy who was reprimanded for weed on the [original Potter] film, essentially, so obviously what Johnny has been accused of is much greater than that,” he said.

The 28-year-old actor is referring to Warner Bros.’ decision to fire actor Jamie Waylett, who played Draco Malfoy’s henchman Vincent Crabbe in the first six Harry Potter films, after he was arrested for growing 10 marijuana plants in 2009. Many fans online have pointed to that incident and accused WB of hypocrisy, though Waylett was hardly a household name and did not hold a leading role. The actor was later arrested for packing a homemade bomb during the 2011 London riots, according to the BBC.

In December, Rowling defended the decision, writing on her official website: “Based on our understanding of the circumstances, the filmmakers and I are not only comfortable sticking with our original casting, but genuinely happy to have Johnny playing a major character in the movies.”

Fantastic Beasts: The Crimes of Grindelwald is due out on November 16. 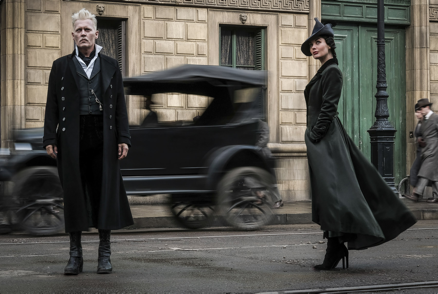