Underneath a Jesus crucifix, conductor Michael Feldman plays God. Commanding St. Veronica’s Orchestra inside a West Village Church, Feldman teases Bach’s delicate flurries with opera then unleashes a Haydn symphony as horns reverberate off marble pillars. Sitting quietly in the audience is the conductor’s son, Matt FX Feldman. As the music supervisor for television shows on MTV, Hulu, and Comedy Central, Matt FX took underground dance music mainstream, shaping today’s culture—success he owes to his father’s lessons in classical composition. Though both Feldmans conquered their own respective corners of New York City’s towering music landscape, their career paths are rooted in music theory and a father-son rivalry as turbulent as Beethoven’s “Appassionata.” Even with critical acclaim given by musicians and laymen alike, with plenty of praise from the New York Times, neither can quite surpass the other’s legacy.

Michael founded St. Luke’s Chamber Ensemble in the mid-70s and oversaw the organization’s expansion as it premiered works from composers Andrew Lloyd Webber, Joan Tower, and Anthony Davis while taking up residencies at Lincoln Center, Brooklyn Academy of Art and Music, and Carnegie Hall. But as the ensemble grew, Michael, a trained clarinetist, resigned in 1995 over fears he was not the sophisticate that other legendary conductors were.

“According to him, a great conductor is someone who speaks all the romance languages and plays an instrument in every family of the orchestra,” Matt FX told Observer. “As soon as he saw some promise in me, in piano and singing, he wanted to make sure I studied double bass and French horn.”

As a child, Matt FX learned the nuances to chord progression at the Episcopalian boarding school St. Thomas and through private lessons with his father. For five years, he sang in the school choir six times a week as a boy soprano. When school wasn’t in session, he practiced piano and sight reading for hours alongside his father.

“He revealed to me later on that this was part of a master plan for me to become the conductor he never was,” said Matt FX.

“It was World War III every other day,” the prodigal son’s brother, Marcus Feldman, said of the lessons.

Singing in Churches proved exhausting, even if one of them was the Sistine Chapel, and Matt threw his final exams to ensure he wasn’t accepted into any of New York City’s notoriously competitive private schools. For high school, he attended LaGuardia School for the Performing Arts (rapper Azealia Banks was a friend). Here, much to his father’s dismay, Matt FX quit piano to learn music production, breaking with his father’s vision of becoming the conductor he never was. Even after graduating as president of his class and emerging as a breakout DJ and music supervisor, spinning at Manhattan hotspots Le Bain and La Baron, the son’s dive into production created tension within the family.

“I know that if Matt had wanted to be a classical musician, he would have been fantastic,” Michael Feldman told Observer. “He has a very deep understanding of how music goes. I was very disappointed when Matt said to me one day, ‘Dad, this isn’t what I want to do. I’m going on the other side of music.”

“He wasn’t the greatest technician at LaGuardia, but he was the only one who could sight read anything,” added Michael.

At just 18 years old, after meeting someone who tracked down the show’s producer to throw in a good word, Matt FX was hired as the music supervisor for MTV’s American remake of Skins. Navigating the music industry as a teenager was difficult, but Matt FX used his background in music to curate a diverse soundtrack that mixed Phantogram and Animal Collective’s psychedelic pop with dubstep from Rusko. Although Skins was torched by critics, the soundtrack showcased emerging genres that have since defined the music industry.

“When I first heard his work on Skins, I was absolutely amazed at how he understood the essence of each scene,” Michael told Observer. “He was just a kid, but he had a sense of where it was.”

After Skins, Matt FX supervised the music production for Comedy Central’s breakout hit Broad City, carefully defining each New York borough through an eclectic mish-mash of transition beats, demos, and pre-existing tracks from emerging rappers and producers. His success on the series cemented him as one of the music industry’s shapers of culture, dovetailing into music supervising roles for Billy Eichner’s Hulu series Difficult People, Lorne Michaels’ Man Seeking Woman, and Comedy Central’s Detroiters. He launched his own music label, released Gorillaz style collaborations under the moniker Scooter Island, and threw raves in Brooklyn. But connecting all of the projects is a true understanding of music foundation that goes back to his lessons with his father.

“I still don’t know if he truly gets all of it. He understands it abstractly,” said Matt FX. “I’ve thought a lot about sampling my old choir stuff and an orchestra. I think that’s where I might move towards in the future.” 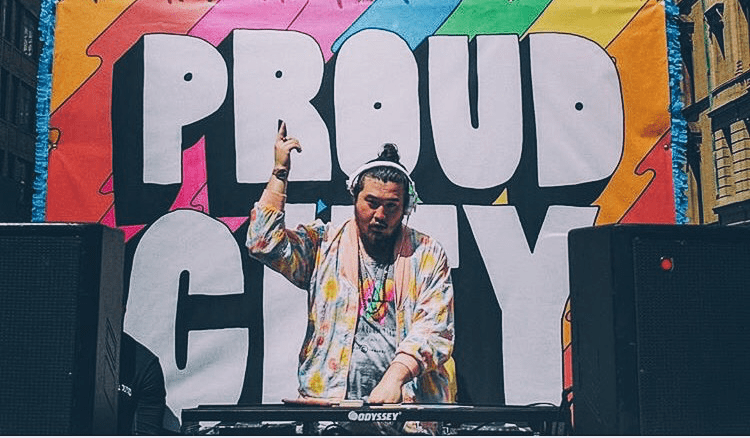