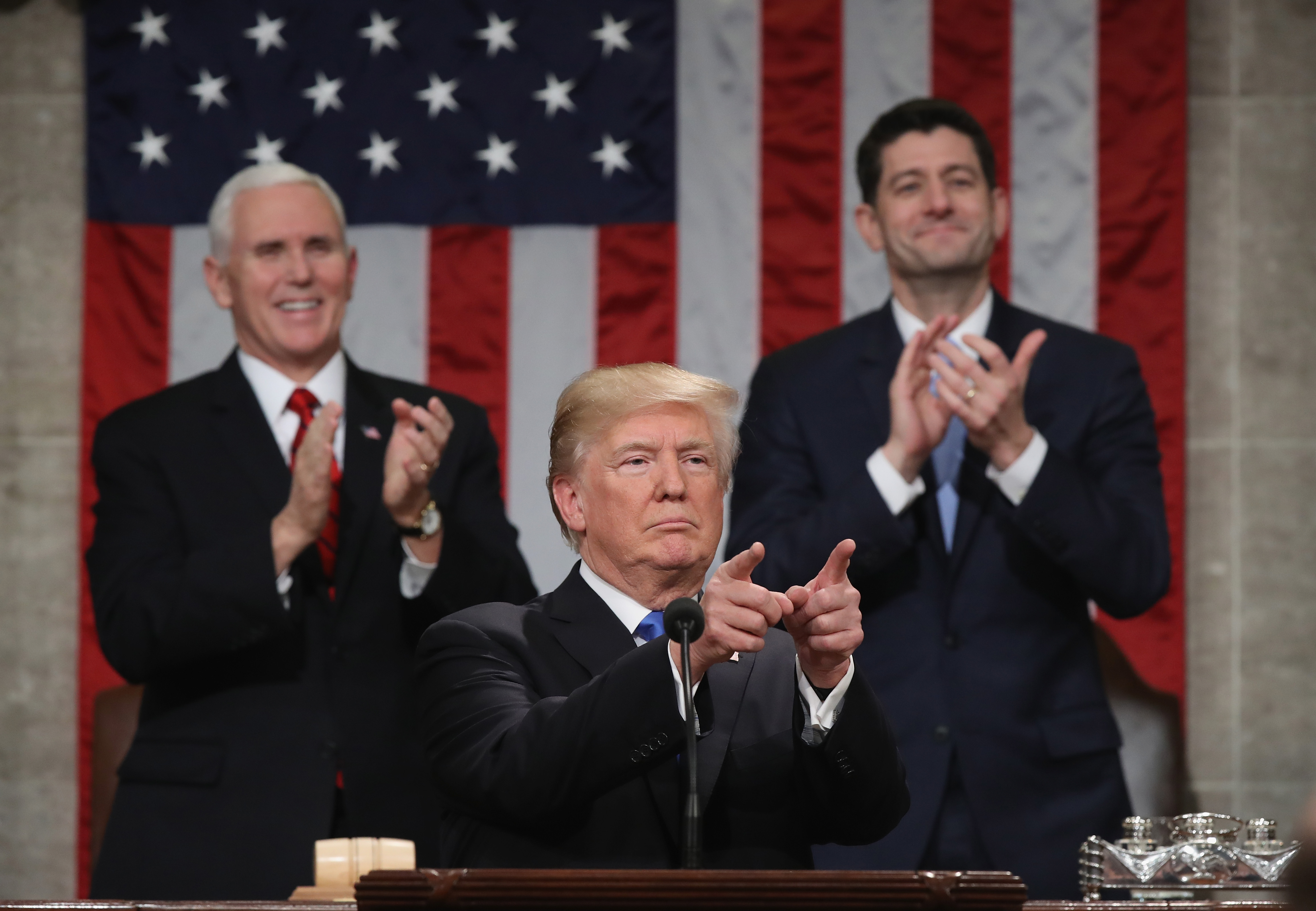 President Donald J. Trump delivers the State of the Union address as Vice President Mike Pence and Speaker of the House Rep. Paul Ryan look on in the chamber of the House of Representatives on January 30, 2018. Win McNamee/Getty Images

Last night was the opening round of the 2018 political boxing match between Republicans and Democrats. President Donald Trump may likely have won the first round on points, giving the GOP a good start in the battle for Congress in this year’s mid-term election.

Sure Massachusetts Rep. Joe Kennedy III was a good speaker. Unlike most who provide the opposition party response to the State of the Union, Democrats provided a great backdrop for such a speech. Instead of a stale podium, it was delivered in a setting with a good audience, perhaps even topping the brilliant decision of the GOP to have Virginia Governor Bob McDonnell follow President Barack Obama by speaking before the Virginia state legislature to cheering Republicans.

And Kennedy delivered the speech quite well, showing poise as well as passion, making the cheers from the crowd as genuine as possible. So how did Democrats manage to lose to Trump, who slumped in the polls for much of 2017 and had less of the oratorical skills as Kennedy, and many other historical or contemporary politicians? Here’s how.

As much as Trump’s State of the Union will get knocked for how it handled the immigration debate, Republicans have the edge because Trump framed each issue as how it will affect all Americans. Democrats provided a stronger pitch, but it was explaining how the most vulnerable will be better protected.

This isn’t to say that we shouldn’t help DACA recipients and people facing discrimination for a variety of reasons. But the issue could have been framed in a way that would get the average America to realize that he or she will benefit from such reforms. Dreamers shouldn’t be helped just because they need help or because it’s an issue of fairness. Such groups, as well as many legal immigrants have helped generate the enthusiasm, energy and entrepreneurialism to benefit all Americans, not just the immigrants.

And yes, Trump’s inclusion of everyday heroes was brilliant. Normally, that’s a Democratic idea to include such guests or even stories. And the Republican president’s symbolism of the National Anthem and flag will probably be enough to keep the GOP base happy enough to overlook his compromise on DACA. The attempt to be bipartisan, or at least appear to be so, contributed to why Trump’s speech is receiving generally positive reviews.

Trump pitched his ideas generally and avoided getting bogged down in details. His focus on infrastructure didn’t get too much into the weeds, but it gave a rough idea that we should expect some sort of action. Normally this is a pro-government issue, and one that Democrats have the edge on, but Kennedy punted on it because he needed to say how his party would do it better. And while Democrats groused that Trump ignored climate change, Kennedy had little to say about environmentalism and what his party would do to combat it.

Trump focused on firing bad government employees, getting rid of regulations, boosting gun rights, cutting taxes, and more. These are issues that apply to all. Democrats could have explained specifically why each of these isn’t working, won’t work, or would hurt all people, but they did not do so for some inexplicable reason.

Trump credited himself for the economy being in good shape and boasted about his tax plan. Kennedy might have reminded voters that Democrats could claim credit for this, along with the successes of the Clinton and Obama years, who fixed recessions from the Bush family. Curiously, Kennedy ceded the issue in favor of focusing on Trump’s divisiveness. Viewers all know how polarized the country is, but we don’t know what Democrats will do about it.

For Democrats, it was an issue of fairness. As Kennedy said, “We see an economy that makes stocks soar, investor portfolios bulge and corporate profits climb but fails to give workers their fair share of the reward.” Much of his economic talk was about how some make more than others. If Democrats want to win in 2018 or even 2020, they should learn from the Social Democrats of Germany, who lost on that issue when challenging beleaguered Christian Democrat Chancellor Angela Merkel.

3) Who The Speaker Is Matters.

The choice of Rep. Kennedy III himself is a curious one. He’s there because of his youth and passion, right? Many Democrats can claim that. But even though he’s young, he was a throwback to the past. If his last name was anything but Kennedy, would he really be giving the speech? It’s all about being part of the Kennedy family, and the decision to tap him was about his famous family, which goes against the notion of family trumping talent.

And if there is a Kennedy speaker, why not own it and harken to policies that the Kennedy brothers clearly stood for on civil rights, taxes and foreign policy. If you’re going to have a scion, own the family legacy at least.

Despite outperforming Democrats, Trump made a mistake or two. On the issue of immigration, he angered more than just Democrats in Washington by going after MS-13 (a good idea) and then pivoting quickly to immigrants, giving the impression that such immigrants are little more than a collection of gang members. Democrats pounced on him for this the the next morning.

It seems Republicans forgot the lessons of the 2017 Virginia Governor race, in which Ed Gillespie lost to Virginia Lt. Governor Ralph Northam by making the same mistake: trying to link legal immigrants to MS-13. As the Dalai Lama is alleged to have said, “When you lose, don’t lose the lesson.” The GOP can’t afford to repeat its mistakes on this.

But overall, Trump has seen a path toward helping the GOP retain Congress. Democrats stumbled last night and must understand that they need to pitch their ideas better in order to reclaim their momentum. 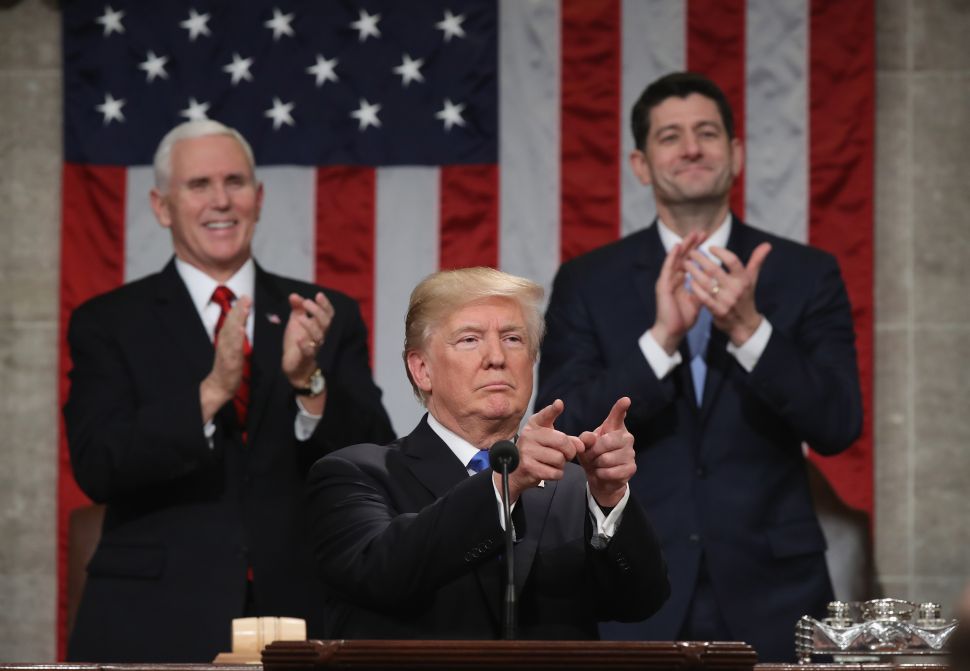