North and South Korea announced Wednesday that their Olympic athletes will march together under a common flag at the opening ceremonies of the upcoming Winter Olympics. Not only that, but during the games themselves, they will field a joint women’s ice hockey team and may compete as a single team in other sports.

It seems difficult to imagine two nations, (or two parts of the same nation) still “technically” at war, suspending enmity and animosity, if only temporarily, to peacefully compete against each other. But happily, history offers longstanding precedent.

From 776 B.C. and thereafter for 11 centuries, without fail, every four years, a few months before the ancient Olympics convened, heralds from Olympia travelled throughout the Greek world, announcing the coming contest and proclaiming a “sacred truce.” From that moment—no matter what wars raged—all competitors and spectators, even if they were also great enemy warriors, could travel to and from Olympia through hostile territories, unmolested. No one would attack them, nor of course would they ever attack Olympia itself.

Sparta dominated the Olympics for centuries and once violated the sacred truce in a minor attack on a nearby part of the region. The Olympic council banned the Spartans from participating the 420 B.C. Olympics. But Sparta’s collateral attack pales next to the terrorist massacre of the 1972 Israeli Olympic team. Those who planned and carried out that mass murder of competing athletes profaned the sanctity of peaceful competition, culture and play that informs the Olympic spirit then and today.

Of course, as all elite athletes realize, competition itself requires cooperation. Opponents agree to rules which limit their movement, establish standards of superiority and make results meaningful. So even athletic opponents fighting for victory experience a combination of competition and cooperation.

But it’s one thing to compete peacefully against fellow athletes from hostile nations, and quite another to compete jointly with them on the same team.

Can a team, hastily thrown together, composed of members from nations at war—with individuals who may even dislike each other—possibly succeed? It may depend upon the nature of the team sport. Like nations themselves, struggling to find the right balance between the whole and its parts, team sports range from loosely associating individual members to a single undifferentiated group united in a common struggle, willingly submerging, even obliterating their individual identities, all to serve the collective good.

At one end of the continuum we find the “arithmetic team” as Prof. Paul Gaffney, a sport philosopher has classified it. Individual players support and challenge each other to improve, but each member essentially performs autonomously and independently of each other. Individual results “add up” to some composite team score. We saw that in the competitive team gymnastics phase of the summer Olympics. We don’t see it much in Winter sport.

Slightly more unified, a “coordinating team,” e.g. the relay, sums up individual contributions into a final score. Members, however, briefly but crucially must coordinate with each other. Further along the continuum, in differentiated team sport such as baseball which the Japanese have chosen to debut in the 2020 Olympics, team members regularly interact and coordinate with each other to produce a collective result while performing clearly specialized roles: Pitcher, catcher, pinch hitter, and so on.

More tightly integrated still, the Olympics have already given us flowing team sports such as hockey, where players react to opponents and coordinate with teammates, assisting and helping each other out, constantly moving kaleidoscopically with shifting roles on offense and defense as passers, blockers and scorers.

Finally, in its most unified and some might say highly developed form, team sport such as rowing or luge or bobsled can entirely obscure each individual member’s personal contribution to the observer (but not the participants) to produce a common effect. The team pulls or leans together, and when they perform at their best, the boat or sled seemingly races itself, sliding, gliding, lifting at maximum speed. The Koreans haven’t (yet) announced they intend to field a joint bobsled or luge.

Can a team ever achieve a true dynamic without practicing together over a period of time, learning to coordinate and compensate for each other’s strengths and weaknesses? And can they do so while individuals on that team might harbor animosity toward each other, and the nations from which they come threaten and detest one another? Experience and analysis suggest they can. Notable championship professional teams have sometimes been composed of stars and superstars who expressed dislike for each other and never socialized off the court or track. All-star teams, and national Olympic basketball and hockey teams from Western nations have been hastily thrown together and yet achieved a collective excellence by virtue of the superb individual talents blended.

Even in the most integrated of sports, rowing, where individual rowers strain to their physical limits while achieving maximum speed through perfect synchronicity, I’ve witnessed a world-class competitive team, Chinook Performance Racing, achieve success in a short period of time. Comprised of athletes from different nations, the teams of women who competed in boats of four and eight at this year’s Head of the Charles, one of rowing’s premier regattas, had trained separately and never rowed together before, but after two brief practices were able to coordinate well enough to win gold medals.

As Erving Goffman, the great sociologist observed, in The Presentation of Self in Everyday Life the status of teammates “constitutes a kind of intimacy without warmth.” It need not be “organic, slowly developing with the passage of time spent together.” Instead, with team sport, like war, it’s a relationship “automatically extended and received as soon as the individual takes a place on the team.”

Whatever has really brought North and South Korea together, all persons of good will must hope this unified Korean team becomes a first step. What begins as intimacy without warmth, that “bond of reciprocal dependence” among members of the same team, will somehow grow into something similar between the governments that have now agreed to allow their best to parade and compete together. 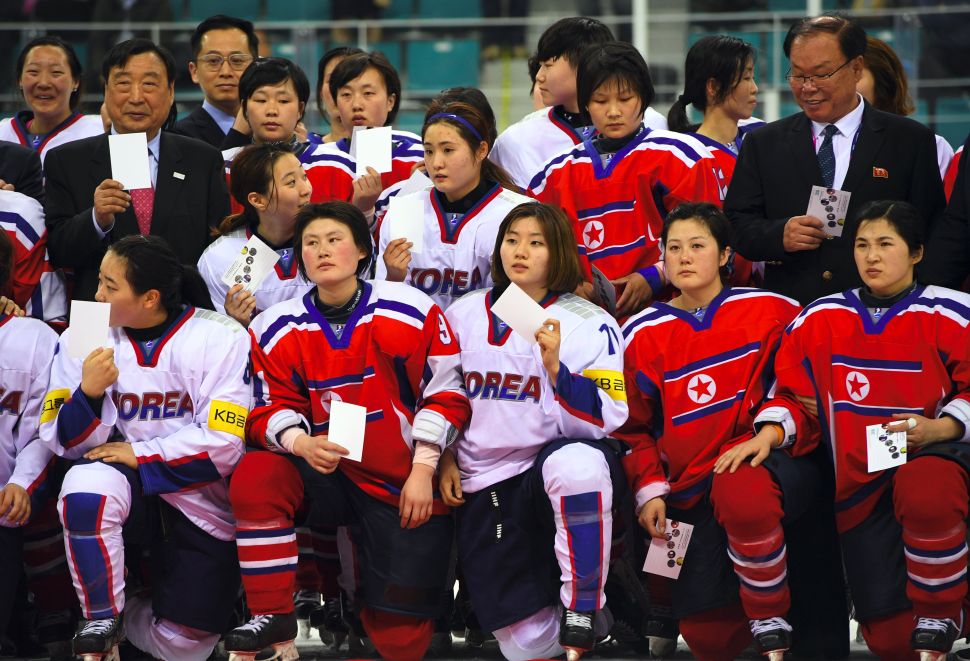