Less than a week after Gawker ran a clip of the infamous sex tape featuring the professional wrestler Hulk Hogan in October 2012, Hogan’s personal attorney, David Houston, received messages from two lawyers in Los Angeles he’d never heard of. The first was a phone call from Peter Thiel’s hand-picked attorney, Charles Harder, offering to assist him and his client with a potential suit against Gawker. That case is now history, literally so, as it resulted in the largest jury award ever against an American media company.

There was a second message, however, that was less well-known and now has its own connection to history. It arrived in the form of a cryptic email:

It was from a Beverly Hills lawyer named Keith M. Davidson, who claimed to represent the parties who had all the tapes and were shopping them to the media, including to Gawker. Davidson would inform Hogan and Houston that the clips which had run on Gawker could be just the beginning, that the leak was a “shot across the bow” to get their attention. There were more tapes, “one that’s more inflammatory than the others…that carries the lion share of the value.” Would Hogan like to prevent anything from happening to them?

The similarities between the two cases don’t end with the lawyer (actually lawyers since Charles Harder ended up representing both Hulk Hogan as well as Donald Trump). In the Hulk Hogan case, Davidson also used a pseudonymous contract, claiming that the $300,000 deal was between “Taryn Bostick” and “Jo Walsh” rather than Terry Bollea and Lori Burbridge (a representative at the negotiations whom the Tampa Bay Police allege was there on behalf of a Florida radio DJ named Matthew Loyd).

It appears to be a playbook for Davidson, wherein he conspires with his clients to extort a well known figure, leveraging media attention to do it. In the Bollea negotiations, Davidson would tell David Houston that his client was the one who first floated rumors of the tape to the media to put pressure on him to pay up. As we know from the FBI recordings that captured these conversations as part of a sting, Davidson and his client claimed to be responsible for the Gawker post that would eventually put Gawker out of business.

“So wait a minute, so what you’re saying is that the person you’re representing…released this to Gawker then?”
“Yes.”
“You know that for sure?”
“Yes.”
“And to TMZ?”
“Yes.”

It would also happen that the “more inflammatory” tapes Davidson mentioned featured Hulk Hogan repeatedly using the n-word. They too would leak, but not for another two years, and when they were, Hogan would be removed from the WWE Hall of Fame.

Similarly, Stormy Daniels was talking to the editor-in-chief of Slate and purportedly in the midst of negotiations with ABC for a Good Morning America appearance, at the same time Davidson was negotiating this six-figure settlement with Donald Trump’s attorney. And now that the money has supposedly changed hands, the story bubbles up again. It makes one wonder what new or remaining pressure from that alleged settlement still exists to exert on the President of the United States of America. Also what hand, if any, Davidson might have had in exerting it. Davidson is quite good at walking right up to the line and dancing upon it. “I don’t know if they were stolen,” he said during the Hogan negotiations “and quite frankly, I don’t want to know if they were stolen.” (Of course, they were in fact stolen).

I have no love for Donald Trump. I have criticized him extensively in this very outlet and elsewhere. His track record shows that he is a serial philanderer, a liar and possibly an abuser of women. However, when a lawyer who essentially specializes in extortion approached him on the eve of a presidential election, he was in an unenviable, if not impossible position—even if he did sleep with Stormy Daniels. After all, simply having an affair with someone does not entitle anyone to a six-figure payout. Threatening to go public without that payoff is extortion—whether we like either party.

There’s no debating that good journalism is often the result of bad sources and shady dealings. Jacob Weisberg showed admirable restraint when he declined to publish the story in Slate, mostly because it appeared that Stephanie Clifford did not want to go forward at the time and because the story could not be confirmed. But perhaps the conversations were nothing but leverage to drive up the price of the settlement. As I wrote in Trust Me, I’m Lying and in my forthcoming book Conspiracy about the Gawker and Hulk Hogan case, in time of kompromat tactics and media manipulation, journalists are going to need to be intensely aware of how easily they can be used as cat’s paws in complicated feuds, negotiations, and even geopolitical fights they know nothing about. The public as well needs to understand how their attention—and desire to shame aberrant behavior—is a weapon that can be used unsuspectingly and cruelly.

“I’m the expert at doing this type of thing,” Davidson would say in a conversation during the negotiation with Hogan’s legal team. And when asked if there was really enough business like that to make a living, according to Houston, Davidson replied,

“Well, we got a lot of people we get caught on tape, and they are not all celebrities. We have family men that are gay and want to keep their gay relationship under cover, so of course we approach them too.”

Which means even the general public is vulnerable to these tactics, and most of us are not nearly as bulletproof to scandal as Donald Trump. Most of us can’t afford to pay that kind of money to make something like this go away. Conversely, one of the reasons we should demand clean and respectable private lives of our leaders is not only for the purposes of character—but because bad behavior can expose them (and us) to illicit influence.

In the Hulk Hogan case, Davidson and his client would be investigated by both the FBI and the Tampa Police Department (and later sued by Hogan and Charles Harder). For unknown reasons they were not prosecuted in either case, but everyone I’ve interviewed who interacted with them found the dealings with Davidson to be chilling and disgusting. This is a man who makes his living exploiting the most private moments of famous and powerful people—and as you can see in the transcripts of the FBI sting, treats the exchanges no differently than you or I might treat selling a bag of golf clubs on Craigslist. This is also a man who needs recruits or deceives news-hungry reporters and bloggers to do his work.

There was a moment in that exchange between Davidson and Hogan that strikes me as significant in retrospect. In the hotel room at the Sandpearl in Clearwater in 2012, Florida shortly before the tapes traded hands, Davidson excused himself to use the restroom, leaving the tapes unguarded on the bed. Hulk Hogan would tell me how in this moment, it occurred to him how easily he could have grabbed them and broken them in half, then kicked in the bathroom door and done the same to the man who had been so stupid as to give him the opportunity. He resisted, telling himself that justice would run its course. That’s what the half dozen officers in the room next door were there for. So he didn’t, and when the FBI and US Attorney’s officially declined to press charges 7 months later, he would come to rue his restraint.

Now, we can imagine, that Donald Trump, a man who had not been shy in his criticism of the FBI, has another reason to hate the agency currently investigating him for a bungled conspiracy of his own.

Ryan Holiday is the author of Conspiracy: Peter Thiel, Hulk Hogan, Gawker, and the Anatomy of Intrigue, which will be released on March 6th, 2018. 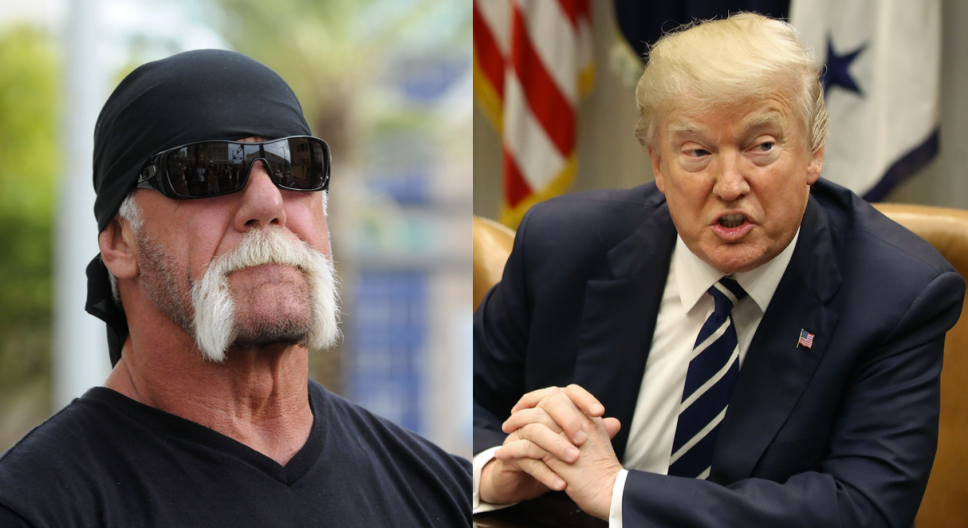