Johannesburg-based artist Serge Alain Nitegeka was forced from his native Burundi when he was just 11 years old, because of the ethnic civil war raging in the country that left his family itinerant, living as refugees, for years. His abstract, geometric paintings—long rendered in red, and white with dark swaths of black and crisscrossed by lines—were a meditation on this meandering. But over the last few years, the shapes and colors of Nitegeka’s art have begun to shift as he incorporates more color and curvilinear forms—what he refers to as a “softening.”

Just before the January 11 opening of his latest exhibition, the artist took some time to speak with Observer about what’s prompting his sudden penchant for bright hues and how trauma can bring new forms into being. Called “Personal Effects in Black,” the show spans the entirety of Marianne Boesky’s dual gallery spaces in Chelsea.

How do specific colors create meaning within your work and why did you limit yourself to certain hues in your painting, especially black, for so long?

That’s a tough question because, to a certain extent, I just did it. But the best way I can put it is that paint, for me, is very logical. These pigments express feelings that can’t be put into words; looking at them on the canvas, they prompt an instant response. They arouse feelings. Black is more interesting than all the other colors, in my opinion, because it’s mysterious, it’s a void. We talk about the nothingness of it, the emptiness. But in that absence there is always the possibility of something. But on the canvas, I like its bruteness, how graphic and delineating it can be, and ultimately the strength of it.

Tell me more about your emotional connection to the color.

Black as a color has always stuck with me, ever since I was a kid. While my family was living in Zaire (now The Republic of Congo) when I was young, I was struck by a volcanic landscape—the soil was so black and rich, and I was quite drawn to it. And it was fun to play in it, so for me, black seems playful as well as potent. I would walk in it and it would go up to my knees. I found that transformation cleansing and therapeutic. The soil is quite metaphorical for a number of experiences in my life, the forced migration of myself and others one of them. That abstracted movement of refugees across borders, that’s transforming, for people and for nations.

Beyond black, you’ve started using many other colors in your work. First it was severe reds and stark whites, but your latest paintings have a brightness to them that’s almost happy in tone, given your use of blues and yellows. How has your relationship to colors other than black changed over the past several years?

I’m very picky and particular with color. I paint as a control mechanism; it’s me trying to regain some control over my life. You can’t necessarily see that when you look at my work, and I don’t need it to be evident. But the process of painting is a way for me to work through really loaded ideas and memories.

So for about several years, my palette was very limited to black, and some white and red. Those were the colors that had resonance for me. In that time, I bought some blue paint but it just sat in my studio for year. I didn’t have courage—or whatever you want to call it—to use it. But when my daughter was born a couple of years ago, it was a sea change in my life. I knew my work had to change. Introducing blue was probably the scariest thing I’ve ever done in my work.

What was so intimidating about it?

That element of not knowing. I knew what red and white and black looked like together. I knew what they made me feel. But what would blue do? But then I tried it, and I liked it, and I wanted to try more new colors. Funny how that works. So I introduced yellow, and now a kind of green.  And now I have many curved lines in my paintings as well, whereas before they were often straight. They’re representative of bending, softening. These works, maybe, are about adaptation. Even the good or mundane changes in life are meaningful.

It’s evident that your work is incredibly personal, even psychological. Is that where the title, “Personal Effects” comes from?

The title is really a reference to some of the sculptures on view, which I call personal effects. They’re like little cargo bundles. This, of course, is a reference to moving around, and carrying what you have with you. But these bundles are also a metaphor for trauma, for these feelings that we end up carrying with us.

Several years ago you started creating wooden immersive installations in addition to your paintings, and you’ll be installing a site-specific edition of these between Marianne Boesky’s two spaces, correct?

Yes, I started making these wooden obstacle course-type installations 10 years ago. If my painting was a way for me to work through the feeling of forced migration, I wanted to find a way for others feel those things. I wanted the viewer to physically experience what it feels like to be forced to move in a particular way. So, in this show, I’ve created a little labyrinth that connects the spaces that will choreograph viewers’ movements between them. But I don’t want it to be restrictive; I see these installations as collaborations between me and the viewer. We’re all part of a story of forced migration, really. History is a narrative of human movement. 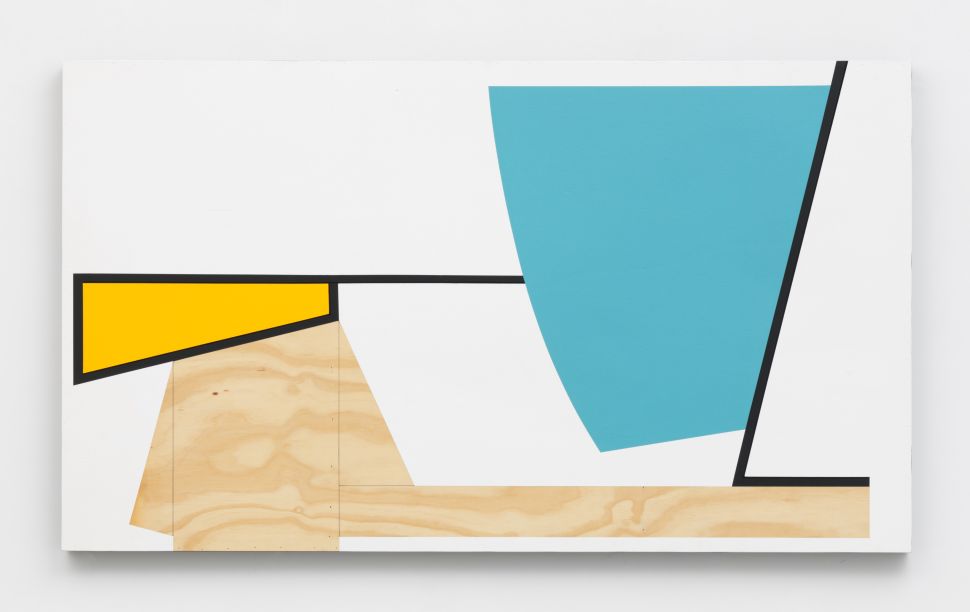