During a protest in Iran, a young woman jumped up on a telephone box and slowly and deliberately took off her white head dress, her hijab.  Tying the hajib to a black stick, she waved it like a flag. This was a massive move of defiance against a regime that has, since 1979, required all women to cover their hair.

Twitter and social media lit up. The incident was first tweeted by an onlooker named Armin Navabi, who posted the video and wrote: “This woman in #Iran took off her #Hijab to protest the mandatory Islamic dress code imposed on Iranian women. #IStandWithHer #IranProtests #Islam.”

This woman in #Iran took off her #Hijab to protest the mandatory Islamic dress code imposed on Iranian women. #IStandWithHer #IranProtests #Islam pic.twitter.com/G6oKHIPA68

Since committing that act of brazen protest, the woman who waved her scarf has disappeared. A new hastag, #Where_Is_She, is dedicated to finding her. Posters and memes have been broadcast across social media asking where this woman is. There have been small protests in the West. Amnesty International made an official appeal to the Iranian government to release her.

Through social media, it has been determined that the woman is 31 years old and the mother of a toddler. According to another tweet, she was arrested on December 27th, released and then rearrested.

For many, this woman has become a symbol of the Iranian people’s protests against their oppressive regime.

As a sign of the nerve that she touched within Iranian society, other Iranian women have been captured on video mimicking her bold and fearless action. In one video, a modestly dressed woman maneuvers into the middle of a busy traffic circle in Tehran, Iran. As cars veer and swerve to avoid hitting her, the woman removes her hijab and swings it in the air above her head.

A woman baring her hair in Iran is an act of defiance far more bold and dangerous than streaking was in the United States during the wild 1970s.

Seven-thousand modesty police in Iran are tasked with the narrowly defined job of protecting against “bad hijab” and “immodest dress.”  They used to arrest women and send them to prison for hijab infractions, like an improperly positioned headdress or a situation in which too much hair is exposed. In December 2017, that punitive policy eased up a bit.

That’s when Brigadier General Hussein Rahimi, who assumed the role that supervises Iran’s modesty police, announced that Iran would no longer send women to prison for “bad hijab.” Instead, he said, they would be sent for reeducation at what the regime calls counseling centers.

As quoted in the Daily Mail, Rahimi said, “According to a decision of the commander of the police force, those who do not observe Islamic codes will no longer be taken to detention centres nor judicial files opened on them… We offer courses and 7,913 people have been educated in these classes so far.”

Iran opened 100 of these counseling centers in Teheran province alone.

Modesty police are not the only law enforcement agency looking over the shoulders and above the heads of women in Iran. While it is very difficult to get real or current numbers about most things in Iran, traffic police reported that in 2015 they confronted 40,000 women with “bad hijabs.” Many of the women in violation of the law had let their scarves fall as they drove. The police gave many violators light sentences. They were fined and let go, or they were fined and had their vehicles confiscated for “bad hijab.”

In the eyes of the regime, this new approach is considered liberalizing. Once upon a time, open defiance of the hijab was met with severe and swift action. Now it is just swift.

The young mother swinging her white hajib on the telephone box is one example of the desire for change coupled with defiance of law on the part of Iranian citizenry. A full blown grassroots revolt is still far off on the horizon. Never mistake “liberalizing” in a oppressive authoritarian regime with liberal democratic governments.

This heroic woman stood up and challenged a highly protective and insular leadership that does not take kindly to public challenges outside the boundaries they have carefully constructed. Those boundaries require protestors to utilize the metaphor and language of Islam—not actions and deeds deemed to be Western influenced.

In throwing off her hijab, this young mother not only made a statement, she violated one of the tenants of Islam. This unnamed woman waved a white hijab in defiance, not a white flag in surrender. 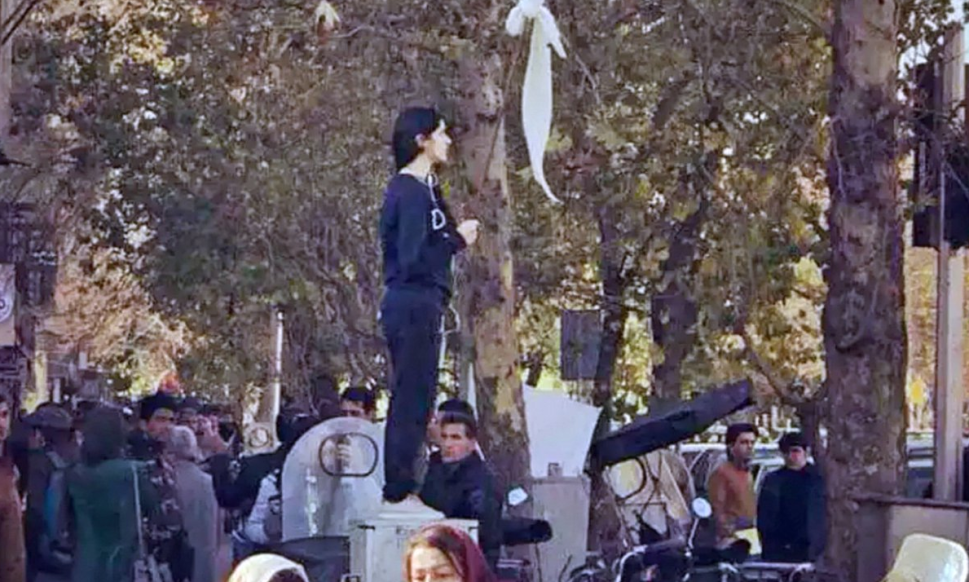