Elected officials and advocates are calling for an investigation into sexual misconduct allegations against Bronx State Senator Jeff Klein—leader of the Independent Democratic Conference (IDC), a group of breakaway Democrats—with advocates also requesting his resignation.

Erica Vladimer, 30, who worked at the New York State Senate from 2013 to 2015, told the Huffington Post that Klein “shoved his tongue” down her throat at a bar and that she subsequently stopped working for him following the alleged incident. Both Klein and Staten Island State Senator Diane Savino, also an IDC member who was dating Klein at the time, denied the incident occurred.

Vladimer said she sought advice from Manhattan State Senator Liz Krueger, a member of the Senate Democratic Conference, which a spokesman for Krueger confirmed to Observer. The spokesman also confirmed that Krueger, who previously introduced legislation to ban workplace harassment of unpaid interns in the state signed by Gov. Andrew Cuomo in 2014, has called for a swift, thorough and independent investigation.

In a statement released on Wednesday in the aftermath of the news, Cuomo called for a probe.

“Every allegation of sexual misconduct must be taken seriously,” he said. “I agree with Senator Klein and with Senator Krueger that this disturbing situation should be investigated, and I believe it should be done immediately and independently.”

When asked whether Klein should step down at an event on Long Island on Friday, Cuomo said he should not.

“Too many women are discouraged from coming forward because they fear not being believed and attacked,” Stewart-Cousins said in a statement on Thursday. “We need to confront sexual assault, harassment and inappropriate workplace behavior head-on and make it clear that it is not acceptable.”

But State Senate Majority Leader John Flanagan, a Republican, said he knows Klein as someone who is a “good and decent person” and that no formal complaint was made. He said an investigation would not be within jurisdiction of the Senate.

Flanagan’s office did not immediately respond to a request for comment on Friday.

In a letter to Michael Rosen, acting chairman of the New York State Joint Commission on Public Ethics (JCOPE) and its executive director, Seth Agata, Klein urged the commission to conduct an independent investigation into the allegation. JCOPE could not be immediately reached for comment.

At a rally hosted by True Blue New York and Empire State Indivisible—two anti-IDC groups—female activists and state Senate candidates expressed solidarity with Vladimer, calling for Klein to step down. They also blasted Cuomo’s response and said Stewart-Cousins should not have to share power with Klein.

Heather Stewart, one of the leaders of Empire State Indivisible, said they have been listening to the “truth of suffering” of many women that is “pouring out all over the world” and that as people hear it, they have to “bear witness to justice.”

“We need to bring justice to bear on those who refuse to listen,” Stewart said. “Senator Klein is refusing to listen. He impugns Erica’s character to protect his own. This is not the behavior of a leader, and he can certainly no longer remain a lawmaker. He can no longer be trusted to safeguard justice for New Yorkers. The statement from his colleagues in the IDC is also deaf to justice. They are running away from it. They prefer power and money.”

“This is exactly why we need more women in power, and we need a woman and a woman of color at that to lead our state Senate, to make sure that the appropriate actions are taken, that the appropriate bodies—in this case, which would be an independent body—to make the appropriate investigation and get to the bottom of what happened that night in 2015,” Ramos said at the rally. “We call for the investigation to be timely, to be quick and to be fair because Erica deserves to be heard and Erica deserves justice.”

She also called on Klein not to use his campaign funds to pay for his lawyers. And she said “every single thing” the IDC has done in response to the allegations “has come straight out of the Republican playbook.”

IDC members said they have “complete confidence” in Klein.

“Just as Republican elected officials offer thoughts and prayers after a school shooting but offer no action on gun control, in the same way that we see the devastation that Hurricane Maria left in Puerto Rico but Republicans take no action on climate change, we need the IDC and the rest of the state Senate to take action on this one, to stand up for women, to stand up for victims of sexual assault,” Ramos continued.

“The organizer of the rally, True Blue New York, was literally founded to end the IDC, so it’s pretty clear that calls for resignation have more to do with politics than anything else,” she said in a statement.

The labor-backed Working Families Party called the allegations “serious and credible” and requested an independent probe.

“In addition, we believe Senator Klein’s response attempting to discredit the former employee who accused him was unacceptable,” the party said in a statement. “Based on that conduct and the seriousness of the charges, the WFP calls on both the IDC and the Senate to remove him from his leadership posts until the investigation is completed.”

“I am inspired by the example set by my colleague Sen. Krueger, and I promise to support any victim of sexual harassment who works in city or state government, however I can,” Brewer said in a statement.

Bertha Lewis, founder and president of the Black Institute, an ally of the IDC, backed the group.

“It is clear that some groups are more concerned with taking down the IDC than addressing real concerns about abuse by men in power,” Lewis said in a statement. “Both Senator Klein and Ms. Vladimer have called for an investigation. Let truth, not political or agenda, rule the day.” 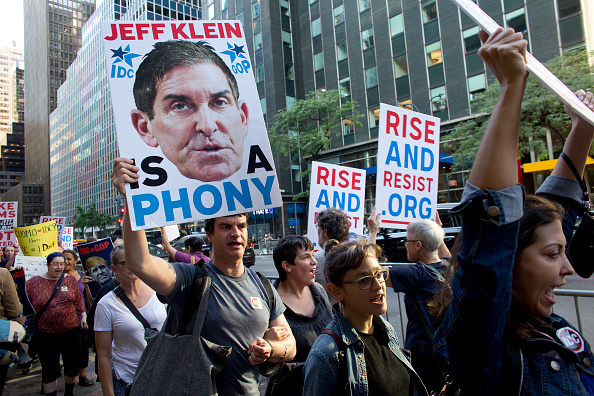