Brooklyn Councilman Jumaane Williams announced that he has formed an exploratory committee for a bid against Lieutenant Gov. Kathy Hochul.

Last week, sources told Crain’s New York that Williams, a Democrat and delegate to Sen. Bernie Sanders (I-Vt.), was preparing to announce his bid as soon as Monday.

In August, Williams said he was approached by numerous individuals asking him to consider challenging Cuomo. At the time, he did not rule it out, despite saying he was “100 percent solely focused” on running for City Council speaker.

Speaking at Salem Missionary Baptist Church in Brooklyn on Martin Luther King Jr. Day, Williams said King’s legacy is “doing what you can with what you have where you are.”

“I was excited when Salem asked me to come speak today that I thought it fitting after this speech to make sure that I announce that I’m moving forward,” he said on Monday morning. “Today, I’m announcing that I am forming an exploratory committee toward the possibility of running for lieutenant governor of the state of New York. What I’ve seen is elected officials that poke Dr. King but don’t move in his movements, that don’t have the courage of Dr. King.”

Williams has been an outspoken critic of Cuomo. The lieutenant governor has a budget of $630,000 and does not have much sway in terms of policy and powers.

Lieutenant governor and gubernatorial candidates are elected separately, but Cuomo could put his resources behind Hochul, a former congresswoman.

Williams, who is African-American and the son of Grenadian immigrants, has some advantages with name recognition in New York City, a key voting bloc in the Democratic primary. Hochul is white.

Since he was elected in 2009, Williams has emerged as one of the city’s most prominent left-leaning elected officials on issues such as police reform.

But a source of contention has been his views on social issues. He has said he is personally against same-sex marriage and abortion. He has insisted that, as speaker, he would fight for LGBTQ rights, as well as safeguarding a woman’s right to choose.

“We need people in government who will continue to push forward on progress, starting with many issues,” Williams continued. “The issue of homelessness in New York City and housing in Rochester, gun violence in Brooklyn, gun violence in Syracuse, the relief of the opioid crisis on Staten Island, the relief of the opioid crisis in Cortland. These issues are not unique to one area.”

He also spoke to the need for more diversity in government.

“When you look at who represents our government, the federal on down, the president, the vice president, the governor, the lieutenant governor, the attorney general, the mayor, the city comptroller, the speaker of the City Council, they do have one thing in common,” he added. “That lack of diversity means we are not represented in the highest halls of government in the state of New York.”

Earlier this month, he opted to travel to Albany to attend Cuomo’s State of the State Address the day of the vote for the next speaker—he was one of two candidates left in the race—and conceded in a statement.

Spokespeople for Cuomo did not immediately respond to a request for comment on Tuesday.

Williams and Upper Manhattan Councilman Ydanis Rodriguez were among protesters arrested and shoved by police officers during a rally in support of Trinidadian-American immigrant activist Ravi Ragbir, who was detained by U.S. Immigration and Customs Enforcement. A police officer was seen pushing Williams onto the front of a car as he handcuffed him, and another officer was seen putting Rodriguez in a headlock.

“I’m always amazed when people cannot connect history with what’s happening today,” Williams said. “If you don’t understand why myself and Council member Rodriguez were arrested trying to keep Ravi Ragbir from being deported, this day may not be for you… you don’t understand the protests of today, I suggest you keep Martin Luther King from out of your lips. We will not allow you to sanitize who he was.” 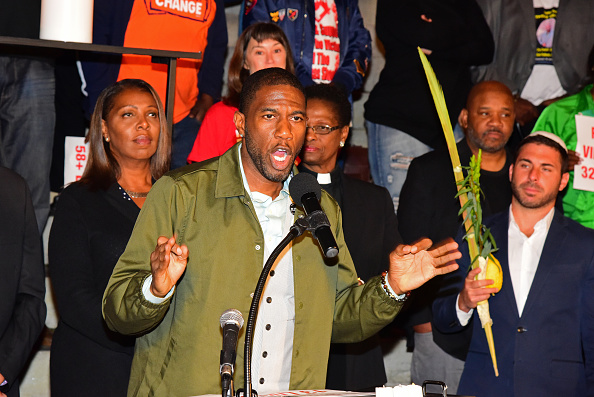