Despite being virtually unknown in his lifetime—and even now—photographer William Bullard had an incisive eye, capturing his small hometown of Worcester, Mass., in the throes of change at the turn of the 20th century.

Now, a century after his death, the Worcester Art Museum is giving Bullard his due by showcasing portraits from an archive of 5,400 glass negatives that he left behind, depicting not only white middle- to upper-class area residents, as was typical for the time in photography, but also his neighbors from the Beaver Brook enclave where he lived, many of whom were African American and Native American.

“Rediscovering an American Community of Color: The Photographs of William Bullard” reveals an unseen side of Worcester’s history, bringing it to life by connecting the subjects of many of Bullard’s photos with their descendents in Worcester and beyond.

“When I first saw these photos, I was astounded by the quality of the images that were taken by someone who was ultimately a vernacular photographer,” curator Nancy Kathryn Burns said, explaining that Bullard—whose career spanned 1897 to 1917—is believed to have been self-taught. “There’s simply no record of his association with any local photo studios or popular camera clubs at the time, even though he spent his entire life in Worcester,” which perhaps explained why his photographs remained hidden from public view for decades.

Burns learned of the photographer nearly four years ago when Frank Morrill, the owner of Bullard’s substantial archive, and Janette Thomas Greenwood, author of First Fruits of Freedom: The Migration of Former Slaves and Their Search for Equality in Worcester, Massachusetts, 1862-1900 and a history professor at Clark University, approached her with some of his prints. Burns said that it’s not uncommon for owners of inherited or found collections to approach her about the possibility of an exhibition, but generally the archives don’t offer “enough to go on” to make a cohesive, well-researched show.

What set Bullard’s collection of negatives apart, besides his facility with a camera as evidenced by the composition of the images, was his inclusion of hundreds of black and Native American residents, along with the names of many of the portraits’ subjects. According to Greenwood, the minority population of Worcester was about 1 percent of the city’s population at the turn of the century.

“There was never residential segregation per se in Worcester, but Jim Crow laws were in effect, and there was lots of racial discrimination that the community had to deal with,” she said, especially when it came to employment.

Because they were denied equal access to work, many people of color at the turn of the century didn’t have the means to have their portraits taken, despite the growing popularity and accessibility of photography among the aspiring middle class. Moreover, the racist cultural climate might have prompted many minority residents to feel “uncomfortable going to a most likely white-owned professional studio,” Greenwood said. Bullard, although white, was a long-time resident of Beaver Brook, one of the city’s most diverse neighborhoods then, and was not only known, but familiar. “He’d just come to your house and take your picture!”

Which is why Bullard’s photographs represent such an important find, according to Burns, since in terms of African American visual history, there’s little imagery to be found between the Civil War Reconstruction period and the Great Migration after the first World War. “There’s a real gap in picturing the minority American experience that needs to be filled in the early 20th century,” she said.

Including more than 80 percent of Bullard’s portraits of people of color, “Rediscovering an American Community of Color” offers a powerful and unique look at a strong community made up of recent Southern migrants, people of Native American descent, black Yankee families and immigrants from the Caribbean.

The show explores in depth the economic and cultural issues that shaped these groups, ranging from leisure and fashion trends to professional aspirations. “It’s easy to see the importance of photography to document first generations of both immigrants and, in many cases, descendants of slaves,” Burns said.

Perhaps one of the most unusual and stunning aspects of Bullard’s archive is the fastidious logbook in which he identified the names and places in nearly 1,000 of his photographs, allowing Burns, Greenwood and a team of Clark University student researchers—with the aid of local community leaders—to track down many of the subjects’ living descendants all over the country.

“We felt that it was of incredible importance to bring contemporary voices of people of color into the conversation,” said Greenwood, who said the descendants’ oral histories and personal insights into the lives of their relatives—snippets of which are included throughout the exhibition—offer intangible stories “that just can’t be found in an archive,” and that ultimately bring these rare, long-unseen portraits to fuller life.

Benetta Kuffour, the great-great-granddaughter of former slave of Bethany Veney—one of Bullard’s many subjects—said the exhibition of these photographs was not only emotional for her, but empowering.

“As an African American with descendants that go further than I can remember or was told, the Bullard Collection has encouraged me to continue with my own journey,” Kuffour said. “It isn’t often that black Americans can connect the pictures to the stories that we were told by our elders.”

Burns said that the response from the living descendants of Bullard’s subjects has not only been overwhelming, but one of the major strengths of the exhibition.

“These photographs and the connections they’ve inspired reveal how much bigger this story is than just Worcester—this is ultimately a story of America,” one that has been waiting 100 years to be told. 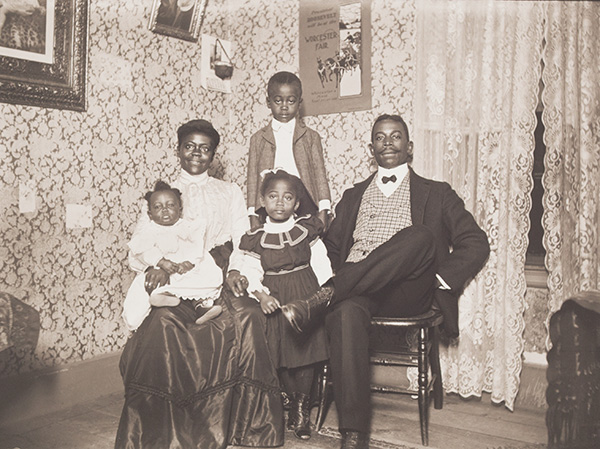