Manhattan Councilman Corey Johnson, who started campaigning more than two years ago, was elected as the next speaker of the City Council after clinching key support days before Christmas.

On Dec. 20, Johnson, 35, a Democrat and one of the frontrunners in the race, clinched support from Rep. Joseph Crowley (D-Bronx/Queens), head of the Queens Democratic Party, and Bronx Assemblyman Marcos Crespo, head of the Bronx Democratic Party. Mayor Bill de Blasio subsequently backed Johnson.

Johnson received 48 votes. Brooklyn Councilwoman Inez Barron, who jumped into the race a week before the vote, voted for herself.

Speaking on major challenges facing the city—including lack of affordability, school equality, representation of women in government, discrimination against people of color, and health inequality by zip code—Johnson urged the body to be unified.

“There has never been a more important time to ensure that our city has a strong, unified and independent Council to take on these challenges,” he said during his victory speech. “I know that with the immense talent, wisdom and experience of this body and with all of you, we will prevail. And we must defend these principles while renewing our focus on the hyperlocal issues.”

“Let us continue to use the power of this body to expand opportunity for all and to be the voice for the voiceless,” he added.

Barron, an African-American woman and a Democrat, ran because she believed it was time for a black speaker. She said all of the candidates of color agreed to drop out if they got their preferred committee despite the fact that Cornegy and Williams had not yet conceded. Williams denied that was the case.

On Dec. 29, Cornegy dropped out of the race, leaving Johnson, Williams and Barron as the remaining contenders. While Barron remained in the race until the very end, Williams—a rumored gubernatorial candidate—trekked to Albany for Gov. Andrew Cuomo’s State of the State. Staten Island Councilwoman Debi Rose was not in attendance but has endorsed Johnson.

Who Is Corey Johnson?

Elected to office in 2013, Johnson’s district includes Chelsea, Greenwich Village, Hell’s Kitchen, part of the Upper West Side, Times Square and Columbus Circle. He has chaired the Committee on Health and has discussed his challenges with substance abuse as well as alcohol and drug addiction.

His agenda as speaker includes congestion pricing for for-hire vehicles, municipal single-pay health care, and the city contributing a substantial amount of money to fix the subway system. He will also look to renew an investigative arm of the Council.

A big factor that loomed over the speaker’s race was gender and race. Johnson has said he recognizes the privilege he has as a white man but has noted he is a gay man who is HIV positive and grew up in public housing. He said he is “extremely proud” of his record of standing with communities of color, women, LGBT individuals and vulnerable communities.

In an interview with NY1—his first since he became the presumptive speaker—Johnson maintained it will be “incredibly important” that leadership positions and high profile chair positions reflect the diversity of the Council and the city.

And while he plans to work with the mayor, he insisted he will stand up to him and assert the Council’s independence when necessary. Despite the belief that City Council speakers tend to eye the mayoral position post-speakership, Johnson told NY1 he is not interested in the job.

In a statement released a little more than 20 minutes before the vote, Williams contended it is clear he will not become speaker but that he is part of a body that has many members “committed to fighting for communities that historically have been disadvantaged, to take on difficult issues” and build on the Council’s progress in the last four years.

“Most agree that there are systemic issues preventing diversity in leadership that we must confront,” he said. “I am glad that there are others, like Council Member Inez Barron, who have also dedicated their voices to this fight, and I look forward to working with them on these issues.”

He noted that after speaking with Johnson at length, he believes he is “acutely aware” of concerns about equity and has agreed to work with him on the issue both in government and citywide.

“I look forward to collaborating with Council Member Johnson in his new role on many issues, including elevating the concerns of marginalized communities and working to solve the problems that we must all face together in the next four years,” Williams continued.

Barron held a rally with her husband, Brooklyn Assemblyman Charles Barron, outside City Hall ahead of the vote.

While speaking on the floor, Barron said “it’s time for a black speaker” and referred to the late Congresswoman Shirley Chisholm—the first African-American woman elected to Congress, the first black candidate for a major party nomination and the first woman to run for the Democratic presidential nomination.

“Like Ms. Chisholm, I felt the time had come for a black speaker,” she said.

She believes she took actions “that have called for a paradigm shift” and was motivated to run when she realized “there would be a return to the structure that for so long dictated who the nominee will be.”

“When the black candidates for City Council would not commit to come to this day when the nominations and selection for speaker occur, it erased all possibility for a black speaker,” she said. “I had declined a request to run and it was not my initial intention to be a candidate.” 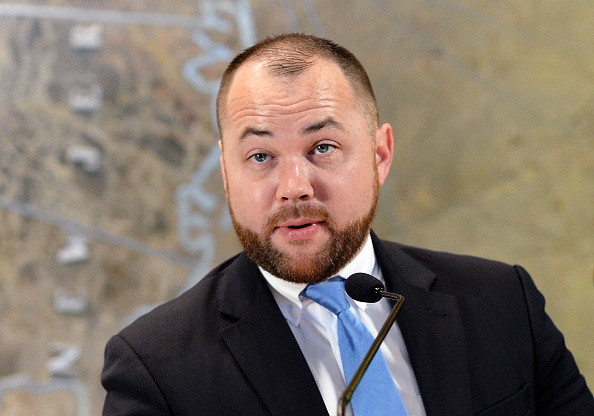