“Donald Trump needs to look at his home state, which is the only state that has a special prosecutor on special shootings to this day… we’re talking about criminal justice reform,” Sharpton said. “We’re talking about Raise the Age [of criminal responsibility]. We’re talking about New York being progressive, while he is trying to make America regressive. Trump Tower’s in the wrong state, Mr. Trump. You are out of sync with your home state.”

“It is also a national security threat to insult the continent of Africa when we have terorists that are active, ISIS and al-Qaeda, they can spread all over Africa now saying, ‘This is what Americans think of you,'” Sharpton continued.

Gillibrand, who has clashed with Trump and is rumored to be weighing a bid for president in 2020, garnered loud applause from the 200-plus-strong crowd. She described 2017 as “so divisive, so disorienting, disturbing, even demoralizing.”

She pointed to an increase in hate crimes across the state. She also acknowledged Timothy Caughman, a 66-year-old black man who was murdered by a white supremacist in Manhattan in March, and the recent death of police reform activist Erica Garner, daughter of Eric Garner, a Staten Island man killed by a white police officer in an illegal chokehold in 2014.

“Our country is better than this—even if our president isn’t,” she said.

And, quoting Ephesians in the Bible, she urged people to speak up against hate.

“How do we stand?” Gillibrand continued. “The good book tells us how to stand. We put on the belt of truth. We know right from wrong. We know truth. We must speak truth to power.”

Stewart-Cousins, who leads the mainline Democrats, also addressed the crowd and got roaring applause and cheers.

She argued the election of former President Barack Obama in 2008 made people think “we had come to a [better] place” but that the journey continues.

“I’ve always known that for every action, there is an equal and opposite reaction, and this is that reaction,” she said. “Forty-five is that reaction to what we gon’ do. We’ve been trained. We’ve been primed… this is the moment where we stand up. Yes, we put on the full armor of God. Yes, we make sure that we are clear in who we are as a nation and as a people, and we make it very, very profoundly clear that we are not going backwards.”

She outlined what she would like New York State to accomplish this year, including passing voting laws and a fairer criminal justice system.

Upper Manhattan State Senator Marisol Alcantara, a member of the Independent Democratic Conference (IDC), a group of Democrats in a power-sharing agreement with the Senate GOP, was in attendance. At one point, an attendee yelled, “No IDC!” twice.

Schumer blasted Trump’s comments about immigrants and his appointment of U.S. Attorney General Jeff Sessions, whose 1986 nomination for a federal judgeship was derailed by allegations he spoke positively of the Ku Klux Klan and called an African-American prosecutor “boy.”

Schumer also honored Ghanaian immigrant Emmanuel Mensah, a solider who died in his efforts to rescue people from the city’s worst fire in 25 years in the Bronx.

“He had a dream,” he said of King. “His dream is our unfinished business. A year ago—we’ve had a tough year—a year ago, we celebrated Dr. King’s legacy. I was here under the dark cloud of uncertainty and despair days away from the inauguration of Donald Trump.”

Cuomo noted that when he was secretary of the U.S. Department of Housing and Urban Development, he sued the KKK for housing discrimination.

He pointed to the violence stemming from a white nationalist rally in Charlottesville, Va. and Trump ending the Deferred Action for Childhood Arrivals (DACA) program for undocumented youth.

“There was a boldness and a silence at the same time,” Cuomo recalled. “You look at what is going on in Washington right now, it is the same pattern of discrimination.”

The governor also assailed his proposed border wall along the Mexican border and his recent comments about Haitian, African and El Salvadoran immigrants.

And he pointed to progress the state has made, including raising the age of criminal responsibility from 16 to 18, enacting a paid leave program and unveiling a free public college tuition plan. He also urged de Blasio to close the Rikers Island jail complex in less than 10 years.

“The silver lining to what’s going on in Washington is that people are energized and people are mobilized,” he continued.

“If you are a Haitian American, thank you for your contributions to this city and this country,” he said. “If you come from Africa, and you have come here to make us better, thank you. If you left violence in El Salvador and are now helping to make a better community here in New York City, thank you. That is what we should be saying on a day that celebrates Martin Luther King Jr.”

He noted King emphasized “over and over again” that change occurs from the grassroots—from the “bottom up, not the top down.”

“‘We Shall Overcome’ is not just a pleasant melody,” the mayor continued, referring to the Civil Rights Movement anthem. “It is an instruction to us all. It’s a living, breathing idea, and it’s a reminder that every generation’s faced this struggle.”

The mayor pointed to the movement against the overuse of stop-and-frisk policing and the Women’s March on Washington last January during Trump’s inauguration as examples on which people should dwell “when you get down.” He also referred to the victory of Sen. Doug Jones (D-Ala.) over Roy Moore, who was accused of sexually assaulting teenage girls when he was in his 30s.

“If you don’t like what’s happening in Washington, live as Dr. King lived, do it yourself,” de Blasio added.

Former Mayor David Dinkins, the city’s first and only black mayor, called for more support for young people. And ahead of the ceremony, he referred to the president as “loony tunes” when asked by NY1 political reporter Josh Robin about backlash Trump got in the wake of his comments on African, Haitian and El Salvadoran immigrants. 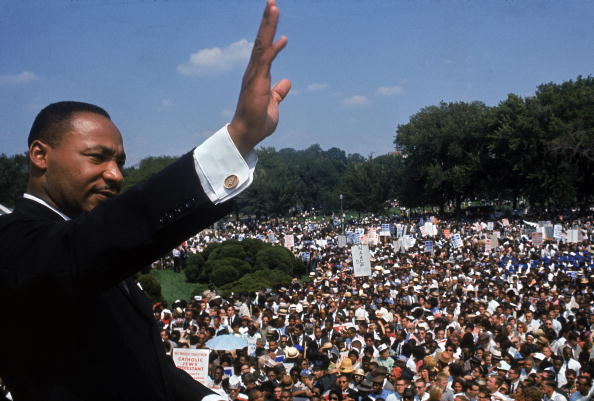