As a winter storm is set to hit New York City and other parts of the country on Thursday, the city has issued a hazardous travel advisory from late Wednesday through Thursday evening.

Snow is forecasted to start around midnight Wednesday, with the heaviest snow anticipated to come during the morning commute, according to the New York City Emergency Management Department, which announced the advisory.

Snow is expected to end Thursday evening, NYC Emergency Management said. Three to six inches of snow is forecasted, with higher amounts possible. High winds are also expected Thursday, with 15 to 25 miles per hour sustained and gusts as high as 35 to 40 miles per hour.

The National Weather Service issued a Coastal Flood Advisory in effect from 9 a.m. to noon Thursday for vulnerable locations along the shorelines of Staten Island and southern Queens.

“Though today is a bit warmer, tomorrow we are expecting snow with high winds, followed by extreme cold on Friday and Saturday,” Mayor Bill de Blasio said on his Facebook page. “If you see anyone at risk, especially those living on the street, please call 311.”

NYC Emergency Management noted cold weather can create or worsen health problems, saying certain people—including homeless people, people with disabilities, and those with access and functional needs—are at increased risk for injuries, illness or death. Others at risk, the agency explained, are people who drink heavily or use drugs and become incapacitated outdoors or those who live in homes without heat.

The agency described vulnerable groups as people who are 65 years old or older, infants, those with medical conditions such as heart or lung disease, high blood pressure and diabetes. They also pointed to people with serious mental health conditions or developmental disabilities or issues such as limited mobility or trouble leaving home.

The Emergency Operations Center will be activated on Thursday evening to coordinate the city’s response to the storm. And NYC Emergency Management is hosting daily interagency conference calls with city and state agencies as well as public and private partners.

The city’s Department of Sanitation is pre-deploying 693 salt spreaders. PlowNYC will be activated and 1,500 plows will be dispatched if more than two inches of snow accumulate. Sanitation workers will be assigned to 12-hour shifts beginning at 7 p.m. Wednesday. DSNY will assign 2,300 workers per shift.

The city issues a Code Blue Weather Emergency notice when the temperature is expected to drop to 32 degrees Fahrenheit or less between 4 p.m. and 8 a.m., including National Weather Service calculations for wind chill values. During a Code Blue, shelter is available to accommodate homeless individuals.

The storm is expected to bring snow, ice, rain and strong winds to coastal locations in southeast United States, Middle Atlantic, Northeast and into New England Wednesday into Thursday, according to the National Weather Service. 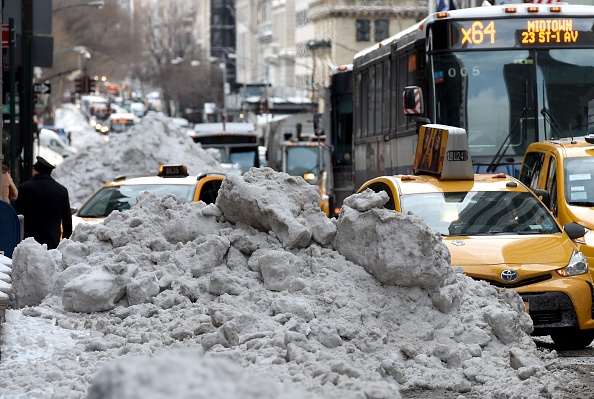