New York City announced that it will keep the Christopher Columbus statue on the Upper West Side and create a new monument to recognize Indigenous peoples.

Mayor Bill de Blasio said the Columbus statue in Columbus Circle will stay put but that the city  is taking additional steps to continue the public discourse, including placing historical markers in or around Columbus Circle, explaining Columbus’ history and the monument itself.

The city also plans to commission a new monument honoring Indigenous peoples. A location has yet to be determined.

Columbus is known for discovering the Americas while sailing for Asia but was later known for aggressive moves to colonize and oppress natives.

Last year, de Blasio set up a commission to review the city’s statues and monuments amid violence stemming from a white nationalist rally in Charlottesville, Va.

“Thousands of New Yorkers got involved in this process, and there’s been an important conversation going on across the city,” de Blasio said in a statement. “Reckoning with our collective histories is a complicated undertaking with no easy solution. Our approach will focus on adding detail and nuance to—instead of removing entirely—the representations of these histories. And we’ll be taking a hard look at who has been left out and seeing where we can add new work to ensure our public spaces reflect the diversity and values of our great city.”

The city will also relocate the statue of J. Marion Sims, a 19th century doctor who has been called the “father of modern gynecology,” to Green-Wood Cemetery and maintained it is taking several steps to inform the public of the statue’s origin and historical context, including the legacy of non-consensual medical experimentation on black women and women of color in general that Sims has come to represent.

The additional steps include adding informational plaques—both to the relocated statue and existing pedestal—commissioning new artwork with public input that touches on issues raised by Sims’ legacy and partnering with a community organization to encourage public discussions on the history of non-consensual medical experimentation on people of color, particularly women.

Concerns with the statue center on the fact that Sims experimented on African slaves without their consent, or any anesthesia, throughout his career. At a rally in August calling for the removal of Sims’ statue, former City Council Speaker Melissa Mark-Viverito had also called for the Columbus statue to be taken down.

The city will also keep the Theodore Roosevelt statue at the American Museum of Natural History and partner with the museum to provide additional context onsite through signage and educational programming, which would provide multiple interpretations of the sculpture, the artist’s intentions and the nature of the piece as part of the museum’s history. And the Department of Cultural Affairs is looking into commissioning a new artwork in the vicinity.

With respect to the Canyon of Heroes/Henry Phillipe Pétain plaque on Broadway in Lower Manhattan, de Blasio said the city will keep all markers memorializing ticker-tape parades in place and weigh opportunities to add context, such as way-finding, onsite signage and historical information about the people for whom parades were held.

The Downtown Alliance has also partnered with the Museum of the City of New York to research more detailed biographical information on the individuals with markers along Broadway and will make the information accessible through an app and web page. 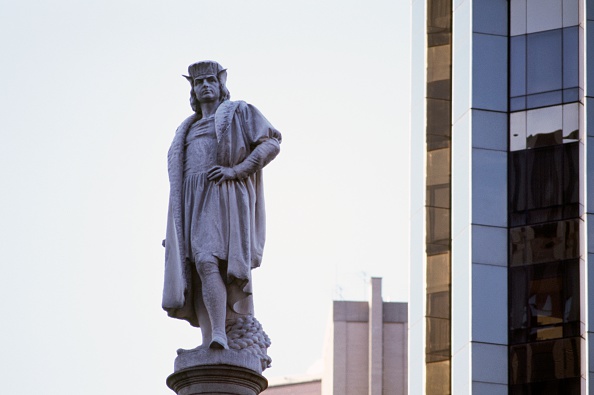