Mayor Bill de Blasio and First Lady Chirlane McCray announced that New York City is suing the United States’ largest opioid manufacturers and distributors for $500 million on the grounds that they are responsible for the city’s fatal opioid epidemic.

The lawsuit, filed in New York State Supreme Court on Tuesday, seeks to recover $500 million in current and future costs the city will incur to fight the opioid epidemic.

The manufacturers named in the suit include Big Pharma behemoth Purdue Pharma, which paid one of the largest pharmaceutical fines ever in 2007 for mislabeling its product OxyContin, Teva Pharmaceuticals, Johnson & Johnson and Watson Laboratories, among others. Three distributors are also named in the suit.

“While we’re trying here in this city to find solutions and so many other cities and towns and counties around the country are trying to do the same, who’s getting away with bloody murder right now?” the mayor asked. “The big pharmaceutical companies. That’s what’s really going on. The people who created the crisis are getting away with it. They are not only not paying for what they have done, they’re continuing to do what they started. They haven’t changed.”

The announcement marks the second time this month that the city has filed a lawsuit against big corporations to tackle public health and environmental issues. Earlier this month, the city announced a lawsuit against five of the country’s biggest oil companies, arguing they have contributed to global warming.

De Blasio said the big pharmaceutical companies raked in billions of dollars and profit, while ignoring scientific evidence that made it clear that their products were lethal.

He pointed to statistics from the Centers for Disease Control and Prevention (CDC) indicating that prescription opioid sales quadrupled from 1999 to 2014. And at the peak point in 2012, there were 282 million prescriptions written for opioids in the United States—enough for every adult American to have their own bottle of pills.

The city, de Blasio said, is spending more than $500 million a year to address the epidemic.

“Those that created the problem have to feel the consequences and have to change their ways and have to finally help address the damage they have done,” he continued.

Manufacturers, the de Blasio administration argued, worked to create a false notion that using opioids to treat chronic pain was safe for most patients and that the drugs’ benefits supersede the risks.

The city pointed to what it described as a deceptive promotion and marketing campaign that included unbranded messaging to avoid extensive regulatory framework governing branded communications—communications, the city noted, began in the late 1990s, became more aggressive around 2006 and continue in the present day.

The administration said distributor defendants have the tools to track suspiciously large surges in opioid demand and that they have failed to use those tools to warn public officials about suspicious orders—which they are legally required to do—or to curb the oversupply of opioid pills.

In 2016, more than 1,000 people in the city died in a drug overdose which involved an opioid—the highest year-to-date rate, according to the administration. More New Yorkers died from opioid overdoses last year than from car accidents and homicides combined.

Last year, the city launched HealingNYC, a $38 million initiative to tackle the epidemic.

McCray—who spearheads the city’s ThriveNYC mental health initiative—said that this year, the city is on track to distribute 100,000 naloxone kits. Naloxone is an overdose antidote.

“They have families and friends… they have goals and dreams,” she said. “When we lose them, the people they leave behind are never the same. Our communities are never the same. And when we throw the label ‘addict’ on a person, we strip them of their humanity with that word.”

Dr. Herminia Palacio, the city’s Deputy Mayor for Health and Human Services, said overdose deaths in the city jumped 17 percent from 2014 to 2015 and then 50 percent from 2015 to 2016, with fentanyl involved in nearly half of those deaths.

But she argued that last year, the city saw “that first glimmer of hope.”

“From 2016 to 2017, we expect a flattening of that curve, not another spike,” Palacio said. “We expect the number of overdose deaths to be roughly even year over year. That’s good news, but we have so much work to do. And fortunately, we have many tools at our disposal. We have effective treatments. We have policy. We have people lifting their voices, and we have data to guide us.”

The Health Department said that while drug overdose deaths affect every neighborhood and demographic in the city, residents of impoverished areas are hit the hardest. And roughly 2.7 million opioid prescriptions were filled within the city each year between 2014 and 2016.

Ann Marie Perrotto, a Staten Island woman whose 22-year-old son Christopher died of an overdose, said her son went from taking to one to two pills a day to 25 to 30 pills a day.

“I’m going to be really blunt: the pharmaceutical companies killed my son, and it’s about damn time we started holding them accountable,” Perrotto said. 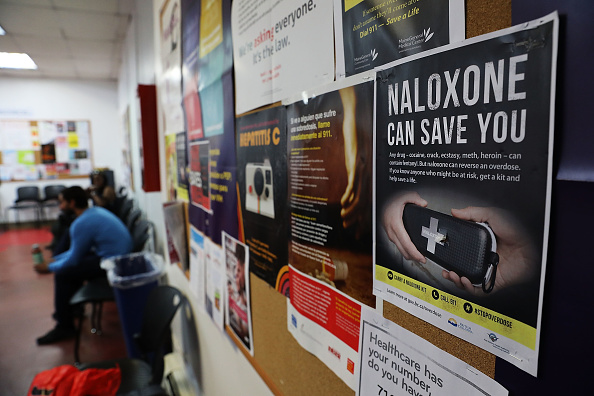