Gov. Andrew Cuomo is looking to expand his free public college tuition plan to include undocumented students who came to the United States in their early childhood.

Cuomo’s fiscal year 2019 executive budget—which is $168 billion—includes legislation to launch the DREAM Act, which will give undocumented students access to his “Excelsior Scholarship” program, which provides free tuition to full-time State University of New York and City University of New York students from households earning up to $125,000, according to the state’s budget briefing book.

The legislation will also give undocumented students access to the New York State Tuition Assistance Program, which finances tuition at approved schools in the state, along with other state-run scholarships.

“Since 2002, undocumented students qualify for in-state tuition at SUNY and CUNY if they graduated from a New York high school or received a GED in the state,” the book states. “Yet, each year, many talented students who graduate from New York high schools remain unable to fulfill their potential simply because they cannot afford the tuition and lack access to tuition assistance to help pay for school.”

The New York Post first reported on the provision in the budget.

The state is launching the second phase of the program, which expands the income eligibility threshold for the 2018-2019 academic year to include New Yorkers with household incomes of up to $110,000.

There are roughly 42,000 DACA recipients in New York State, according to Cuomo. And the city projects that 470,000 New Yorkers will benefit directly or indirectly from a bipartisan DREAM Act.

On Monday, the governor said DACA recipients will remain eligible for state-funded Medicaid if Congress does not come up with a solution to protect Dreamers.

On Wednesday, Trump indicated that there would be a pathway to citizenship for DACA recipients, saying that it will occur “at some point in the future.” 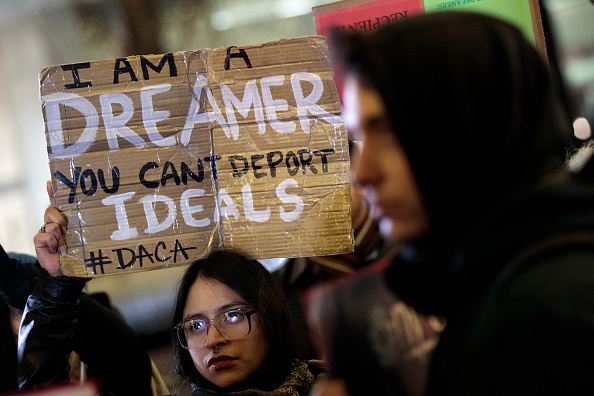