Cuomo issued the state of emergency throughout the city, Long Island and Westchester. He also issued a travel advisory from 9 a.m. to 4 p.m. Thursday, noting the worst weather will occur from 9 a.m. to 2 p.m.

The coastal system is expected to bring six to 10 inches of snow to the city; four to eight inches to Nassau County; nine to 12 inches to Suffolk County; and four to eight inches to Westchester County, according to Cuomo. The system will create blizzard conditions that could result in blowing snow and whiteouts on roadways, with coastal flooding possible and overnight drops, he added.

“As everybody knows we have a snowstorm,” the governor told reporters on Thursday morning. “But it’s a snowstorm plus, let’s call it, and we’re going to be declaring a state of emergency because the situation has continued to deteriorate.”

Cuomo said the state can handle snow but the combination of the snow and the wind “is going to cause the trouble today.” He pointed out the wind will be high all day, at 25 to 35 miles per hour and with gusts of up to 60 miles per hour.

“Those are significant wind gusts,” he continued. “Again primarily on Long Island but some in New York City. Worse as you go east, so Queens will be worse than Manhattan. Suffolk worse than Nassau.”

De Blasio said a Winter Storm Warning will remain in effect for the city until 1 a.m. Friday. On Wednesday, the city issued a hazardous travel advisory.

“This is a very serious storm,” he said. “This is a tough situation in this city. I was just out in Queens, in Corona, looking at the operations by the Sanitation Department.”

But flights in and out of LaGuardia and John F. Kennedy airports are cancelled, and 1,400 New York City Housing Authority apartments are without heat. The mayor maintained the city will directly intervene if people are having heat problems.

Public schools, which de Blasio closed on Thursday, will reopen on Friday given that the storm is expected to abate in the next few hours. But all yellow bus field trips will be cancelled. Alternate side parking is also cancelled on Thursday, Friday and Saturday.

The mayor added the there will be a lot of ice on the streets and urged people to stay inside and not go outside if they do not need to, asking them to use mass transit. 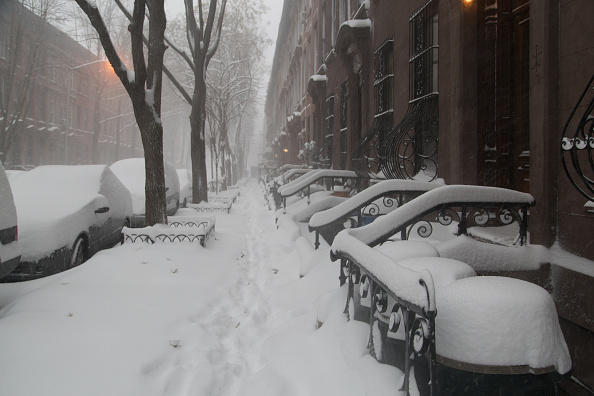