President Donald Trump and U.S. Ambassador to the United Nations Nikki Haley have a complicated relationship.

When Trump called for “a total and complete shutdown” of Muslims entering the country on the campaign trail, Haley castigated the proposal as “absolutely un-American” and “unconstitutional.” During the Republican rebuttal to Obama’s final State of the Union, the former governor alluded to Trump’s rhetoric as “the siren call of the angriest voices.”

“The people of South Carolina are embarrassed by Nikki Haley” Trump shot back over Twitter.

Haley was even suspected to run against Trump as a female alternative to Hillary Clinton. But after besting Haley’s preferred candidate, Senator Marco Rubio (R-Fla.) by 10 points, the candidate courted a reluctant endorsement in time for the 2016 Republican National Convention in Ohio. A week after the election, Haley flew to New York to meet with the president-elect, and was later offered the role of U.N. ambassador by transition officials.

“This has felt like a big crash course, but I love it,” Haley told Politico on Thursday. “I am a fast learner and especially when it’s something I love, I soak it all in.”

At the U.N., Haley has pulled off a balancing act of adhering to the White House’s ‘America First’ platform, staking her own voice and brandishing her credentials for an anticipated presidential run after the Trump administration. While the ambassador has emerged as a nationalist hardliner willing to cut U.N. funding and attack world leaders, she has also been willing to challenge the president, especially on women’s issues.

When asked about the 16 allegations of sexual misconduct circling Trump, the ambassador doubled down on her support for women.

“Women who accuse anyone should be heard. They should be heard, and they should be dealt with,” said Haley in a December interview on CBS’ Face the Nation. “And I think we heard from them before the election. And I think any woman who has felt violated or felt mistreated in any way, they have every right to speak up.”

The comments reportedly infuriated the president, according to AP News. Sources at the State Department later confirmed to Vanity Fair that the ambassador was positioning herself as a strong voice on women’s issues while distancing herself from the White House.

In recent weeks, Haley has come under scrutiny—not for nationalist policy, but for rumors that she may be having an affair with the president. After reporter Michael Wolff teased the possibility on Real Time With Bill Maher last Friday, the ambassador has been forced to defend her character.

“So the idea that these things come out, that’s a problem,” added the ambassador. “But it goes to a bigger issue that we need to always be conscious of: At every point in my life, I’ve noticed that if you speak your mind and you’re strong about it and you say what you believe, there is a small percentage of people that resent that and the way they deal with it is to try and throw arrows, lies or not.” 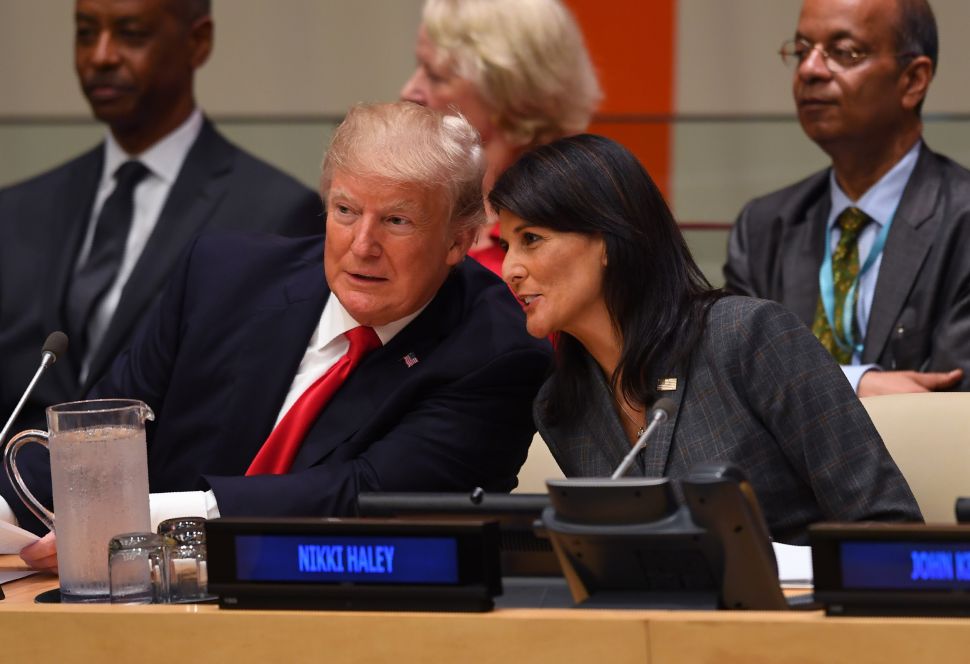