While reporting to U.S. Immigration and Customs Enforcement for a routine check-in at 26 Federal Plaza, Ragbir, executive director of the New Sanctuary Coalition of NYC—an interfaith organization that helps undocumented immigrants fight detention and deportation— was detained on Thursday morning.

The NYPD arrested 18 people outside of the building, including Councilmen Williams and Rodriguez, according to BuzzFeed. The NYPD did not confirm the arrests to Observer.

“We were suddenly—many of us suddenly and without warning or provocation shoved and pushed,” Johnson said in a meeting following the Council’s monthly stated meeting on Thursday afternoon. “Two of my colleagues, as I mentioned upstairs, Ydanis Rodriguez and Jumaane Williams, were arrested.”

Rodriguez blasted police for mistreating him.

This is NOT how you treat people who are protesting for Human Rights. This is NOT what democracy looks like. We can’t call ourselves progressives and pro-immigrants when the @NYPDnews is doing chokehold to us. Injusticia! @NYCMayorsOffice @DHSgov @ICEgov #ImmigrationReform pic.twitter.com/5Y9cRToA3C

The speaker did not know the nature of the charges but saw members and other individuals mistreated by officers. He also said the officer who shoved him ran away after figuring out who he was.

He argued people have the right to protest and pledged resistance to President Donald Trump’s aggressive immigration enforcement agenda.

“The right to peacefully protest is a cornerstone of democracy and in these uncertain times, we are facing unprecedented attacks on our immigrant community from the White House,” he added. “We will not be intimidated.”

He also said ICE officials shoved people to the ground and that it “lasted a while.” He told reporters that Police Commissioner James O’Neill told him the NYPD is assessing video footage and figuring out which officers were involved. And he called on the NYPD to release body camera footage of the protest if it exists.

Rachael Long Yow, a spokeswoman for ICE, told Observer that ICE officers were not with the protesters and that only Federal Protective Service and NYPD were present.

In a video taken by NY1 Manhattan reporter Michael Scotto and photographer Izzy Fleming, Johnson and Rodriguez are seen approaching cops near the ambulance truck and shouting “Ravi!” along with other protesters. The police officer starts shoving Johnson and telling him to “back up!” In response, Johnson asks, “Officer, who’s your commanding officer?”

Officers are seen grabbing Williams, handcuffing him and slamming him onto the front of a car. In another video taken by BuzzFeed, Williams is heard yelling, “Freedom, resist. Freedom, resist. We are going to resist.”

The Mayor’s been briefed on the protest and police activity along Broadway in Lower Manhattan. The area is covered extensively by cameras and we’ll be reviewing the footage to get to the bottom of what happened.

He declined to comment further when asked by Observer for an update.

Sergeant Jessica McRorie, an NYPD spokeswoman, said there is “extensive video” of the incident and that it is being reviewed.

“At this point, it appears the police were clearing a path for an ambulance with a patient inside that was en route to a hospital,” McRorie said in a statement. “The NYPD was attempting to clear a path for that ambulance, which was purposely and repeatedly being blocked.”

He received a stay-of-removal in 2011 and has since been subject to prosecutorial discretion, which allows an agency or officer to figure out how to handle individual cases on a yearly basis—and which prevented his expulsion again in March. At the time, his lawyer, Alina Das, said Ragbir would have to go back in a month to try to secure a travel document.

His stay of removal was in effect until next week, according to New Sanctuary Coalition NYC.

In a statement, Yow said over the last 12 years, Ragbir’s immigration case has undergone extensive judicial review at multiple levels of the country’s judicial system.

“He has since exhausted his petitions and appeals through the immigration courts, the Board of Immigration Appeals and the U.S. District Court,” Yow said in a statement. “He will remain in custody pending removal to Trinidad.”

“A longtime New Yorker, a husband and a father, Ravi is beloved by all of us who have had the privilege of working with him to make New York a welcoming community for all of its residents,” Dousa said in a statement. “The fact that ICE has taken him as if his spirit, family ties and contributions to the community mean nothing is inhumane.” 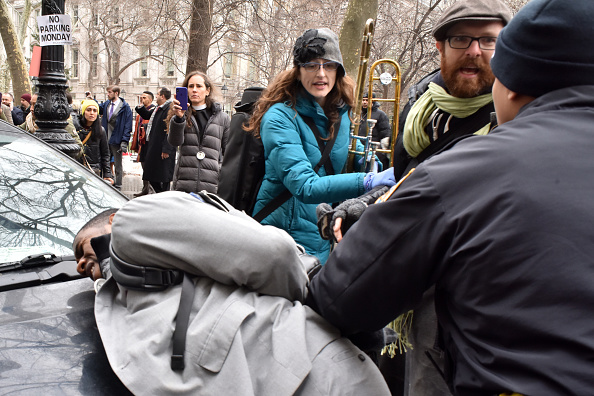