What’s really astonishing, though, is that season after season, Prototype introduces to New York pieces that shift the whole paradigm of what opera is and can be. In recent years, Breaking the Waves, Dog Days, and The Scarlet Ibis have left me not only emotionally shattered (which is, after all, part of opera’s job description) but also wandering around for days after pondering “why hasn’t someone done this before? It just seems so inevitable!”

But walking in the door expecting transcendence is asking for disappointment. I was prepared for Prototype’s centerpiece production of 2018, Gregory Spears’ Fellow Travelers, to tear my heart out, as his Paul’s Case did four years ago. But the opera, a furtive gay love tragedy set against the backdrop of McCarthy era Washington, impressed only with its expert craftsmanship.

Spears’ distinctively shiny music is most friendly to the ear, a shimmering soundscape of chattering woodwinds and frolicking string figures festooned with darting, melismatic vocal lines. Every page feels like the first day of spring, an effect that beautifully supports this tale of a budding romance between aspiring writers Timothy Laughlin and dashing State Department official Hawkins Fuller.

Unfortunately, in Greg Pierce’s libretto, as in the novel by Thomas Mallon upon which it is based, gay guys get about as much chance at happiness as French courtesans did in 19th century Italian opera. Timothy, presented as a Mary Sue of infinite sweetness, forbearance and generosity, is continually set upon by the proverbial bloodhounds snapping at his rear end. Meanwhile, voluptuous louse Hawkins runs the gamut of melodramatic clichés you’d expect in a novel featuring a character named “Hawkins Fuller.” (“Oh, yes, Dominique Francon introduced us at Ellsworth Toohey’s cocktail soirée!”)

The leading men are both terrific. Aaron Blake’s tangy tenor and spot-on body language jolted the fragile, closeted Timothy to vibrant life. The only way I could be more impressed is if I had not seen him give essentially the identical performance in Angels in America last summer. Baritone Joseph Lattanzi hit precisely the right louche note with his smirk and light, lithe voice, and, whatever his sexual orientation, he convinced utterly as a top man in the first act’s sex scene.

Devon Guthrie’s bright, soaring soprano felt wasted in a role that seems to have wandered in from another opera, perhaps one that included the political content stage director Kevin Newbury was determined to force down this show’s throat. George Manahan conducted with the lackluster competence familiar from his many forgettable years at New York City Opera.

If a hackneyed plot hobbled Travelers, a startling science fiction conceit kickstarted the gripping one-act The Echo Drift. In this world premiere work, an inmate in a futuristic prison gets a visit from a talking moth that tries to persuade her than she can escape by rejecting her conventional sense of time and space.

Everything about this presentation was virtuoso, from the psychedelic snarls and slithers in composer Mikael Karlsson’s orchestra writing to the sly, ironic whispers of actor John Kelly as the Moth. But the heart of the piece was the bravura singing of Blythe Gaissert as the panicky prisoner, her smoky mezzo biting into the wide-ranging and relentless vocal part with the violent abandon of a starving shark.

The other breakthrough singer of the festival thus far is Mikaela Bennett, a musical theater artist who embodied the title role of Michael Gordon’s Acquanetta, a fantasia on the career of the camp 1940s horror film diva. Taking a cue from the real Acquanetta’s best-known film Captive Wild Woman, which centers on a horrific act of transformation (ape into femme fatale), Deborah Artman’s libretto ponders how the actress’s persona and very existence were manipulated and fictionalized.

As the obsessive ostinatos of Gordon’s score seem to stretch out an instant of time—the setup for Acquanetta’s first scene in the movie—into infinity, Daniel Fish’s staging brutally mediates Bennett’s performance. We see her only as a video projection of a mercilessly invasive black and white close-up lengthy enough to give Greta Garbo a panic attack.

And yet the camera adores Bennett’s face, whether in wary semi-repose or in laughing triumph at the very end of the piece, when the mysterious cubic structure at the back of the stage opened up to reveal the real performer and the crew filming her. At that point, the image on-screen burst into lifelike full color and Bennett enlivened her voice with a quicksilver vibrato. That cathartic finale sent me staggering out of the theater wondering whether we can ever know who is manipulating whom. 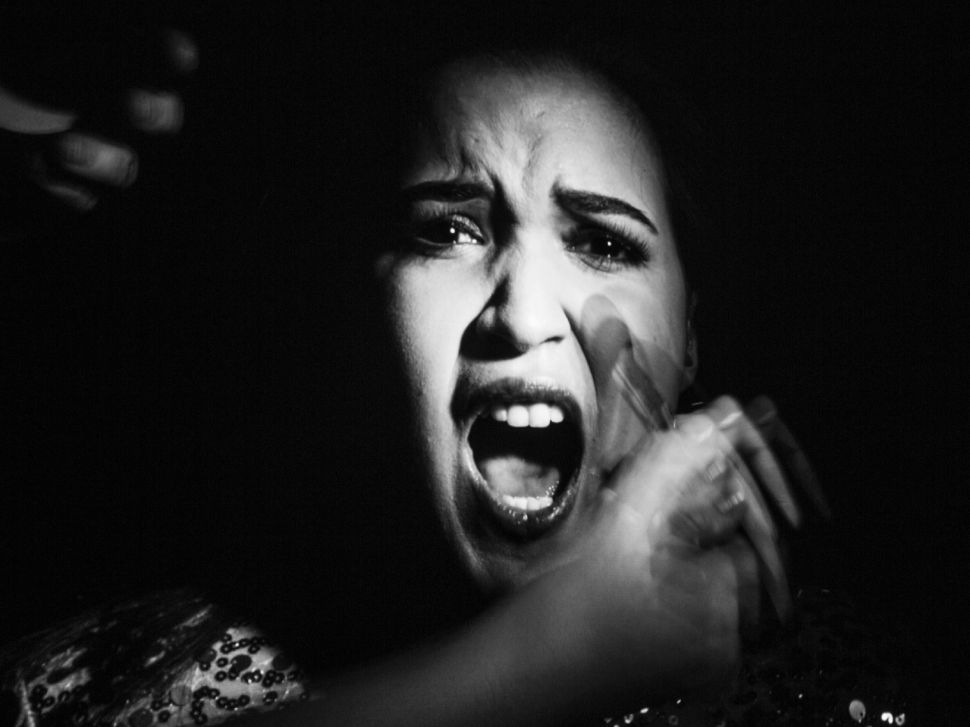