The original celebutante is getting married and she has an enormous rock to prove it.

Former reality star and current beauty mogul Paris Hilton is officially engaged to Chris Zylka. If Zylka has a familiar face, you’ve probably seen the actor on television—perhaps you caught him in The Leftovers. But maybe you know him from the made-for-TV movie My Super Psycho Sweet 16 (he appeared in volumes one through three), or in the short-lived TV version of early aughts rom-com 10 Things I Hate About You, where he played Joey Donner.

He also had blink and you’ll miss it parts on the poorly named Cougar Town, the 90210 reboot and Hannah Montana. Or you could recognize him from his movie career, which includes the classic Piranha 3DD (worthy of a 14 percent on Rotten Tomatoes) or his first film, The People I’ve Slept With (it earned a more respectable 27 percent), where he played “Mr. Hottie.”

This isn’t the first engagement for Hilton or Zylka. Zyla was previously engaged to influencer Hanna Beth Merjos in April 2014, but they called it quits the next year with an epic Twitter feud. If Hanna Beth looks familiar, it’s because she was a former MySpace scene queen. She was best friends with a post-rehab Demi Lovato and dated a Warped Tour-worthy roster of boys in bands, including Miley Cyrus’s brother Trace, Boys Like Girls frontman Martin Johnson and Avril Lavigne’s ex-husband, Deryck Whibley, of Sum 41.

When they broke up, Zylka attacked his former fiance online, without help from Merriam-Webster. “When someone’s boyfriend shows up at they’re house with flowers while you’re in that someone’s bed. Don’t get involved with them,” he subtweeted. He then took the fight to Instagram, writing, ““Im disappointed that i didnt see how fake you were, or pay attention to the backstabbing you did in front of me. I will rise up.” Hanna Beth responded on Twitter with a Pinterest-worthy sentiment: “Hate gets you nowhere.”

Hilton was previously engaged to Greek shipping heir Paris Latsis, who she met at a nightclub in Monaco when they were both teens. Paris and Paris were engaged in 2005, long before Zylka’s engagement. But now, Hilton and Zylka are set to tie the knot after an Aspen proposal, complete with a 20-carat pear shaped diamond on a platinum band, said to be worth between two and four million dollars.

“I said Yas! Thank you for showing me that fairytales do exist,” the international DJ exclaimed on Instagram with a set of emojis. Hopefully, her wedding gown will be worthy of a fairytale, since Zylka already has her name tattooed on his arm in the Disney font. 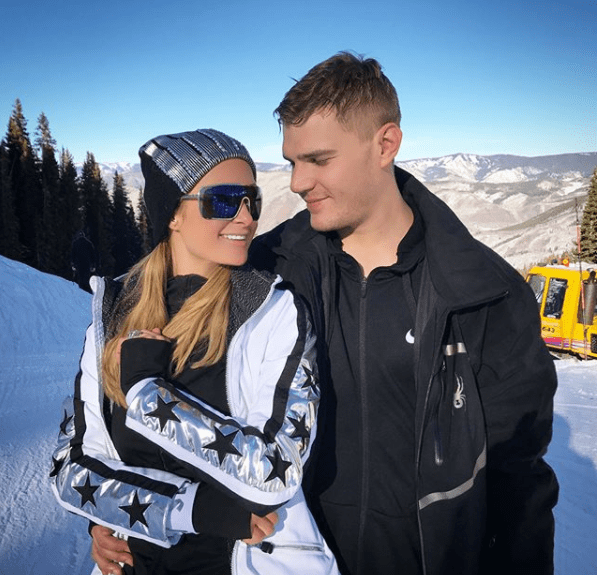