Looking at the political landscape in the United States today, the opening lines of the 1967 Buffalo Springfield protest anthem “For What It’s Worth” come to mind: “There’s something happening here, and what it is ain’t exactly clear … ”

The impending Democratic wave in the 2018 midterms feels almost palpable. Perhaps you may not believe in polls, a reasonable position after the massive polling failures in recent elections, but what cannot be denied is the results of the special elections and off-year elections of the past year. Democrats have been massively over-performing their baseline numbers in elections across America, in places both likely and quite unlikely.

In the leftward-moving but still swingy state of Virginia, Team Blue won the governorship last November in a nine-point landslide that far outpaced its tenuous polling lead and picked up almost enough seats in the House of Delegates to wipe out a crushing 66-34 GOP majority. Republicans needed to win a blind draw in a tied race to pull out a 51-49 edge in the chamber.

Democrats lost all four special elections to fill vacant U.S. House seats in 2017, they but outperformed their normal vote shares in those heavily Republican districts by significant margins. Democrats picked up legislative seats all over the country, and most notably, four state legislative seats in Oklahoma, a state so dominated by Republicans that it was the only state in America where Barack Obama didn’t win a single county in either of his two elections. If Democrats are picking up seats in Oklahoma, Republicans should be sweating.

Then, of course, there was the special election in Alabama, where Doug Jones became the first Democrat to win a U.S. Senate seat since 1992. Yes, Jones benefitted from the allegations that his Republican opponent, Roy Moore, made sexual advances toward teenagers while well into adulthood, but Jones was polling much closer against Moore than a Democrat could normally expect in Alabama even before the allegations against Moore came out.

To some degree, none of this should be too much of a surprise. For most of the nation’s history, the party that wins the presidency typically has struggled during the midterm elections two years later. Since the Civil War, which concluded in 1865, the sitting president’s party has picked up seats in a midterm election on only three occasions: 1934, 1998 and 2002. In all three cases, the incumbent president was exceedingly popular. In 2002, barely a year removed from the 9/11 terrorist attacks, George W. Bush’s approval ratings averaged 67 percent the month before the midterms. In 1998, facing an unpopular and politically motivated impeachment by his Republican foes, Bill Clinton was at 65 percent. And although nobody was polling on presidential approval in 1934, at that time, Franklin Roosevelt was largely viewed as a national hero for his efforts to curb the effects of the Great Depression.

Those were the exceptions. In six dozen other midterm elections since 1866, the president’s party has suffered a net loss of seats in Congress. Some were close, such as in 1962, when President John F. Kennedy’s Democrats lost four House seats but gained three Senate seats. This was probably in no small part because Kennedy, judging by the numbers, was the most popular president since pollsters began measuring approval ratings in the 1940s. In other cases, the president’s party has lost a lot, such as the 63 House seats and six Senate seats lost by Democrats in 2010. But when the president is below 50 percent approval ratings, on average, his party loses nearly 40 seats in the House of Representatives at the midterms. And typically, those losses are foreshadowed by special election and off-year election underperformance in the preceding year, which is what we saw for the entirety of 2017.

So on one level, there doesn’t seem to be any news here. Donald Trump is well below 50 percent, and his party is getting clobbered in the lead-up to the midterms.

And yet, what’s interesting and potentially portentous is the continued widening of the gender gap. A Washington Post poll released Jan. 22 shows women favoring Democrats in the upcoming midterms by a staggering 57 percent-31 percent spread, powering Team Blue to a massive 51 percent-39 percent lead, which is right at the midpoint of recent polls showing Democrats with anything from a 5 percent-18 percent advantage. (Crucially, Democrats also hold a 15 percent advantage among voters who describe themselves as “absolutely certain” to vote, a factor that indicates that the Democratic wave is likely to be larger, not smaller, than the midpoint of the generic polling numbers.) And white women, who supported Trump by about nine percent in 2016, now favor Democrats in the midterms by about 12 percent. Quite clearly, that means women of color are favoring Democrats by even more punishing margins.

What is driving these numbers is, of course, impossible to state definitively, but two important things have happened since Trump ascended to the presidency a year ago: the women’s march movement and the #MeToo movement. Are we facing a moment, as we did in 1992, known as “The Year of the Woman,” in which women have simply gotten fed up and are willing to take their frustrations out at the polling place?

In 1992, the backdrop to the women’s polling-place rebellion was the Senate hearings on Clarence Thomas, who was eventually confirmed as a Supreme Court justice on a narrow vote after allegations of sexual harassment made by law professor Anita Hill. Hill’s allegations, and the belief by many at the time that she was not given a fair hearing by the male-dominated Senate Judiciary Committee, helped fuel the election of what was then the largest number of women ever voted into Congress. Female candidates who were never given much thought found themselves winning office. Most notable among them was Carol Moseley Braun (D-Ill.), a virtual unknown who stunned incumbent Senator Alan Dixon and multimillionaire attorney Al Hofeld in the Democratic primary, then easily bested a Republican foe in November to become the first black woman elected to the U.S. Senate.

Just as the 1992 ballot-box uprising was fueled by a female backlash against powerful men they perceived as villains, a similar occurrence in 2018 needs a foil. Who could be a more perfect foil for women, at this point in time, than Trump? His shockingly disrespectful comments about his treatment of women that emerged during the 2016 election campaign were problematic enough, but now, add to the equation the allegation that he allegedly cheated on his pregnant third wife with a pornographic actress, then paid his former mistress $130,000 for her silence during the campaign. At a time when the culture is turning in a very serious way against men who mistreat or disrespect women, who symbolizes the culture of powerful male predators more than Trump?

The second round of women’s marches that took place on January 20, 2018 contained a vital component that wasn’t as much in evidence in the first round a year before. At this year’s women’s marches, organizers and speakers very pointedly and eloquently spoke of the necessity of voting as a tool for political and social change. A new movement, Power to the Polls, is springing up to mobilize women to vote in the upcoming midterms.

If the polling we are seeing is correct, women are leading the charge against Trump and his party in a big way, and they could turn a Democratic wave into a tsunami. Time will tell, but as we saw in 1992, when women get fed up, they can become a political force. Listen closely, and you may hear them roar.

Cliston Brown is a communications executive and political analyst in the San Francisco Bay Area who previously served as director of communications to a longtime Democratic Representative in Washington, D.C. Read his full bio here. 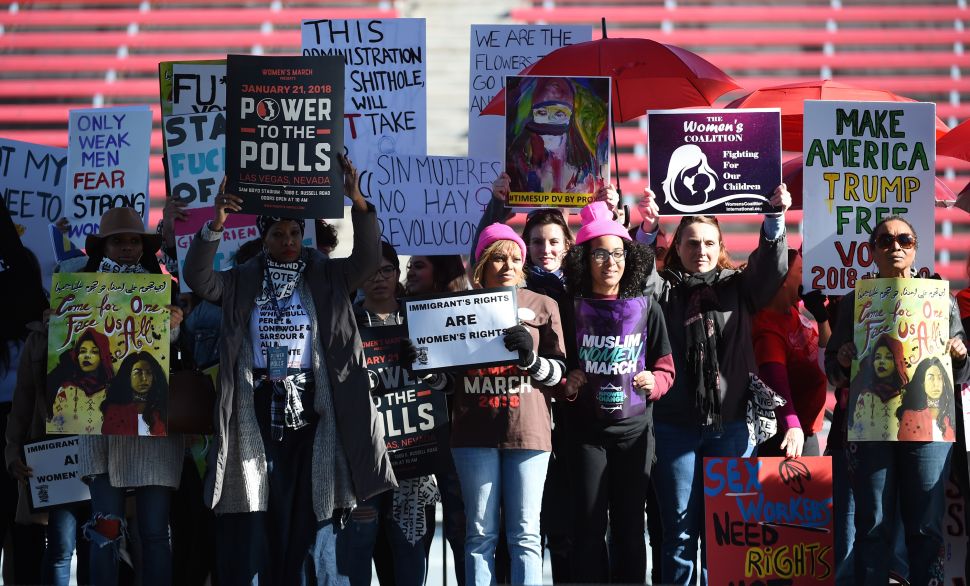