Who knew the best solution to the fake news epidemic would come from Vatican City?

Yes, this week, Pope Francis put on his media critic hat. He released an address on “fake news and journalism for peace” to mark World Communications Day.

The pontiff actually put fake news in a biblical context, writing that it was first used by the serpent that convinced Eve to eat the forbidden fruit in the Garden of Eden.

Humans no longer live in gardens wearing fig leaves, but Francis warned that we’re still subject to “‘snake-tactics’ used by those who disguise themselves in order to strike at any time and place.”

In non-biblical terms, those “snake-tactics” are fake news stories, which Francis defined as “false information based on non-existent or distorted data meant to deceive and manipulate the reader.”

That definition is pretty spot-on—especially coming from an 81-year-old man who, by his own admission, hasn’t watched TV since 1990.

Francis goes on to explain that fake news “grasps people’s attention by appealing to stereotypes and common social prejudices.” It also exploits “instantaneous emotions like society, contempt, anger and frustration.”

According to Francis, fake news has this power because it spreads like wildfire on social media. The pope isn’t opposed to social networks—he tweets frequently, and he’s even subtly subtweeted President Donald Trump.

But in the letter, he objects to “manipulative use” of the social networks. As untrue stories go viral, they can affect election results and even lead to violence. Many people believe fake news when they see it because it looks trustworthy, which leads to a feedback loop where they continue defending the fake story even when presented with evidence that it’s false.

“Fake news is a sign of intolerant and hypersensitive attitudes, and leads only to the spread of arrogance and hatred,” Francis wrote.

It may seem surprising that Pope Francis is such a cogent media critic, but he knows the harm of fake news from experience.

Throughout the 2016 presidential campaign, news stories claiming Francis had endorsed Trump, Bernie Sanders or Hillary Clinton spread like wildfire on Facebook. The problem (as Snopes pointed out) was that none of them were true.

All is not lost, however: Francis praised international media literacy programs that are teaching people how to spot fake news and government initiatives that are trying to stop its spread.

For example, the European Commission recently convened a 39-member expert working group to combat fake news in the European Union. According to Poynter, there have been similar calls for reform in France, Germany, Italy and the United Kingdom.

Individual journalists also have a responsibility, however, because, according to Francis, they are “the protectors of news.” As such, they must ensure the accuracy of their reporting.

“In today’s world, theirs is, in every sense, not just a job; it is a mission,” Francis wrote. “Amid feeding frenzies and the mad rush for a scoop, they must remember that the heart of information is not the speed with which it is reported or its audience impact.”

Instead, reporters should focus on “a journalism of peace” because “the truth will set them free.”

“By that, I do not mean the saccharine kind of journalism that refuses to acknowledge the existence of serious problems or smacks of sentimentalism,” Francis wrote. “On the contrary, I mean a journalism that is truthful and opposed to falsehoods, rhetorical slogans and sensational headlines. A journalism created by people for people, one that is at the service of all, especially those–and they are the majority in our world–who have no voice. A journalism less concentrated on breaking news than on exploring the underlying causes of conflicts in order to promote deeper understanding.”

Pope Francis’ “editor” may not be someone you can email or tweet, but it looks like he’s definitely steering him in the right direction on media issues. 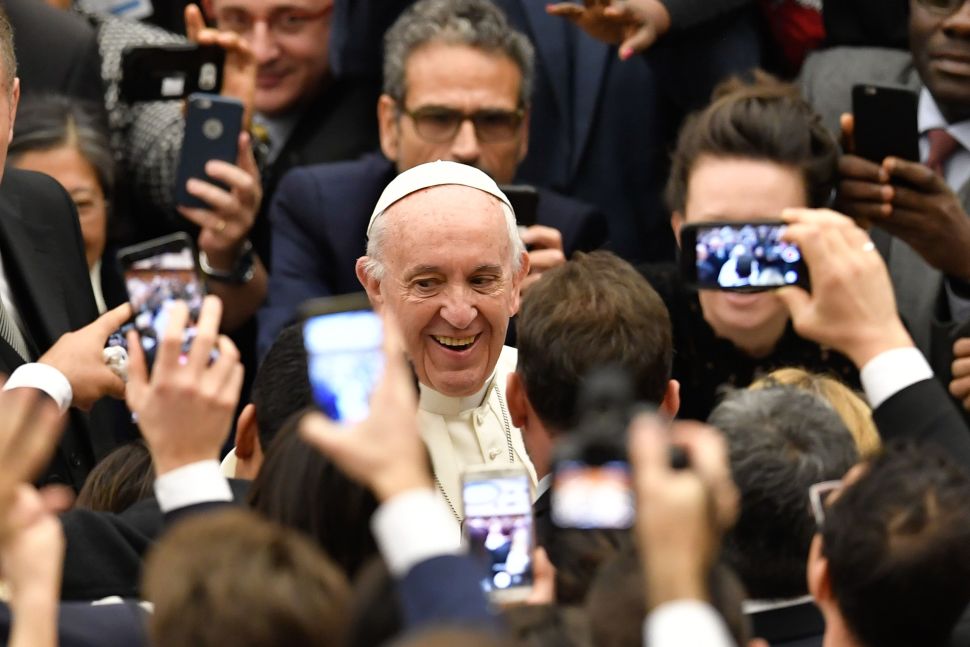