A hit with New York critics, if not the bewildered public, Paul Thomas Anderson’s odd, elegant romantic drama Phantom Thread has finally opened in cinemas nationwide. Gorgeous camerawork weaves a rich tapestry as the backdrop for this unconventional tale of obsession, desire, and hidden emotions starring Daniel Day-Lewis as a London couturier in the 1950s. Nevertheless, as impeccably made and beautiful to look at as it is, Phantom Thread, under close scrutiny, is a disappointment, as elusive as its meaningless title.

In what he proclaims will be his final film, Mr. Day-Lewis plays a neurotic, self-obsessed dress designer named Reynolds Woodcock who gives the word “eccentric” new meaning. Rumored to be based on both Balenciaga and Charles James, Reynolds is a genius with a yard of taffeta, but an empty shell as a man—antisocial, demanding, exasperating and cruel. His only lasting attachment is to his sister Cyril (Lesley Manville), who runs his designing business, dominates his life, and pours his tea. (Earl Grey, probably.)

A confirmed bachelor, never married and set in his infuriating ways to the point of madness, he one day meets a shy, working-class waitress named Alma (Vicky Krieps)—nothing special to look at, but a pleasant disposition—and begins a strange personal relationship that seems logical only to director-writer Anderson. Skinny and awkward, her bones are all wrong and she’s too flat-chested to fill his gowns with any commercial oomph, but on his arm and in his designs, Alma feels perfect. Cyril is appalled by Alma’s intrusion into her brother’s organized, fashionable and celebrated life and does everything she can think of to get rid of her. But Alma adapts to luxury and privilege fast, and cleverly wages a female power struggle to gain control of Reynolds. Alma’s taste and opinions are always challenged and discouraged, and Cyril is always right. She knows how to handle her brother. His routine must go uninterrupted, his mood swings tolerated, and under no circumstances must he be subjected to any noises whatsoever during breakfast. Reynolds feels challenged and annoyed, Alma feels suffocated and imprisoned, and Cyril surveys silently with her Giaconda smile.

Until she doesn’t. Reynolds does an uncharacteristic about face, makes Alma his chief model, and marries the interloper. When Alma makes the fatal mistake of falling in love, everything backfires. In a scheme to bring Reynolds closer by cooking him a special dinner, he flies into an arrogant rage over the flawed preparation of the asparagus. He really is an unbearable and contemptuous lover, but before Alma decides to break away and escape freedom, the ultimate strategy: hoping to win his love another way, through gratitude, Alma wafts through the woods to dig poison mushrooms. She wins, but triumph is only temporary. Reynolds likes the idea of being nursed back to health and wants more. So if a near-death experience can restore the marriage, it’s back to the mushroom patch.

P.T. Anderson’s movies are never coherent enough to appeal to the mainstream, but this one is so ravishing and meticulous and exquisite that you have no difficulty ignoring its inherent lack of logic. It’s not much of a vehicle to show off Mr.Day-Lewis’ plangent talents, but the way he controls the film with an inner ennui that is positively three-dimensional makes for fascinating acting technique that rivets attention. There isn’t much plot or action, either, and the conclusion is incongruous, but I liked Phantom Thread in spite of its flaws. It’s a contemporary slant on those great Victorian Gothic melodramas from the good old days, like Ivy and Dragonwyck—the kind of thing Gene Tierney used to do in her sleep. Alas, they made a great more sense than Phantom Thread and stuck with you longer. 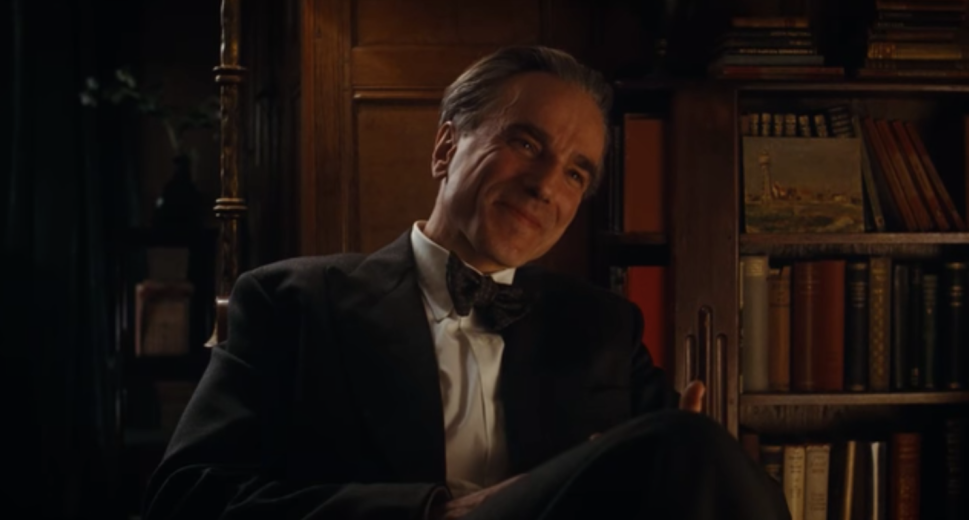