The great fiasco thus far in Peter Gelb‘s incumbency at the Metropolitan Opera has been a muddled 2009 post-modern attempt by director Luc Bondy to address the violent and nihilistic aspects of Puccini’s Tosca. That debacle was”redeemed” last night when the company unveiled a listless new production of the melodrama hobbled by inert dramaturgy and slovenly musical values.

Amid the metaphorical and and literal murk of this “gala” performance, one spark shone out, the role debut of soprano Sonya Yoncheva as the mercurial diva Floria Tosca. Her luxurious dark voice balanced lyric warmth with a hint of dramatic steel at the very top of range, and she fearlessly plunged into blood-curdling chest tones in moments of peak frenzy.

A striking aspect of Yoncheva’s art is that, like Anna Netrebko and Angela Gheorghiu before her, she seems always to favor legato singing, even at the risk of momentary lack of incisiveness. As such, the soprano’s approach to the celebrated prayer “Vissi d’Arte” amounted to a splendid surge of sensually beautiful sound with only a hint of the angst of a woman begging God to rescue her from impending rape.

As Tosca’s lover, the political activist Cavaradossi, tenor Vittorio Grigolo took a different and complementary approach, belting out his music with a vehement fervor that might daunt the most wild-eyed Bernie Bro. “I die in desperation!” Mario cries in his third act aria, and when Grigolo sang that line, you expected at the very least a gush of blood. The tenor survived long enough not only to take an over-the-top curtain call, but to clamber down off the raked stage to retrieve a poorly-aimed bouquet tossed to Yoncheva.

Relative to this lively pair, the Scarpia of Zeljko Lucic seemed to plod, offering not much more than a full sound that tended to hug the underside of the pitch.

Neither he nor anyone else whipped up much drama in David McVicar‘s diorama of a production, which mostly left the principals to wander about in front of John Macfarlane’s heavily photorealistic sets. The comings and goings of the intrigue-fueled first act bewildered, and the bungled Te Deum procession made no sense, whether dramatic or liturgical. The murder scene deviated from century-old tradition only in the addition of some pointless balletic swooping for the avenging diva. And the final coup de théâtre, the heroine’s suicide, amounted to a timid hop off a “parapet” barely three feet high.

After a promising start, with a tingly attack on the opera’s eerie opening fanfare, conductor Emmanuel Villaume fell apart bit by bit, fluffing innumerable details of Tosca‘s notoriously tricky in-and-out rhythms. Nobody ever gets every little tempo change exactly right, but the trick of making this opera work in the theater is cleaning up all those little mistake on the fly, without ever letting the tension drop. Once Villaume got into the heavy weeds of the second act, he kept stopping to regroup; the effect was deadly, but not in the way Puccini had in mind.

Admittedly this production has been operating under what seems to a truly operatic level of cursed misfortune: in the course of 2017 three leading singers and two conductors dropped out under various pretexts. And yet you expect better from the Metropolitan Opera.

Among the VIPs at this gala were Bill and Hillary Clinton, who won applause and bravos from the audience once the lights came up. After this shambles of a Tosca, maybe the Met should invite this savvy power couple to advise the company on crisis management. 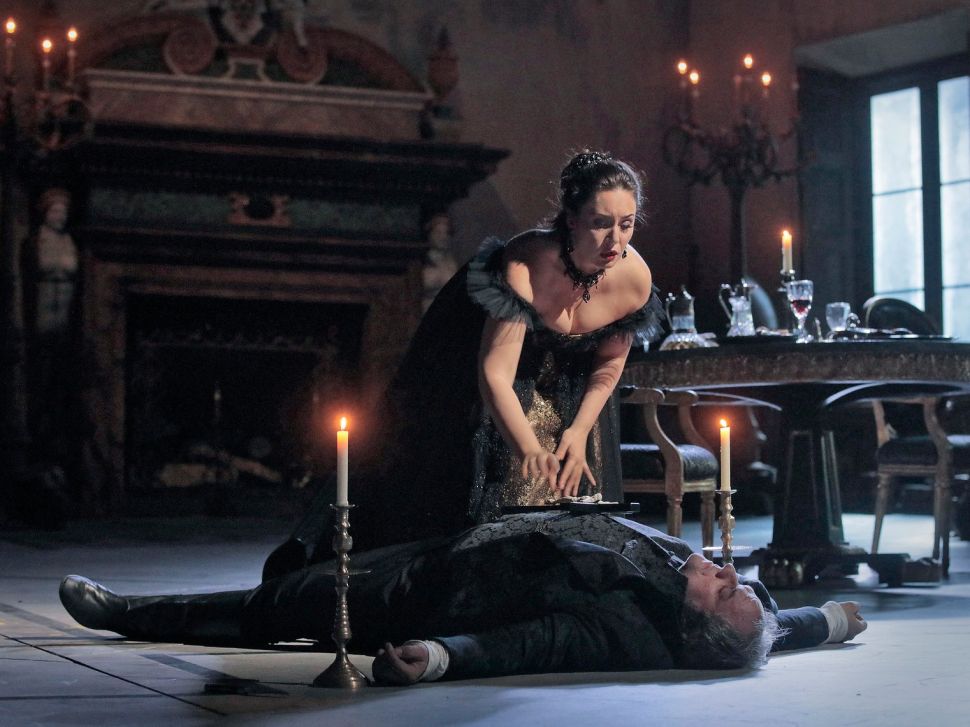