Rudely labeled by one critic “the Alzheimer’s road movie,” The Leisure Seeker is a big mistake in the considerable careers of Helen Mirren and Donald Sutherland. I wish I could disagree with the assessment just quoted, but I’m afraid it just about covers everything in an unfortunate love story for seniors that never quite comes alive despite the charming labors of its two talented stars. Movies about dying with dignity are always a box-office challenge, but this one doesn’t even qualify as a sad reflection on life’s bittersweet third act. It’s a soggy lump.

It’s August 2016 and Ella and John Spencer are nearing the end of their mortal coil. You know that because Ella has a nasty cough and John doesn’t know who or where he is half the time. So without a word of warning to their two adult children, Ella decides to pack up John and take one last vacation the way they did in the good old days, this time on an adventurous trip from their home in Massachusetts to Ernest Hemingway’s house in Key West. The “leisure seeker” is the name of the mobile camper they’ve stored in mothballs in the garage, and which miraculously it still runs.

John is so senile he can’t walk a straight line, but for some reason known only to director Paolo Virzi, who also wrote the screenplay with three other novices, John is the designated driver. This leads to a number of near-fatal accidents between inconsequential stops along the way and a never-ending connect-the-dots repartee. They stop at a Revolutionary War tableau in Virginia where he runs into a former student. Ella gets annoyed by his constant badgering about an old boyfriend who dumped her 50 years ago. After she gets accidentally left behind in a gas station, she catches up with him on the back of a motorcycle.

At its worst, there’s a dumb scene that is supposed to be funny but backfires loudly when, after discovering that he once had an affair with their next-door neighbor (a wasted Dana Ivey), Ella drags John to a retirement home for what seems to be the incurably insane, and deposits him there. Eventually, she collapses and there’s only one thing left to do, so she gets out the family gun and…don’t say I didn’t warn you.

There are occasional flashes of sweetness and charm, but the parts don’t add up to anything substantial. The genuine way these two old pros play off each other without overacting can often be poignant, but to no avail. Helen Mirren can play anything, from British queens to bordello madams in Las Vegas, and Donald Sutherland is touching as his confusion comes and goes. She has power and command in the way she protects and takes care of him, never quite able to accept his hopeless dementia. But the exaggeration that borders on silliness mires them both in a time-wasting toll on their versatility.

And so The Leisure Seeker uses up the surplus energy of two stars who are always worth watching, even when trying to breathe life into stale material. You marvel at their energy, but it’s a false energy that also leaves the viewer edgy, anxious and frustrated. With Mirren and Sutherland behind the wheel, you can enjoy the flaws of a clumsy movie without feeling guilty, but there’s not enough emotional depth in The Leisure Seeker about coping with what life delivers in old age to rise above a surface that can only be described as shallow. 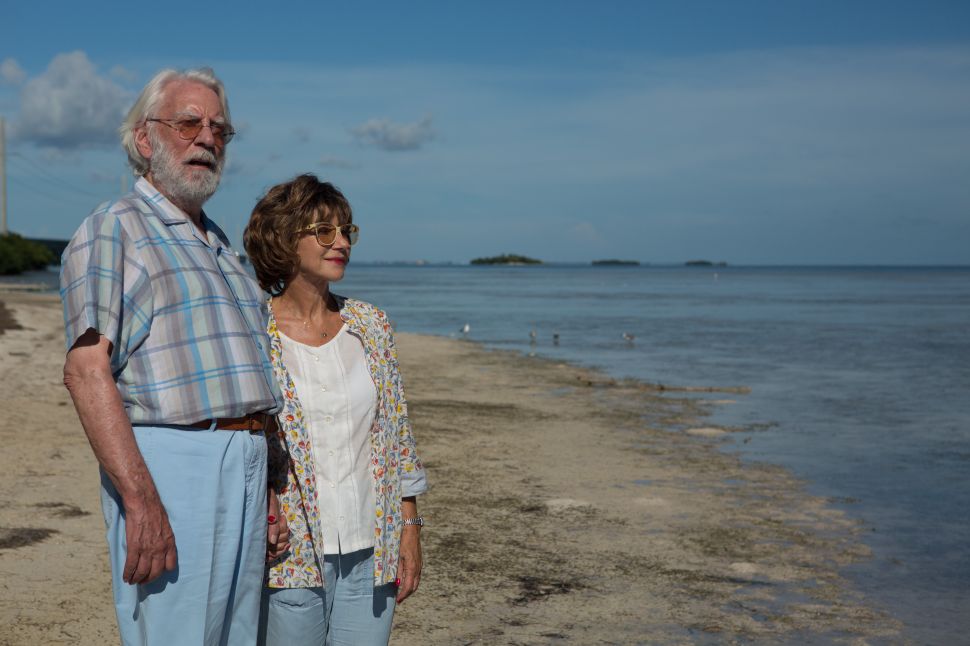